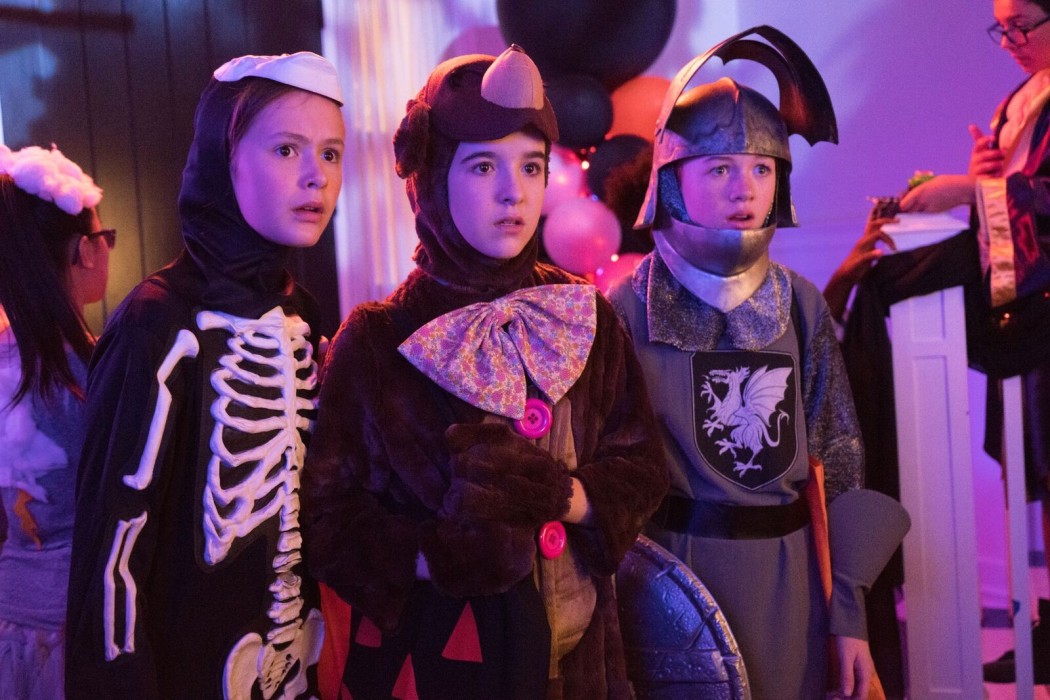 When it comes to children’s programming, Amazon has been hitting it out of the park each time. One of their newest shows “Just Add Magic” has become a certified hit. The series had the most successful Amazon Original Kids premiere weekend for its US Prime Video streams and hours for the show’s first season release.

Season two is ready to start in a big way. ‘Just Add Magic Halloween’ is a special themed episode that launches on Amazon Prime today. Although the rest of season two releases in 2017, fans will be able to enjoy this Halloween adventure as the girls go back to last Halloween in order to get a important ingredient.

The special picks off right where the first season left off, with the curse on the town broken only to have an old enemy, Chuck Hankins, back in Saffron Falls. In fear of him seeking revenge, Kelly [Olivia Sanabia], Hannah [Aubrey K. Miller], and Darbie [Abby Donnelly] set out to cook a spell to locate Chuck.

Abby confirms to Teenplicity that when the girls discover Chuck’s curse has been broken, she says, “We realize we need to find him.”

If the girls were to find him, Abby explains, “Kelly, Darbie, and Hannah would ask Chuck what he is doing in Saffron Falls and where he came from.”

However, there’s one small snag in their plan: an important ingredient for their recipe to find Chuck only blooms once a year on Halloween. This causes the trio to cook ‘Pick-A-Date Dates’ which they use to go back to last Halloween to grab this ingredient.

“We encounter friendship obstacles and a classmate the audience hasn’t seen in a while,” Abby reveals of what will happen when they travel back in time. “We also run into ourselves!”

Time travel is never an easy feat and has multiple consequences if not treated with care. The young actress teases, “Yes, some actions do affect the future, but you really have to pay close attention to find them. Hint: one of them is food related!”

As for what is her favorite part of the Halloween special, Abby says with a laugh, “I absolutely loved being the Dar-bee!” That got a chuckle from Teenplicity too.

“Darbie is still her lovable self,” she says of what her character is like in ‘Just Add Magic Halloween’, “but she is extra excited about traveling through time and going back to Halloween (to get candy again).”

Although Halloween is definitely at the top of the list for many people to travel to if they had the ability, Abby has a different idea.

“I would travel back to the day the musical Hamilton opened on Broadway, so I could watch it in the front row!” she says. “Lin-Manuel Miranda is my idol.”

For the rest of season two of “Just Add Magic”, the young actress teases that fans can expect lots of interesting foods and plenty of new mysteries! One thing in particular that she’s excited about is for fans to see more of her character.

“I am so excited for them to see the new plot twists and get a peek into Darbie’s family life,” Abby gushes.

“Everyone on the show worked hard to make season two even more exciting – from the writers to wardrobe to the person who makes all the food look so good. It really is a team effort!”

Fans are part of that team effort too. Their enthusiasm for the show has helped to become the great success that it is.

To her fans, Abby says, “I would like to say thank you so much for all your support! You guys are the reason I love making episodes of ‘Just Add Magic’ and I really can’t wait for you to see them all!”

‘Just Add Magic Halloween’ is available to stream now on Amazon Prime. The rest of season two releases in 2017!

**ABOVE PHOTOS COURTESY OF AMAZON

With one season successfully under their belt and already a total of five NAACP awards, it’s safe to say ABC’s Black-ish is going places….