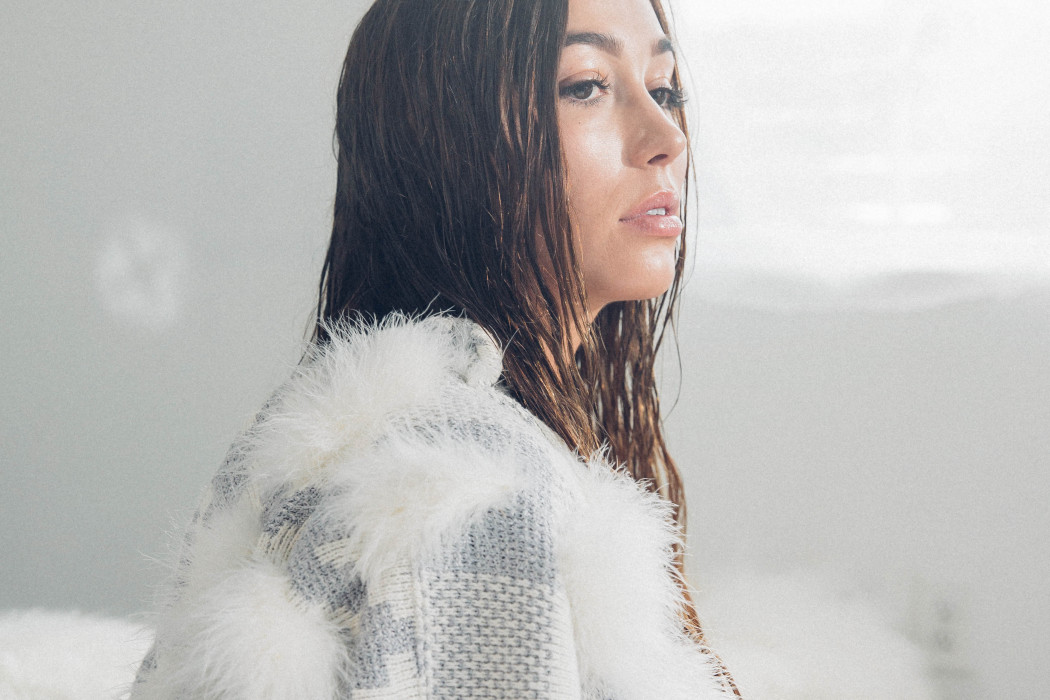 In life, sometimes the biggest risk is allowing someone to see you at your most vulnerable. Falling in love, and entrusting someone with your whole self, is as scary as it is rewarding. Nashville native Abigail Rose explores this in her new song, “The Risk”.

A sensual, dark-pop track with R&B influence, described by the songstress, “The Risk” brings listeners to the journey of leaving oneself completely unguarded and their soul bare for the one they are with. The bridge, which begins with questions asking if they are terrified and if they should close their eyes, concludes that it is best to love and get burned than to not know it at all.

In fact, the ending of the bridge is Abigail’s favorite part.

“‘…but I rather burn than not know love,’” she quotes. “It sums up the whole message of the song in a few words.” The singer-songwriter confesses that when she was recording this part, she didn’t even know the line when she was laying down the first rough vocal. “But then I just said it and it felt right.” Co-writer and Nashville producer Tyler Murray agreed with her that it worked out well. “The best moments and lyrics in songs are usually the ones that come most naturally,” she says.

“I wrote this song from a very personal place, when I first started to truly understand what it meant to be emotionally vulnerable with someone,” reveals Abigail. “Writing songs is usually my way to process my emotions & feelings, and this song was no exception.”

Declaring herself a visual person when writing a song, the songstress says she’s usually playing out a music video in her head already while writing. When Teenplicity spoke to Abigail ahead of the video release for “The Risk” – Watch It Here – she called it her “utopian dreamland come to life”. “[The video] turned out even better than what I had in my mind,” she gushes.

Abigail cites a lot of singer-songwriter, R&B, and Indi-pop influences as the musical inspirations when it came to creating “The Risk”. “I had been listening to a lot of Kevin Garret, SOHN, Rihanna and Kehlani!” she gives as some examples.

When it came to crafting the song in the studio, the process felt very organic according to the singer.

“When I originally went into the studio to start recording new music, all I had in mind was I wanted to create something authentically me, and whatever that looked like would be great, as long as I was being honest.” She gives credit to Tyler Murray for helping bring her vision to life.

Abigail recalls the admiration her family and a few close friends had for “The Risk” when she began sharing her new music with them. “‘The Risk’ seemed to always be the one they mentioned really loving… so I thought I wouldn’t ignore this and decided ‘The Risk’ was a great first single to introduce who Abigail Rose is to the world!”

While the world is learning about Abigail Rose, the songstress is learning more about herself. “I’m learning more about myself as an artist every day!” she exclaims. “I’ve learned that sometimes good things take time but if you put in the effort and attention to detail, people will notice and the feeling when your hard work and passion is appreciated is amazing.”

The hard work she has put in over the years show as she’s grown musically through her songwriting.

“I’m writing from my personal experiences much more than I ever did when I was younger,” reveals Abigail as she compares her old songs to her new ones. “I think as a writer, as you grow and mature, you naturally get better at saying things your own way! I’ve found my lyrical voice.”

This certainly is a cause for celebration, which is exactly what herself, family, and friends did with the release of “The Risk”, showing how much knowledge she’s gained and cultivated over the years. “It was so much fun!” she says of the release celebration. “I love any good excuse to get everyone I love together in one room and celebrate!” Abigail gushes. With those who know her already loving “The Risk”, the only uncertainty was the public.

“The reactions [for ‘The Risk’] have been overwhelming and surreal. The most reoccurring compliment is how much people love my style and vibe, and that really means a lot to me. Especially because I don’t know if anyone was expecting the direction I went in musically so that obviously made me a little more nervous to hear what people thought.”

Abigail describes the surprises that come with releasing music, saying “Whenever you do something big in life – for me it was releasing new music – I think you’re able to see who is really there for you and who isn’t. So seeing some people’s true colors and who my real friends are is what probably surprised me the most.” The experience overall has it reiterated to her how very lucky she is to have so many people supporting her. “Releasing music has been a good reminder of who those people are.”

There is no doubt that these people will be alongside Abigail on her journey, even as she faces her biggest fear – becoming boring or average.

“I strive to be different and unique in every way I can. I’m not sure if I’ll ever get over this,” Abigail confesses. “I think a little fear is sometimes a good thing because it keeps you on your toes. I do hope, though, over time I get more confident in all my choices and realize as long as I’m being myself, I’ll be good.”

With more music coming soon, excitement is beginning to rise to see what else the Nashville starlit will create. “Expect the unexpected,” she says with a laugh. “No two songs have the exact same vibe… they’re all their own thing, which is a by-product of just making music I’m passionate about and not caring about anything else.”

Continuing on this uphill climb to stardom, it’s easy to look at goals one hopes to accomplish. For Abigail, a glance two years into the future will see her performing a lot and touring in the United States, as well as – hopefully – Europe. “I hope to have written, recorded, and released a full length album! I hope to continue to be working with creative, talented people that think outside the box and push me out of my comfort zones.” She adds some advice for her future self. “I would tell myself to never forget why I started this journey in the first place – because I LOVE writing, performing, and sharing my music with people!”

“The Risk” is available for streaming on Spotify and purchase on iTunes!