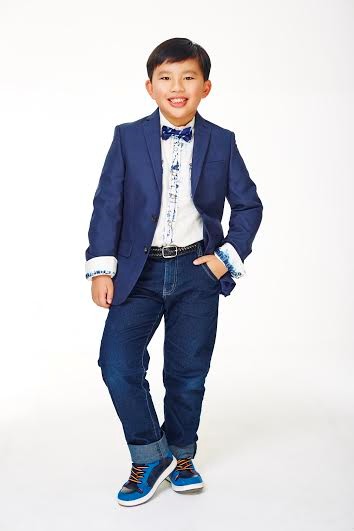 ABC is the home for Albert Tsai’s talent once more! Albert, a former cast member of ABC’s “Trophy Wife”, is back on the network with freshman comedy “Dr. Ken”!

“Dr. Ken” follows a doctor, played by Ken Jeong, as he tries to find a balance between his career, family, and daily struggles.
“It feels great to be back on ABC! I love the show and I get to do multi-cam, which isn’t like ‘Trophy Wife,'” Albert says, referring to the single camera shooting of the former comedy series. “On multi-cam, we have live tapings every Tuesday which are really fun.”
In fact, live tapings are one of Albert’s favorite aspect of the new show. He gushes, “I love how when the audience is there, there’s so much energy and we also get that feedback because if we do a joke and it gets a big laugh from the audience, we know it’ll work on TV.”
While filming “Dr. Ken”, Albert was able to really discover his love for live tapings. “I found out I really liked having an audience there… I feel like having the audience there, laughing and laughing, and cheering us on, really helps me and gives me an adrenaline rush.”
Thinking back to when he received news that “Dr. Ken” was getting a full season, Albert remembers his immense excitement. “I was jumping around!” he exclaims.
He recalls how he wasn’t on set at the time, the day of a live taping, and had received a call from Ken.
“Ken called me and I was like, ‘Yeah, Ken?’ He was like, ‘We got the back nine!'” he says, referring to the series going from the original 13 episodes to a full season of 22.
“I was jumping, I was so excited!”
Albert plays Dave on the comedy series, Dr. Ken’s youngest and most eccentric child. Albert describes him as “off-beat because of his unique qualities”, like miming and attending city council meetings.
“You’ll see [Dave] in more interesting and funny story lines, exploring his personality and interests – what he likes to do,” he says of what fans can expect during the rest of the season.
Albert counts the biggest similarity between himself and his character is that they both like to read, recalling the episode in which Dave is brought to the reading of his favorite biography but falls asleep as he’s exhausted from all of his excitement!
“I love reading fiction and non-fiction,” Albert says of his personal interests. “The non-fiction books I like reading, like [Dave], include biographies and I like reading history books since history is my favorite subject. I also like science and geography books! Those are cool as well.”
As for fiction, Albert is a big fan of Harry Potter and Percy Jackson!
“I love reading novels! Like recently, I had finished the Harry Potter series. I love [it]! I’ve read all of the books and watched all of the movies! I’m a giant fan,” he explains. He adds that he went to Universal and saw the Wizarding World of Harry Potter for Thanksgiving.
“Also, right now I’m into Greek mythologies,” Albert says. He recently finished the Percy Jackson series as well. “It’s really good, especially if you like Greek mythology,” he says of the books. “It kind of takes Greek mythologies and puts the gods and all the monsters in the modern world, kind of like Harry Potter with the parallel universe thing.”
Back in the world of “Dr. Ken” however, the family will be finding themselves in a tropical location shortly.
“We recently did an episode called ‘Delayed in Honolulu’ which is going to come out in January right after the Christmas hiatus.” Speaking of the episode, Albert reveals that Dr. Oz is guest starring. He says, “Dave has, again, another interesting little hobby that he does.”
Albert spilled a line from the episode which he claims hints to what Dave will be doing in the episode. The line is from his character who says, “Daddy needs a new pair of shoes!”
Another popular ABC comedy is “Fresh Off the Boat”, which Albert will be guest starring on.
For his newest episode on the other ABC series, his character Phillip and Jessica don’t get along again. “But this time,” Albert says, “it involves Louis as well and it involves Cattleman’s Ranch! It was really cool to film on the set of Cattleman’s Ranch!”
Wrapping his stint on “Fresh Off the Boat” last month, Albert is focusing on “Dr. Ken” for the moment.
To his fans, Albert thanks them for their support, citing his immense gratitude and love for them all.
“Dr. Ken” returns to ABC this January!

Monday Musings: 7 Reasons Why “Me” Should Be Your New Favorite Song

Check out Mary’s 7 reasons on why “Me” by Laura Marano should be your new favorite song!