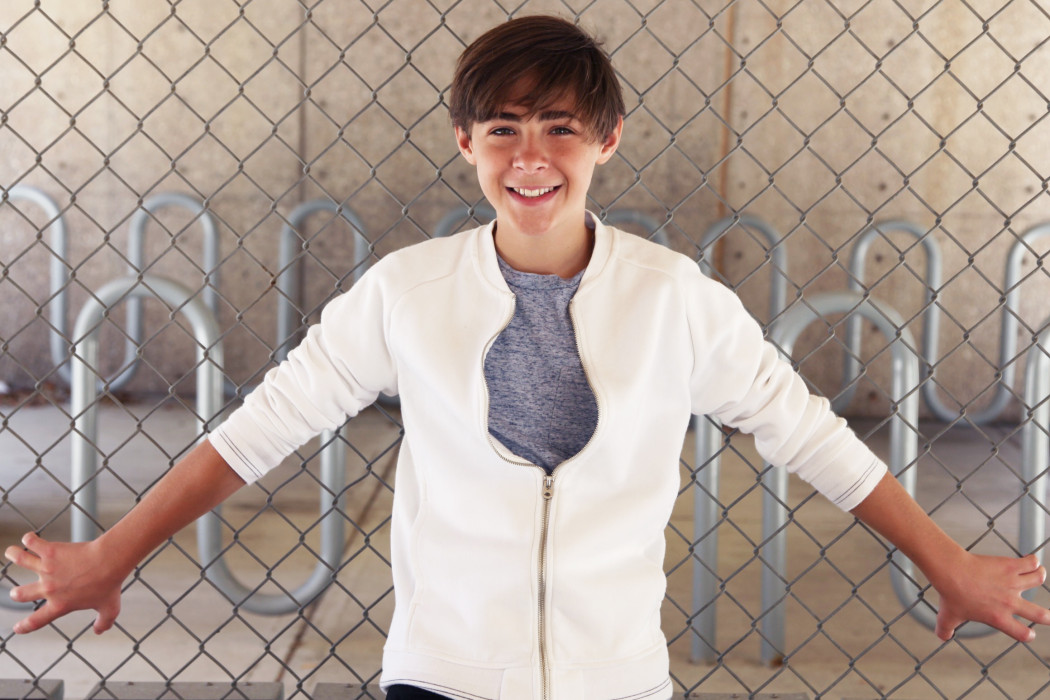 At thirteen years old, Anton Starkman has already had roles on Comedy Central’s Drunk History, MTV’s Teen Wolf, Freeform’s Dead of Summer, and most notably FX’s American Horror Story. This Fall, Anton will be seen in the Awesomeness Films movie Shovel Buddies and will be giving his voice to the character Nate in the Warner Brothers movie Storks.

Thanks to his two older brothers, Anton began his career in acting after his mom signed them in a theatrical agent in Los Angeles. 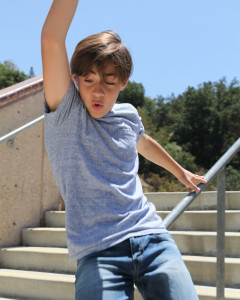 From playing a young Bugsy Siegel while pretending to be sound intoxicated to playing a vampire, Anton has no doubt been able to not only do cool things but stretch out his imagination. “The coolest thing I’ve gotten to do is to see and hear my voice for the first time with a drawing of a boy named Nate in the movie Storks,” Anton started out the interview. “When I started recording it was just my voice into a microphone but when I went back the next time this boy who looked like me was talking like me, too. So cool.”

He expands on this later on in our interview when he talks about what it’s like to see the process of an animated movie grow, “To see my character Nate start off as a black and white stick figure type of drawing to having color and details that are so real was an incredible experience to see. Nate has some of my mannerisms which was a surprise to me.”

Coming out September 23rd, Storks tells the story of a world where instead of delivering babies, storks deliver packages for a huge online store. When top stork Junior (Andy Samberg) accidentally creates a baby girl after activating a baby making machine, comedy ensues as Junior and Tulip (Katie Crown) must deliver the baby before Junior’s boss finds out. The movie also follows Anton’s character Nate who wants a little brother so badly despite his parents differing opinions on having another son.

“It’s an unbelievable privilege to have Jennifer Aniston and Ty Burrell be the voices of my parents. I’m so excited to meet both of them,” He says when asked about if there is anyone from the cast that he’s super excited to meet as the premiere nears. “I think it’s amazing that as actors they love this movie as much as I do. Any actor that can bring a character to life with just their voice is very inspiring.”

Anton ensures that no matter what age you are watching Storks, you’re bound to fall in love with it saying that his favorite thing about it personally is the heart it has.

“The audition process for Storks was just like any other. They wanted someone that sounded like a normal boy. I was already pretty good at that,” he jokes. “They started off having me do scratch vocals so they could build Nate. Then they told me they had chosen to cast me as Nate. At the time I didn’t really know how cool that was but I do now.”

Needless to say, Anton has nothing but high praises for the upcoming and highly anticipated family film which is significantly different from his other roles so far. “The easiest time I had to get into character was on Storks because everyone involved with the creative process is so happy and cheerful that it made me feel the same way,”  He began his response about the easiest and hardest characters for him to play. “The hardest character to get into was Max on American Horror Story. I don’t feel scary or creepy on the inside so playing a character like Max was hard every time.”

Anton has mentioned before in his interview with iTalk Movies that he originally became familiar with American Horror Story because of his brother being such a huge fan. Him, on the other hand, while he played an important role on the show doesn’t necessarily watch the show in his spare time. “It is much scarier to see my scenes on television than when we shoot them,” he says. “I know it seems strange but standing in a room full of blood just seems like paint. It’s the way they use the camera combined with the music and sound. I can only watch my scenes, the others are too scary.”

Still, working on Ryan Murphy’s mature anthologist hit, Anton admits he was able to take away lessons as an actor from his experience, “On American Horror Story I worked with some of the nicest stars anyone could hope to work with. Kathy Bates and Denis O’hare are at the top of the list. Obviously professional but down to earth and super nice too, and that’s how I want to be looked at onset. I also learned that each shot should be performed a different way.”

“If I could go back and play a character it would have to be Charlie Chaplin or Thomas Edison,” he answered when I briefly asked him about who he would like to play if he ever got to return back to Comedy Central’s Drunk History. “Charlie Chaplin because he played a completely different character on screen then he was off screen. He was a businessman off screen. Thomas Edison is also fascinating because I think I could be an inventor if I wasn’t acting.”

Going off of his interest with inventing, he also enjoys baseball, photography, art, and architecture. “I’ve always loved to draw and one day I was watching a show about building things. My mom talked to me about what I might want to do if ever I decided to do something other than act. We talked about what I already like to do and architecture was one possibility. I haven’t had too much time to look into it yet but maybe I will in college,” He shared about how his interest in architecture started when he was younger. ‘Or maybe I’ll play trumpet, I’ve played that for the past two years. We’ll see how it goes.” 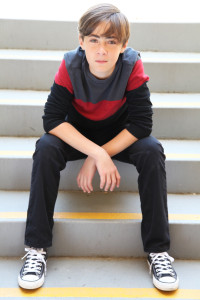 For the time being, Anton is sticking with acting as his main profession. “The thing I’m most excited about when Shovel Buddies releases is that people will see me as a different character,” he shares about his role in Shovel Buddies starring alongside Bella Thorne, Jenny Cooper, and Youtuber Kian Lawley. “Not scary or childish. [My character], Lump in Shovel Buddies carries a lot of weight trying to keep up with his brother and his friends. He’s hanging out with the big kids now.”

Shovel Buddies tells the story of Lump and his older brother Jimmy’s friends trying to fulfill Jimmy’s wish to be buried in his favorite football jersey after he dies of leukemia.

“I am the youngest of three boys in my real family. My brother Wyatt is 21 and my middle brother Landen is 18, both are very close to the character’s ages in Shovel Buddies,” Anton begins about how he brought some of his personality into the character of Lump. “I feel exactly the same way at home that Lump does, always trying to be included but not always making the cut.”

Asking one of my favorite questions to ask young and new-ish actors/actresses, I asked Anton if there was a movie or television show he could be on, what would he choose and what would he want to play, “If they ever make a movie of the book series The Unwanteds or The Accelerati Trilogy I would love to play the lead characters. Both are sci/fi fantasy type books. Like Harry Potter meets The Hunger Games.”

Reflecting more on what he’s learned from working on so many different projects, Anton proves that you can learn from just about everything, “I’ve learned many things with every project. It might be from costars, production crew or even my set teacher. The things I’ve learned vary from always being ready to film when the director calls me to set to always knowing where craft service is.”

We all know the movie trope: a group of young adults going on a trip together to a place far from civilization and then…