Full House was the show that launched the careers of multiple stars, taught numerous generations lessons, and let fans know that everywhere they look, there’s a heart and a hand to hold on to. The familiar catchphrases from favorite characters are some that have stuck with fans long after the show ended more than two decades ago.

For a show with such a great impact, the excitement amongst new and longtime fans was outstanding when the announcement for a spinoff came. And that excitement stayed.

Fuller House, the sequel series to the late ‘80s/early ‘90s family classic, follows daughter D.J. Fuller, nee Tanner, as she navigates life as a single mom of three children after the recent passing of her husband. Enlisting the help of her sister Stephanie Tanner and best friend Kimmy Gibbler, as well as her own daughter Ramona, Fuller House gave a fresh, new spin on the concept of the original series.

Ashley Liao is one of the fresh faces that has been added to the Full(er) House family. Appearing prominently throughout the first season of the Netflix series as Lola, she is the best friend of Ramona and crush of D.J.’s son Jackson.

“I originally did not know about the huge following of Full House when I got the audition,” Ashley admits. She goes on to say, “I watched a few episodes of Full House as a kid, but had no idea that the fan base was this big!” Maybe that was a good thing, as the only thing Ashley was nervous about when it came to her audition was nailing the role. “I would not say I was nervous for my audition, but I was nervous because I really loved the role of Lola and wanted to do well.”

Ashley and her character Lola quickly became a favorite amongst fans and those involved with the show as, along with the announcement of a season two renewal, Ashley was added as a series regular. 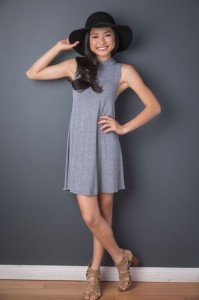 She recalls her initial reaction to be excitement. “I was really excited to come back and film with my Fuller House family,” she exclaims.

When it comes to what is in store for her character in this new season, at the time of her interview with Teenplicity, Ashley didn’t know much of what the future held. However, she’s all for exploring more of the kindling romance between Lola and Jackson. “I do not know the full plot of Fuller House Season 2, but I am hopeful that there will be more of #Jola.”

Ashley is also hopeful for the prospect of character growth for Lola. “I hope that Lola can bring more heartfelt and tender moments to the show,” she says. Whether it’s commenting on the designs of dance team uniforms or going to a baseball game with Ramona and Jackson, Lola is definitely not afraid to speak her mind and viewers get to enjoy every moment. “She is already comedic, so I feel that this would be a good switch up.”

Teenplicity asked Ashley what the plot would be for a season two episode if she had the chance to write it and one word to describe it would be tropical.

“I would probably have the family, Lola, Matt, Steve, and of course Cosmo all go to Hawaii,” Ashley enthuses. “Hawaii is my favorite place, so I would write the episode to take place there so the cast could squeeze in a quick vaycay!” Hopefully it’ll mean a better time for the Fuller family and friends than it did for the Tanners way back when, and that they won’t get deserted on the wrong side of one of the islands.

In addition to becoming a series regular on Fuller House, Ashley has a lot of other projects up her sleeve like guest appearing on Fresh Off the Boat and The Kicks as well as starring in the movie “Jessica Darling’s It List”.

Her episode of Fresh Off the Boat premiered on ABC back in May. The premise of the episode is when main character Eddie fears that his mother will not approve of his girlfriend Allison since she is not Chinese. Allison then enlists the help of her friend to win her over.

Looking back on her experience, Ashley says that it was a ton of fun to film. “My episode in particular was really funny!” she adds enthusiastically.

“The thing that excited me the most on being in Fresh Off the Boat was that this was a show that I really enjoyed watching. It was amazing to see the actors that I had watched on TV in real life! Being on a show that brings so much diversity to television is super awesome.”

The Kicks is a show about a girls’ soccer team. “It is based off a series of books written by Alex Morgan, an Olympic gold medalist for the U.S. Women’s Soccer Team,” Ashley explains.

In “Jessica Darling’s It List”, Ashley nabs one of her first major leading roles. However, she says that the process was pretty similar to how she auditioned for other roles. “I went in for a regular audition with the casting director and then had a callback/chemistry read where I read with the other actors. After these two auditions, I found out I got the role of Manda!”

Manda, the young actress describes, is a very stylish and spunky girl. “Playing the role of Manda was a ton of fun!”

When she’s not starring in multiple television shows and movies, Ashley is a regular teen like anyone else. Recently she’s learned the importance of good friendships, especially now with her busy schedule.

“Doing online school, I have not been able to go to regular high school like the rest of my friends do. This made me appreciate spending time with my close group of friends.”

However, if she ever wants to talk to someone while her friends are at school, she has an abundance of fans that she’s extremely thankful for and are always there for her. She appreciates all the love and support that they’ve given her and her characters.

“I love seeing all the edits, posts, and comments on social media. It makes what I do even more rewarding,” she exclaims. “Hugs!”

Fuller House is available for streaming on Netflix now. You can contact Ashley on Twitter at @ashleyjliao!

Lindsey Morgan talks The 100 and Identity

A true Southern Belle at heart, Lindsey Morgan was born in Georgia and raised in Texas where she began her acting career during her…