Past ‘The Voice’ contestants form The Fourth Kingdom and discuss their journey from the show to a rising band worldwide, and their new single “Broken”.

With its haunting musical sound and the message of hurt that accompanies heartbreak, “Broken” proves to be a daring, yet brilliant, choice for upcoming guy group The Fourth Kingdom. Often dubbing their name to simply “4TK”, the Belgium-based band knew the potential “Broken” had to be a single and were glad when their management decided to make it their debut single in the United States.

“We wrote ‘Broken’ with Ty [Jamz] and MJ [Songstress]. The lyrics poured out of our heart, it was quite intense to create,” reveals the group. “‘Broken’ really strikes a chord with us and is a good representative of who we are as a band.”

The vocals throughout the single pull on the demanding emotions the lyrics call for. Listeners cannot help but have their hearts twisting in empathy, especially with the echoes of “You’re killing me,” as well as the gut-wrenching “Look at my heart break” line.

The guys describe “Broken” as being about the hurt of losing the one you love, and the breaking up of that relationship. “You know your girl is cheating on you but you go through the motions of denial, sometimes the reality is too hard to deal with.”

The lyrics poured out of our heart, it was quite intense to create.

It’s no surprise that the band decides the hook is one of their favorite parts of the song. “‘You got me broken, I’m in shattered, piece, girl you got me broken’ – It kind of says it all.”

When the music video dropped last month for “Broken”, the heartbreak was brought to a new level. The video had been filmed while the group stayed in New York earlier this year. The deep blue backdrops, mixing with the black shadows, fog, and the rain that covered the ground drives home the feeling of heartbreak experienced throughout the song. “We always set our mind to the hurt that somebody [is] going through when in a bad relationship,” the group says of the frame of mind they enter when performing the song. “It’s a very emotional state of mind.” 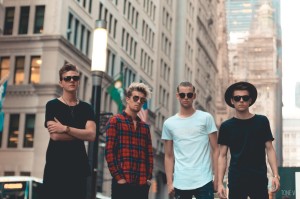 Despite how difficult it may be to put themselves in that mood, filming the music video for the single allowed them to have some fun. “Mine is when I am performing on the chair with the water pouring down,” says Sebastian of his favorite scene from the video. Meanwhile, Shane simply states his favorite was on top of the parking lot.

Jaxon gives a smile as he says, “Dropping the phone in the water,” referring to the end of the video.

“The shots together where they also shot the Fate of the Furious! EPIC SHOT!” Kyle adds, to which the entire group enthusiastically agrees.

We have all learned to appreciate one another’s opinion and turn it into our advantage being 4TK.

To see how the well the group has bonded together and enjoyed their time so far just adds to the chemistry seen in their music video. As individual performers on ‘The Voice Belgium’, the four members came together after the finals of the show, thanks to their manager Peter. “[He] put us together as a band. And here we are,” they say with a smile.

It’s clear that their manager had been on to something. The band says that they were all on the same page “quite fast” in terms of music. “Of course, we have our own favorites song-wise, but overall we have the same taste in music and we all adore acoustic songs!”

An important factor in their formation and growing success could be attributed to the fact they’ve already recognized that everybody has a say in the band.

“You need to understand that not everybody has the same opinion all the time,” admits the group. “We have all learned to appreciate one another’s opinion and turn it into our advantage being 4TK.” The band learns from one another and helps each other grow, they revealed. “Everybody has their own specialty but it all comes together as one.”

This formula has led them to work with artists like Flo Rida and Nicki Minaj on their music, which the group feels blessed to have the opportunities. “Working together with these great artists is like a dream come true,” they gush. “We come out of a small country in Europe, we never expected this could ever happen.” It helps that as they continue to gain momentum in the music industry, the four guys all have the same goal – changing people’s lives through their music. They are excited to do that this fall as they perform on the Digitour Goodtimes Fall Tour in the US. “Really looking forward to meeting our American fans!!” they exclaim. Hopefully fans will get to experience some new music as well, which they worked on while in New York. They describe the music as a mix from Urban, to Pop, to Acoustic. “That’s The Fourth Kingdom.”

You can watch The Fourth Kingdom’s music video for “Broken” here!

Get Ready To Catch April Kry

Some of the best surprises in life come in the most unexpected packages. A quick glance at country singer April Kry, one would assume…