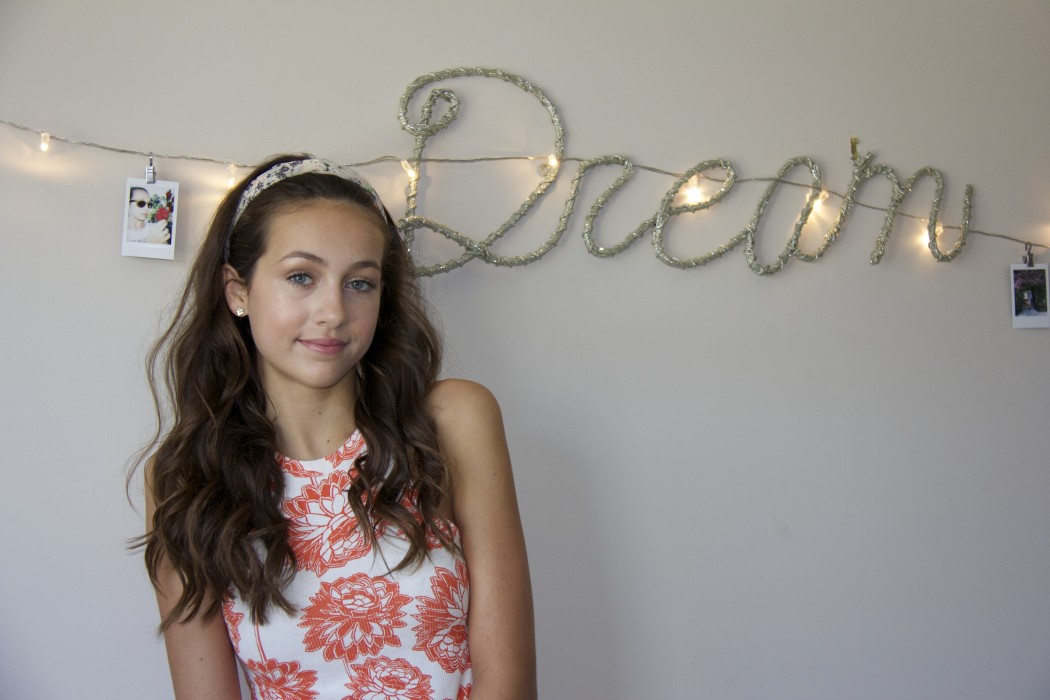 Absolutely sweet, passionate, and caring. If these are not the words that immediately come to mind when you hear the name Emma Fuhrmann, they will be. Just shy of the age of fourteen, Emma has accomplished and worked with more notable celebrities than others twice her age. Starting as a baby model at only eighteen months gave Emma the foundation to branch out as she got older. As she learned to read, she was able to work as an actress as well. Her big break came with the NBC crime drama Chase, in which she landed the role of Sissy Peele in the pilot. Following that, Emma booked the lead role in the film, “Magic of Belle Isle”. One of her costars in the film happened to be Morgan Freeman.

Morgan Freeman is just one name on an impressive list of actors that Emma has been fortunate to work with. Others include Adam Sandler, Drew Barrymore, and Bella Thorne. Recalling working with such actors, Emma says, “It has been amazing! All of them have a special place in my heart! I have to throw Virginia Madsen in here too, whom I worked with on “Magic of Belle Isle”. She taught me how to be thoughtful to the entire crew while on set. To this day, I know she is still watching out for me and taking care of me.”

Remembering how filming was like with Virginia, Emma speaks about the fun things she would think up on set. “With Virginia, she would come up with all of these cool things to do for certain days of the week! We had Mustache Mondays, White Castle Wednesdays, and we even brought in an ice cream truck and paid for all the cast and crew to eat ice cream!” Virginia Madsen was not the only one to leave an impression on Emma throughout her various films.

“Adam taught me that kindness matters! Morgan was so calm and professional. I think that really rubbed off on me. I learned so much from him; he is a true professional.” Turning to her humorous side, Emma continues, “Bella and I had to endure short, boyish wigs together, so we felt each other’s pain when they got hot and itched a lot!”

Emma Fuhrmann is surely building up her resume and she doesn’t plan on stopping acting any time soon. “I love acting!” Emma exclaims. “I love every aspect of it. I am hoping when I am older I can try other things like directing too! I am always looking for ways to expand my craft!” As for whom she’d love to work with in the future? “I would love to work with Steven Spielberg or Ron Howard!”

Although it’s not directing, Emma has branched out into fashion and makeup. “I just like how cute clothes can be an expression of your mood and how they can even change your mood!” she says. “Makeup is something I love to play around with and try out new things.” Of course, just like anyone else in the world, Emma is not immune to mishaps or nature. “Everyone has the random pimple that pops up out of nowhere that you have to cover up. That seems to happen to me on the first day of shooting a new film every time!” she exclaims. It’s kind of like if 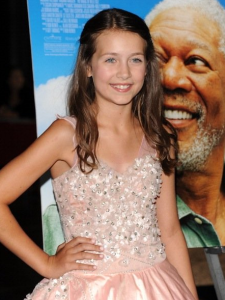 get a pimple on the first day of a new school year. Emma jokes, “That is why cover up and concealer was invented!”

Fashion “Oh-no!” moments happen to Emma as well. “At my first premiere (which was for ‘Magic of Belle Isle’), the dress we picked out was perfect! I was so young, so since the dress was originally strapless, we wanted to add straps to it. We found something that would work with the dress, so we had them temporarily sewn on. All night, I was so afraid the straps were going to come off but they did not!”

Laughter is how you get through it though. “I just think you have to laugh at the times that do not go as planned. It is what makes life interesting and possibly a lot more fun!”

“If you are starting out with makeup… YOUTUBE IS YOUR BEST FRIEND!!!” Emma passionately advises. “It can teach you everything!! My advice is to always keep it light and fresh so your face is glowing, not caked on.” She even offers up some makeup to use, which also happens to be from one of her co-star’s lines. “I recommend Drew Barrymore’s Flower Beauty products! They are reasonably priced and the quality is aammaaazing!”

Not sure if makeup is for you? It’s okay! You can keep it simple to figure out what works for you. “A little lip-gloss, a little mascara, some blush and you are all set!” Emma says. “You can throw in concealer for dark circles under your eyes or for those pesky blemishes.” One of Emma’s favorite makeup trends that you can use yourself is a good BB (Beauty/Blemish Balm) cream! “I feel like foundation is way too much for me and tinted moisturizer just soaks in. It does not keep my skin tone even all day, and does not last! But BB cream is the perfect in-between!”

As Emma has grown up in the spotlight, her style has changed over the years as well. This year however, Emma states that she’s “become more in touch with my style. I have realized that because I have long legs, I need to choose clothing that flatters my figure!” If you haven’t figured out what your style is yet, that’s normal. “You have to wear what makes you feel good and confident!” Emma says about discovering your own style. “I was once at a photo shoot and I was not the biggest fan of what I was wearing, but once I started feeling confident, I became a whole new person!”

Her passion in acting, modeling, and fashion is easy to be seen in all she does. What is possibly even more remarkable is her huge heart, which she uses to shed light on so many charities. When asked to pick her favorite charity to work with, Emma couldn’t decide on just one. She is involved in so many that it’s hard to believe that she can do that on top of her budding career. But she proves that giving back is very important and close to her heart.

“I do not think I can pick just one as they are all close to my heart,” she says, the honesty and love her has for all the charities she’s involved with evident. “ALZ.org (Alzheimer’s Association) will always be so special to me. My grandmother and another relative of mine died of ALZ and I have supported the association ever since. I will not stop until they find a cure!” Continuing on, Emma mentions Brat Pack 11. “A friend of mine started Brat Pack 11 (www.bratpack11.com), which helps grant wishes to children of fallen soldiers. I am now one of their celebrity ambassadors.” As a huge animal lover, it’s no surprise that she has also partnered with the Humane Society of the United States and with The Gentle Barn to raise awareness about animal welfare. Emma exclaims, “Animals need a voice too!”

“This is why it is so hard to pick one!” she says. “So many organizations are doing so much good in the world!”

Just because Emma has grown up in the entertainment business, it doesn’t mean that she’s used to and confident in everything that comes with it. “I actually had a huge fear of in-person interviews!” Emma recalls. “I would work myself up beforehand and get really nervous. I was so afraid I would say the wrong answer! My mom would tell me that if they are asking me the question and only I really know the answer, how could I say the wrong thing? That is how I overcame my fear of interviews! I basically just think to myself ‘I lived this experience’… so just tell what your experience was at the time! There are no wrong answers. Though, I cannot lie, I still get a little bit nervous before.”

Not only has Emma discovered her own style and overcome her fear of in-person interviews (Ah! Kind of like those class projects you have to present before everyone!), she’s also learned a bit more about herself. “I like the color pink more than I thought I did! I used to not link pink, but now it is not so bad!”

2015 is not yet over, and Emma is excited to announce what she’ll be doing to finish up this year and start 2016! “My film ‘Lost in the Sun’ with Josh Duhamel will be releasing this fall! I am also doing a short film for an amazing direction, Alex Yonks, called ‘A Taylor Story’ in October with my amazing teen co-stars Gavin Caselegno & Cozi Zuehlsdorff.”

Saving the best for last – we talked to Emma about her fans. Some of the most important people to Emma are her fans and she’s seriously blown away by what they can do. “I have had a couple fans tweet me or tag me on my social media a picture they drew of me!! It is so cool to see someone’s artistic abilities used to draw ME!” she says in amazement. “I am so in awe of what they can do and their support means the world to me!”

Be sure that you’re following Emma on Twitter and Instagram at @emmafuhrmann! She wants you to let her know if you’ve read this article!

Her last note to her fans is a simple one, but also one that means so much.

Actor Corey Fogelmanis breaks down his “PrankMe” character and the real-life consequences of thirst for social media stardom with Teenplicity. ***SPOILERS FOR SEASON ONE…