New Jersey native Heather Braverman is making waves in the music scene. Her music is described as a mix between R&B, pop, electronic, & rap and Heather seems unafraid to experiment on her new EP “Diamonds in the Dirt”. Writing music since the young of 11, time has allowed Heather to refine her craft.

“Music has always coursed through my life,” says Heather. “I don’t remember a time where music wasn’t a given for me.”

In fact, even when pursuing her acting career, the 18-year-old originated the role of Billie in the pop/rock musical “Gettin’ the Band Back Together”.

“When I was really young, I used to pretend I was Annie and Dorothy from Wizard of Oz,” confesses Heather, who even revealed that she had the dress, ruby slippers, and everything. “Watching these movies over and over again at home really instilled a fascination about music and storytelling for me that I never let go. It just kept growing.”

According to the singer, music always made sense to her.

“There was a time, though, when I was starting middle school and I discovered all this new music, like Lily Allen and Ingrid Michaelson and Vampire Weekend, and just freaked out. I was inspired and confused, but in a good way. That was when I started having a real respect for songwriting and rule breaking and just wanted to try to create something as mind-blowing as what I had found.”

It was around this time that Heather began her songwriting. Teenplicity just had to ask her the rising star if she remembered what her expectations were at the beginning.

“I think I expected that I knew what I was doing and what I wanted to say and that would be it, but I was so young,” she says. “I’ve always surprised myself by how much I let myself change as I grow up and am exposed to different things. What surrounds you changes what you have to say and how you want to say it, so that’s been a really cool line of surprises one after the other.”

The environment around her has definitely influenced her songwriting. Heather explains that at the start, she only had her own voice to draw from. “I fell into patterns and ways to write that I was comfortable with and liked.” Things have changed over the past few years as she dishes that collaborations have helped to expand her mindset and skills. 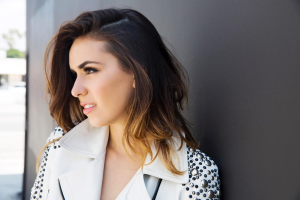 “In the past few years, I’ve worked with so many different people who have their own ways and own visions of what a song should be and it just gives me more to consider and different viewpoints to borrow, which is really valuable.” In summary, Heather states, “So I think the biggest way it has changed is that I’m way more open to attacking a song from different angles and that just plants so many more opportunities for experimenting.”

“I’m definitely now comfortable with being uncomfortable,” says Heather of how her writing has changed. “I’m down for rule breaking and for just writing without thinking. When I first started, I knew where I wanted to take the song, but now I mostly let the song take me, which is more fun anyway.”

The singer, whose voice sounds like a beautiful mix between Hailee Steinfeld and Alex G, topped with her flavor, calls the process of creating her EP a really great time. “Diamonds in the Dirt” boasts five unique songs, all of which showcase Heather’s multiple talents in music. It seamlessly transitions from pop notes to rap bridges, with an electronic beat carrying the song along.

“I got to work with a bunch of cool people around LA. I feel like each song is a bit of an anthem,” says Heather of her EP. “I felt empowered singing each song, which is the vibe I was going for. I bopped around different neighborhoods, everywhere from Glendale to Culver City and had fun with it. I also left space between writing each song, so each felt like it had a life of its own.”

However, not every song came easy. For the young adult, the last song on the EP ‘Take It Off’ was the most difficult to complete. “We had so many melodies and funny lyric ideas that I probably shouldn’t repeat,” she teases. “At one point, we had a huge collection of ideas that we had to map out, so getting it to that organized part where it made sense took some focus, but it was exciting from start to finish.”

As for which is her favorite, Heather easily picks out ‘Diamonds in the Dirt’, the title song of the EP.

“There is something hopeful about the sentiment of finding something beautiful among a complete mess. I also think it’s the most personal which makes it special for me.”

Teenplicity asked Heather what she learned about herself during the process of creating her EP, to which she says, “I liked having songs that were up and fun, but as I wrote ‘Diamonds in the Dirt’, I realized how impactful and important something vulnerable can be. It’s a great jumping off point and stepping stone to where I’m going to take it next.”

Heather isn’t limiting herself to just singing in the future. Thinking two years into the future, Heather exclaims, “I’m going to NYC!” The move is to take place soon and the singer goes on to dream of the possibilities of the city. “I’d love to be playing in the city (and hopefully other places in the world)!” Her writing skills she has developed over the years through music will also come in handy, as she hopes to be writing a novel in the near future too.

Yet, if you asked Heather what a major goal for her career is, she keeps it simple.

“I would really love to play in the venues in which I saw people who I totally idolized. I saw Adele and Regina Spektor at the Beacon Theater and to be able to stand where they stood would be insanely surreal.”

That journey begins at her first show in LA on September 24th, which Heather couldn’t help but be excited about. Afterwards, the talented singer will be moving to New York City and, according to her, taking on a whole new city to write about. (Heather reveals that the writing is already in the works.)

“Thank you for trusting as I explore what I need to say,” Heather says to her fans, “and thank you always for listening. So, so much love.”

You can pick up Heather’s EP “Diamonds in the Dirt” here! And be sure to follow her on Twitter!

Disney Channel’s newest show Andi Mack has yet to officially air but has already garnered support and praise from critics and viewers alike. With the single-camera dramedy…