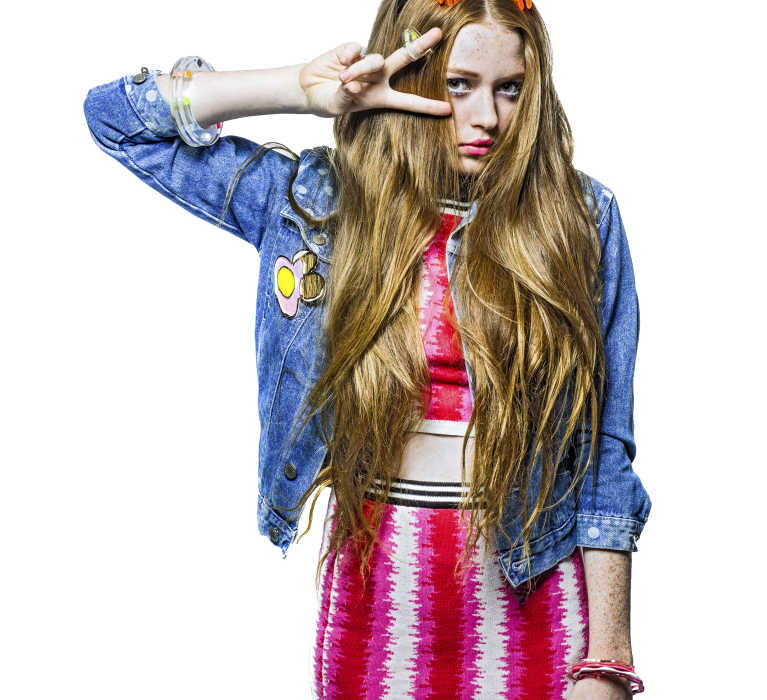 At the mere age of three, young Larsen Thompson’s destiny was set into motion. It was then that her parents placed her in dance classes simply for fun, not realizing the heart, time, and dedication she would later give. Larsen remembers her love for dressing up in costumes and performing.

Her journey through dance has been a long one, despite her young age of only 15 years old. The list of Larsen’s accomplishments is long, including millions of YouTube hits, performing on major award shows and television series, as well as a number of national print and on-camera commercials.

But thinking back to the very beginning, Larsen remembers the pure joy she felt. She recalls, “It was a blast. I remember always having a smile on my face at dance class and I connected to the movement from the very beginning.”

Fans on Twitter like @ayeits_zizi were curious as to who inspired during her early start. Larsen cites her aunt Julianne McNamara for inspiring her early on in life with both dance and gymnastics. “She was on the 1984 Olympic team receiving a gold medal in the bars,” Larsen reveals. “She had passion for the sport which I related to in dance early on.”

Building her career in the field of dance has led her to connect with fellow young dancer Taylor Hatala. Since meeting, the two have created a series of dance videos, choreographed by Janelle Ginestra. “The ‘Fraternal Twins’ is what Taylor and I are nicknamed within the dance industry for our videos we dance in together,” Larsen says.

Of the name, Larsen explains, “Our choreographer Janelle came up with it and it has stuck ever since. She thought we looked like sisters and had similar dance styles that complimented each other. We are great friends and part of our family!”

The duo started dancing together the previous year for fun at “The Pulse” convention in Las Vegas. “We had so much fun we decided to do a concept video after that and the rest is history,” says Larsen.

“Dancing with Taylor is very natural and we are so synchronized which is very unique and special,” she comments on their great chemistry. But there is a difference between dancing with a partner versus dancing alone. “I think dancing solos allow you to express yourself in a different way.” Larsen is firm that she loves to do both.

Considering the foundation that Larsen has built for herself through dance, she hopes that it will help her to move forward in other aspects.

“To me, dance is a platform for other things like modeling, acting, and singing. It has provided confidence in myself and I am becoming a stronger performer/entertainer.”

Dancing has already led to her extremely successful start in the modeling and fashion industry. Larsen has been featured in commercials for big stores like Target, done numerous campaigns nationwide and internationally, and attended big events like New York Fashion Week shows in 2014.

“I started doing commercials when I was younger and casting agents would always ask me if I modeled. So that is when I decided to sign with an agent and take it more seriously,” Larsen says of how she transitioned into modeling alongside her dancing.

“My first modeling gig occurred after doing a national commercial for Target, the producer asked if I would be interested in doing print work on the same campaign.” Larsen says of her first modeling job, “I was so honored and excited, plus the set was super cool!”

Considering the large number of campaigns that Larsen has modeled in, each one gets bigger and better than the next. One of her biggest campaigns is one she is most proud of, which actually happened very recently. “The campaign I am most proud of just happened in January 2016 where I was feature on the cover of Neo2, a high fashion magazine out of Madrid, Spain!” she reveals.

However, nerves aren’t her biggest worry anymore. She seems to have left that in the past with a campaign she did for a famous fast food chain. “I was most nervous about doing my first commercial for McDonalds because it was a major production and I was really young and not really aware of what was going on.”

Being a dancer and a model allows Larsen an insider glance as what happens in the fashion world. It’s something she can use to her advantage, especially with modeling, as she wants to move forward in the fashion industry. “I would love to be involved with fashion design when I get older,” Larsen says. But for now, she enjoys modeling for high fashion lines.

When she finds time in her ultra busy schedule, Larsen is often on YouTube, posting about her adventures in fashion week, a new dance with her ‘fraternal twin’ Taylor, or giving some fashion advice. “I do a lot of DIY videos, but most of my videos are of me dancing when I drop into North Hollywood for class or when Taylor and I get together doing fun challenges or Fraternal Twins videos,” she says of her channel. “I try to add videos on a monthly basis to keep it current.”

Videos on a monthly basis is a much easier way to keep her channel current due to the fact she has an extremely busy schedule, releasing her from the stress that more videos on a daily basis would add to her already mounting pile.

“The schedule and commitment is hard when I’m trying to balance high school, work, and hanging with friends and family,” she says of the difficulties she faces. “My parents keep me grounded so I feel like I do a pretty good job of juggling it all.”

Considering so much of herself has been broadcast in one way or another, whether at dance competitions, in a fashion spread, or on YouTube, there are some things Larsen wishes she could tell her younger self, which is great advice for everyone as well. “Be confident in yourself, don’t listen to what others say or think about you, train hard, and love what you do! Everything will fall into place if it is meant to be.”

It is great advice to keep in mind even during her day-to-day life considering how hard the dance industry can be. Larsen says, “The dance industry is very competitive but I don’t let that shake me. I focus on being the best me, train hard, and work with talented mentors that will further develop me and my career.”

With that in her head, Larsen has high hopes for what the future will bring her. “I would love to be in a feature film or a regular in a television show,” she confesses of where she’d like to see herself in two years. “In modeling, I would love to do runway work in Paris, Madrid, London, and New York.”

Larsen also hopes to continue to grow on the great fanbase she already has cultivated. It is there support that helps her on her journey.

“I love you all and thank you for supporting and inspiring me,” Larsen says to her fans. “I hope that you all believe in yourself and accomplish your goals that you set for yourself. Thanks always for tuning in and supporting me!”