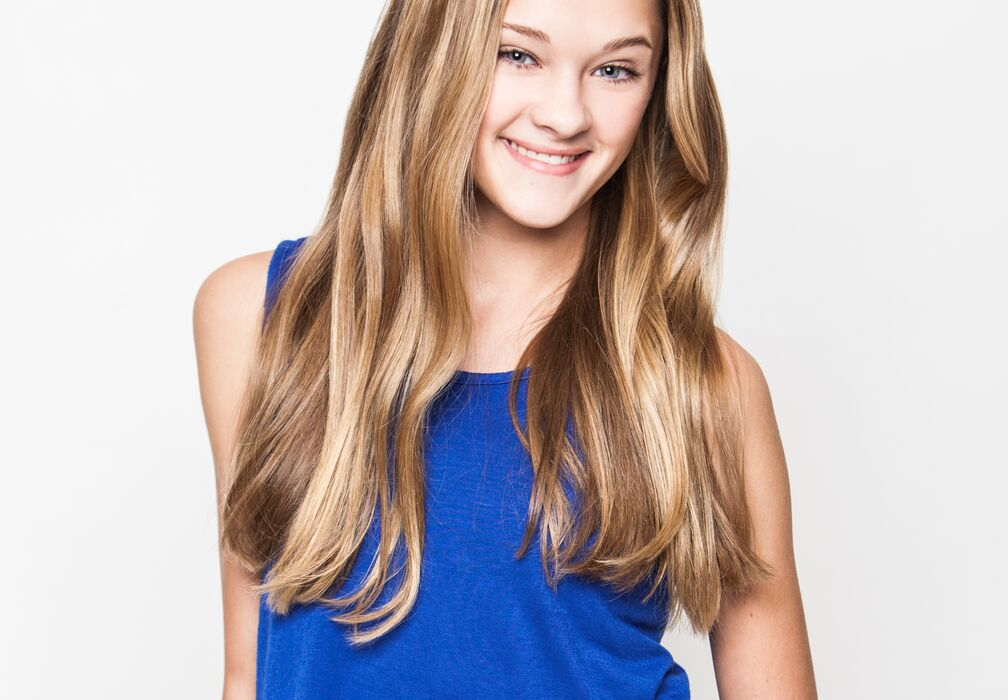 Being a twin is not easy. Being a triplet is definitely harder. But being a quadruplet, and the only girl for that matter? That presents itself with some difficult challenges.

Lizzy Greene plays Dawn Harper, the only girl amongst her siblings, and one fourth of the quadruplets on Nickelodeon’s sitcom Nicky, Ricky, Dicky, & Dawn. Though the siblings have next to nothing in common with each other, their care and love for each other is what helps them to power through whatever situations they find themselves in.

The Texas native had never imagined of being the sole female lead on a popular Nickelodeon show though.

“It’s really incredible because I never thought that I would be where I am today,” Lizzy says about living out the dream most kids have. “I always thought I’d be just a kid in sixth grade, just doing gymnastics and playing with friends after school.” She says that even with joining a local theatre group she never thought this would be the outcome.

Lizzy acknowledges that growing up, she never shied away from the spotlight when given the chance. “I have always been that kid who has always loved to perform in front of people; I’ve always been the first to perform at the talent show. I’d always be the first one to want to read my story that I wrote to the class because I love to make people laugh and I just love performing.” So when she joined her local theatre group, it was everything she ever wanted and it felt like she was meant to be a performer, according to Lizzy.

Staying with her theatre group for about four years, it was during a production of one of their plays when Lizzy was discovered. She was the lead in the show, and she says she was lucky enough that an agent actually came and saw the performance. After asking if she wanted to work with [the agent], Lizzy recalls enthusiastically that she said yes. “It was an experience that I definitely didn’t want to pass up on. And so I absolutely said yes!” she exclaims.

One of the auditions that her agent was able to get her was for Nicky, Ricky, Dicky & Dawn. Lizzy remembers flying out to California and auditioning for the show, and the rest is history.

“It’s a truly incredible experience because I get to meet all of these incredible people and do all of these incredible things,” says Lizzy, the awe and gratefulness so evident in her voice. She even spilled that herself and the entire cast will be traveling to a “really cool place” within the next few months, though she couldn’t say where. “But I’m very excited.”

Happy to be on Nickelodeon and to be on such a great show, Lizzy says that they still maintain a professional work environment, and that they all work like adults. Still, she couldn’t express enough how thankful she is for this opportunity. “It’s just a really, really incredible experience.”

With season two having concluded in March, fans are eager to see what is in store next for their favorite quadruplets. Only recently did the cast start filming season three of the show, and the excitement to be back is bigger than ever.

“It’s really awesome [to be reunited] because we spent so much time away because we’ve been done ever since Thanksgiving and haven’t seen each other in so long,” Lizzy says of being back on set with the cast. “When we all come back, everybody’s much taller, and everybody’s voice is deeper, and everybody’s just grown up a ton. We’ve all really missed each other because we’re all really good friends with each other and it’s just awesome to see everybody again, especially our crew because they work so hard. It was just this big family reunion and it was really nice to see all of them again.”

Lizzy says that once they saw each other again, they were definitely ready to get started on season three and she joked, “And make more magic, as they say.”

Looking back at where Dawn was in the very first episode to where she is now, Lizzy says that her character has grown up in more ways than one. 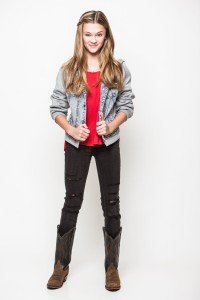 “She’s definitely much taller,” she says with a small laugh. “Just grown in maturity and kind of grown up. She’s not much of a tomboy anymore, she’s getting her inner girl side out.” She admits that the boys have grown up as well. “All the quads have become more mature because we started at the age of ten and in the script, now they’re twelve and [they’ve] grown in two years. We’ve all changed our wardrobe style,” she continues, “now it’s more grown up clothes. Everybody’s grown up with age a lot.”

One more major change, at least for the actors, is a different hairstyle.

“We just filmed a new intro for the show and they’ve also cut all of our hair and we all have really, really short hair now!” she manages to say through her giggles. She admits that it was a bit nerve-wrecking. “They cut probably about six inches off of mine because mine was really long, and man! They cut so much off of the boys! Like, it’s crazy how much they cut everybody’s hair!” Lizzy says that the haircut helps to grown them up “a ton”.

Although Lizzy couldn’t spill on what was happening in season three, she did relay what she hopes will happen one day. “I would love to do a gymnastics show about how Dawn and the quads go to gymnastics,” she expresses. “I’ve always loved gymnastics, that’s always something I’ve been doing on and off my entire life, just because I love to flip around. I’ve always loved moving around, it’s just because I like to be a very active person. I’d love to see that happen.”

Lizzy would also love to have more celebrity guest stars on the show, namely Gaby Douglas. “She’s an incredible gymnast!” Lizzy gushed. In addition, she’d love to see Cara Delevingne, Jennifer Lawrence, and Zendaya on the show, just to name a few. “It would be incredible if they all [guest starred]. I look up to all of them because they’re all very nice and professional and I’ve heard many, many good things about them.”

“Everybody they put on our show is incredibly nice and sweet,” she says of previous guest stars. “Our writers are so incredibly amazing. I have no idea what’s coming up but I know that they’ll always make it incredibly funny.”

Having been on the show for almost three years now, Lizzy says the idea of being humble is one that she definitely gained from being on the show. She ties it in with being grateful for the entire experience.

“All of this is served on a silver platter; you really have to humble yourself and keep yourself grounded because all of the stuff they give you is a once in a lifetime experience.” In addition, Lizzy says she gained a great work ethic that she can take with her wherever she goes. “You don’t see a lot of twelve year olds working nine hours a day, so I’ve gained more understanding for the acting industry and what it takes to make a show. Like I said, I had no idea I would be doing this, because I always thought I’d be that kid that had playdates after school, but it’s incredible that I’m right here, where I am now. So it’s definitely staying humble, working hard, and just pursuing your dreams.”

Lizzy shares the same sentiment with her fans, who she also thanks for their support and for sticking with her. “They are what makes the show the show! If it wasn’t for them, we wouldn’t even be on the air. [I would] thank them so much because they’re just incredible people for following and continuing to help out our show.” She says she would also always encourage them to follow their dreams, saying, “If you work hard and pursue your dreams, they will come true.”

She says of her first ever nomination, “I absolutely, positively, never thought I’d be here and that was like one of my dreams. To be on Nickelodeon was a huge dream come true for me and the second I found out [about the KCA nomination], I jumped up and down and did a few back-handsprings because I was so excited!” Although some months have passed since the awards show, the awe in her voice when she speaks of being nominated has not dimmed at all. Anyone that could hear her would know how happy and grateful she was to be considered, still just taking it all in and enjoying it while she can.

“It’s truly incredible. And like I said, I never thought – there’s so many more hard working and awesome actors that they could’ve chosen and the fact that they chose me, I thought that was so incredibly nice of them because I am so young and I’m not as experienced as some of the other actors. It’s still super sweet that they chose me and the fact of being nominated is just so incredible. And it was really a dream come true.”

While Teenplicity is definitely cheering her on and hoping for a lot more nominations (and wins soon!), Lizzy hopes to expand her horizons in the future.

“Well, I would love to continue in the acting industry,” she says of what life will be like in a few years after Nicky, Ricky, Dicky & Dawn. “I would love to do more movies, and dramas maybe, but definitely comedies because I love comedy. I definitely want to pursue the acting industry and continue learning more about the craft and getting better at it. Hopefully even getting more roles!” she says, the hopeful smile clear in her voice. “It’s just a truly, incredible job to have because there’s so much that goes into it that most people don’t even know. Like when you see something, [or] when you think of Hollywood, you think everybody always comes in and they always look perfect but the thing is, most people don’t know what it takes to actually make someone look really good on camera. Like the makeup, the hair, the lights, all of that stuff.”

Lizzy reiterates that performing is something she loves to do, and has her entire life, so she definitely wants to keep pursuing it and getting better at it. Her fans and Teenplicity cannot wait to see what else she has up her sleeve in the future. 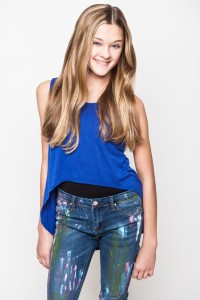 *Above photo credit to Vince Trupsin

The ‘Magic’ of Aubrey Miller & Her New Single

Star of Amazon’s “Just Add Magic”, Aubrey Miller teases season three, her music, and her relationship with her fans.