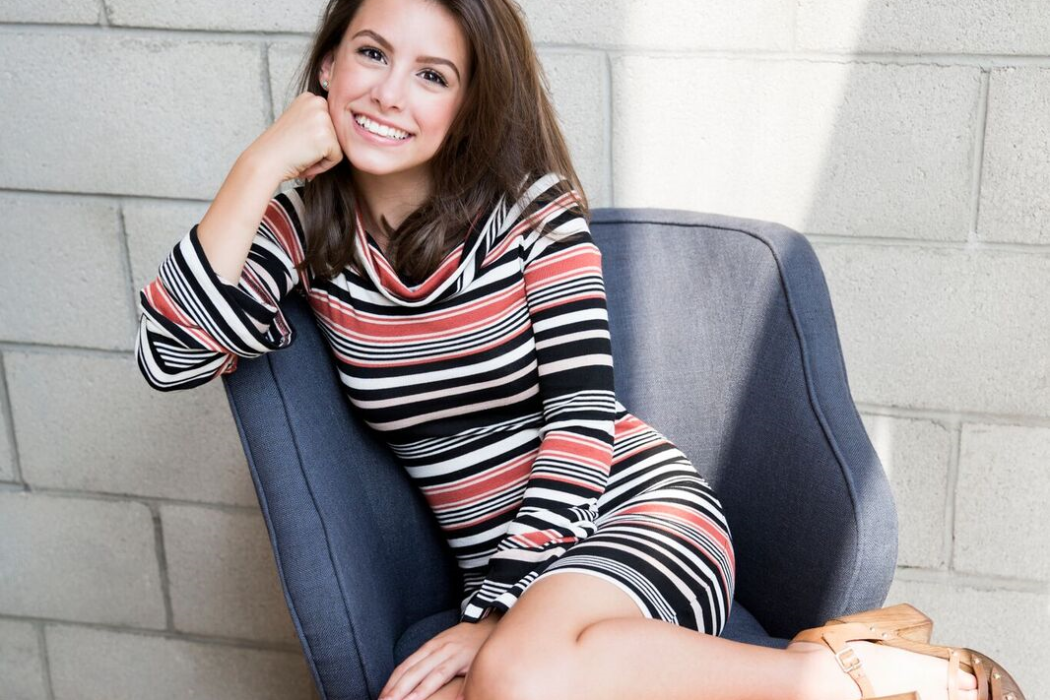 For Madisyn Shipman, becoming a lead on Nickelodeon’s “Game Shakers” is far from one of her first successes in the entertainment industry. With a resume that spans genres and venues, the Dan Schneider series is, however, the first time fans get to see Madisyn holding a main role in television.

Madisyn plays ‘Kenzie Bell’ in the series, a tech genius with a passion for coding. The North Carolina native calls her character a smart girl. “[Kenzie’s] the brains behind the operation,” Madisyn says. “I personally feel that Kenzie and I are pretty similar. She’s a little bit of a nerd but hey so am I!” She encourages everyone to embrace your inner-dork side!

The excitement to embrace her “inner-dork side” actually traces back to when Madisyn originally auditioned for the show. At first, she attributes the excitement towards the show as her auditioning for the “legendary” Dan Schneider.

“I mean, I grew up watching all of his shows,” she explains as she lists Dan’s hit Nickelodeon shows like “iCarly”, “Drake & Josh”, and “Victorious”. Madisyn goes on to say, “It had always been a dream of mine to be on Nickelodeon. Once I started reading the script and putting Kenzie to life, I realized that I identified with Kenzie on so many levels.”

Kenzie resonates with so many fans as well. And fans of “Game Shakers” cannot wait for new episodes to come, which are due this month.

Madisyn reveals that the cast is working hard on filming episodes for fans. She dishes, “Expect some fun, new adventures and some cool, new guest stars!”

“I’m so excited for all of our fans to see how the show and our characters have evolved,” the actress says of the upcoming new episodes. “In the show, this year we are all in 8th grade, so we will see if there’s any boy drama like in real life. I mean, I don’t have any boy drama in real life but it’s kind of what happens in middle school. Also, I would love to see the writers incorporate some type of singing/guitar for Kenzie but so far, nothing like that has been mentioned.”

For Madisyn’s character Kenzie and her best friend Babe [Cree Cicchino], they’ve used their skills to create even more games and apps. Yet, the one that is closest to Madisyn’s heart is the first.

“Sky Whale is definitely my personal fav,” she gushes. She also mentions that anything involving donuts? – She’s hooked.

But for fans who are curious as to what Madisyn’s own personal gaming app would be like, she says, “I would create a game geared toward girl empowerment. It’s important for us girls to stick together and realize that we can do anything we put our minds too!”

Outside of “Game Shakers”, Madisyn teams up with one of her favorite musicians in the film Geezer.

“Geezer is about the struggle that Perry [Billie Joe Armstrong], a former punk rocker, encounters. His band has been on a ten-year hiatus and he is kind of experiencing a mid-life crisis. He believes his wife [Selma Blair] and his daughter,” Madisyn explains of the film, adding a “Moi!” after daughter. “Forgot his birthday. He decides to throw himself a pity part at a fancy NYC hotel and bumps into an old crush while there. I don’t want to spoil everything for you guys though,” teases the starlet with a wink.

In the film, Madisyn portrays Salome, who she describes as just a normal girl “who loves playing her guitar and is family oriented.”

Geezer comes out this fall and the budding musician urges her fans to play to see it. “And you may even see me singing and playing guitar in the movie!” Madisyn teases again.

Working on the film was like another dream come true for Madisyn as she starred opposite her musical idol.

“Getting to know Billie as a person while working with him was such a great experience. Lee Kirk, our director on Geezer, actually set up some bonding time prior to the start of production for Billie, Selma, and myself. We went bowling and hung out for the afternoon.” Of her idol, she says, “Billie has such a fun, loving spirit. He has kids, so he gets it. He’s one pretty awesome human!”

One look at the list of Madisyn’s costars and it’s easy to tell that there’s a lot of knowledge to go around.

“We currently are on set about nine months out of the year filming ‘Game Shakers’. As you all know, we have the pleasure of working with the one and only, amazing Kel Mitchell,” she says. “He has taught me so much on set from setting an example as a great role to certain acting techniques he has found helpful in his own career.”

The young actress has learned about herself as well.

“The one thing that I have learned over the last year is that you really have to stay true to who you are. You have to live your life in alignment with your core values.”

It might be due to her humbleness that it hasn’t sunk in yet for Madisyn that she’s on a widely popular Nickelodeon show. She says that it often feels like the entire experience is surreal. “Someone pinch me, please!!” she jokes.

Madisyn still deeply appreciates the fans that support herself and the show so much. Her advice to her fans is to always be true to yourself. “Never change just so people will like you,” she says. “Your true friends will love you just the way you are!”

Keep an eye out for all new episodes of “Game Shakers” coming to Nickelodeon this month! To stay up-to-date with all that Madisyn is up to, make sure to follow her Twitter and Instagram.

*ABOVE PHOTO CREDIT TO BRETT ERICKSON

When listening to ‘Every Little Thing’, it’s no surprise that Scott Borchetta, the driving power behind Big Machine Label Group and man who discovered…