Magic is in the air…Or maybe not so much, at least for the young witch “Ruby” played by actress Kennedy Slocum on the new Nickelodeon show, “WITs Academy.” The series is a spinoff of Nickelodeon’s popular telenovela-formatted “Every Witch Way” (EWW) and brings over some of its key characters, like human Andi, and its magical elements.

“‘WITs Academy’ is about Andi, Emma’s (“Every Witch Way”) best friend, attending a school in the magic realm to become the first ever human guardian. However, in order to graduate, she, along with the other wannabe guardians, have to take care of two W.I.T.s (witch/wizard in training) each,” Kennedy says as she describes the show. “Andi has to adjust to this, while also trying to avoid Ruby’s death stare. Andi’s confidence and strength is tested in many ways with the relationships she makes and challenges she faces throughout the season.”

Fans of the predecessor will definitely enjoy the new show. It’ll have elements of the original, while not forgetting the foundation “WITs Academy” is built on, and will also be able to stand alone.

“There is a root connection between the two shows for sure,” comments Kennedy, “and there are plenty of Easter egg references that EWW fans will love, but WITs Academy is very new and different. Fans should expect to see a lot of new and exciting changes in the characters, not to mention all of the magic!” 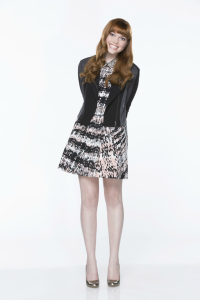 Kennedy Slocum is a sweet and thoughtful person, which makes it interesting to see her playing a character that’s definitely not like her. Her character, Ruby, is manipulative and determined, wanting to prove herself despite being the first witch in her family without her powers. Kennedy says, “Ruby is a girl who has perfected the craft of ruthless manipulation. She’s really good at getting people to do what she wants without having to do anything in return. Ruby has had to master these alternative ways to achieve her goals because she is the only witch in her entire family without powers.” To say that Ruby is overjoyed when Andi comes to WITs Academy is a great overstatement. “When Andi, a human, shows up at the academy, Ruby has an instant problem with the potential threat to her system she’s been happy controlling at the academy.”

Being a witch or a wizard means having a multitude of powers and abilities, right? Not so much for Ruby. Being the first witch in her family without her powers really drives a lot of her actions while at WITs Academy. “All the guardians at WITs Academy are witches/wizards without powers, but Ruby refuses to accept that she is a part of that group,” Kennedy tells Teenplicity. “In her mind, having magical powers makes you more of a person, so she feels inadequate without them. She has that insecurity hanging over her constantly, so, in a way, being the best in the academy is a way of proving herself.”

It’s definitely an interesting experience for Kennedy to play a character like Ruby. “It has been really challenging to portray someone who hasn’t accepted who she is.”

Despite her insecurities, Ruby will not go without a fight and is determined to work harder and better than anyone else. “Although Ruby has that insecurity, she is still a very strong individual,” says Kennedy. “She definitely finds ways to get around having no magic to get on top (and to mess with Andi in the process). She’s incredibly resourceful. Although she doesn’t love having to take care of two kids, she is going to do everything she can to make sure she’s the best.” As to if Ruby will ever have magical powers is yet to be seen…

WITs Academy has quite a bit to offer its audience and interest them. Kennedy is no exception that she got most interested in the core of the show. “The magic!” she exclaims. “So many things happen in the show that I never thought would be possible, but the writing is so creative. All the characters encounter some serious magical obstacles throughout the season that will surprise fans, for sure.”

It’s very obvious, through each cast member’s various social media accounts, how close the cast has become with one another. Through tweets and photos, fans are able to see that the friendships on screen transcend to real life. 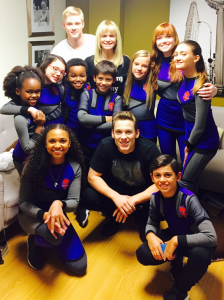 “One of my best friends on set has been Meg (“Emily”), so whenever we had a scene together, something ridiculously silly would happen behind the scenes. One of the most common habits we had was impersonating MirandaSings, the YouTuber,” Kennedy says as she begins to describe some of her favorite moments on set. “She has quite the…unique… voice,” she jokes. “So once we started talking like her, we couldn’t stop. Timothy (“Ethan”) would be reluctant at first, but would eventually join in and soon we’d be putting on entire skits on set! We would all laugh about it, but I think we might have been hurting the crew’s ears after a while…”

Speaking of being on set… a typical day for Kennedy seems very packed and maybe even a little overwhelming. “A typical day on set would consist of LOTS of coffee in the morning, and then I would grab my scripts and go over lines while in hair and makeup. (Ruby’s hair takes some serious time and determination from the wonderful makeup and hair crew, so I bring other things to do.)” Kennedy shares, “On a normal day, I would need to have about seven scenes memorized to shoot. There is so much involved when I’m actually filming, so I always like to make sure I’m prepared before I step in front of the cameras.”

The hard work and preparation are clearly paying off, as the show has already come out to look wonderful and has fans excited for what will come next! Kennedy is also very excited for the fans to see “the dynamics between the characters.” She says, “I think the concept of a bunch of teenagers having to take care of younger kids in itself leaves room for many hilarious occurrences, but with magic thrown in, a lot of crazy things can happen!”

Outside of “WITs Academy,” Kennedy has shown her talents in music. Having grown up with music because of her parents, she made her own YouTube channel, complete with song covers, a little while back. “Ahhhhh, the YouTube covers…” she says, trailing off in laughter. “I’ve always been surrounded by music because of my family. Music is my first love. I’ve been singing longer than I’ve been acting. Now that I have some time off from shooting season 1 of “WITs,” I will definitely be working on my music. There are a few songs in the works that I’ll be recording in the studio, and I’m hoping to release some covers on my YouTube channel as well. Being away from my piano for three months gave me intense separation anxiety.” 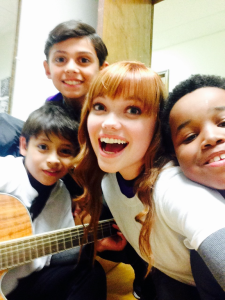 If music was her first love, then how exactly did she get into acting? Well, funnily enough, a musical.

“When I was six years old, my family went to see “Annie” at the Pantages Theatre,” Kennedy begins. “About five minutes in, Annie started singing the song “Maybe,” and I was in awe. In the middle of her song, I tapped my mom’s shoulder and whispered, ‘How much money do you have to pay to do that?’ She replied, ‘No, you don’t pay to do that. They pay you.’ Without hesitation, I looked at her and said, ‘I want to do that.’ A few months later, I was cast in my first musical.”

The stage still holds a special place in her heart to this day. When asked to pick between stage, television, and film, she chose the first. “I think television and film are new and exciting for me, but stage is where I discovered my love for acting, so stage would be my favorite medium to act in.” Explaining further, Kennedy says, “There’s something so personal about feeling the energy of a live audience completely immersed in a reality that you’ve led them to believe. It’s so raw. Nothing can replace the kind of energy you get from a live audience.”

Since a young age, so many people just want to be independent and do things on their own. It’s natural, and a trait that nearly everyone gains once learning how to walk and talk is accomplished. But Kennedy is learning that it is okay to rely on others for some things, which used to one of the biggest obstacles she’s faced. “The biggest obstacle I’ve faced is finding a way to be okay with depending on people. I am a very independent person, so if I can take care of something myself, I will. But sometimes, I shouldn’t have to only rely on myself,” she states. “I’ve had to realize that the people I love in my life are there to help me, so I don’t have to go through it all alone. God, family, and friends are extremely important in my life, so I’m learning to accept that I don’t have to do everything on my own.”

With everything that has been going on in Kennedy’s life over the past year, she can definitely say that she’s learned a bit about herself. “I’ve always been a girl who loves to travel and doesn’t mind exploring and trying new things, but with being away for so long with “WITs Academy,” I’ve learned that I love having a home to come back to. No matter how many changes I’ve gone through this past year, I love walking downstairs in the morning to grab coffee and hearing my dog’s tiny feet bound down the stairs because she knows I’m awake. There’s such a comfort in being home.”

Now that Kennedy has some time off from “WITs Academy,” her focus is mainly going to be on her music. “When I’m not working on songs in the studio, I’ll most likely be baking macaroons or cupcakes or something! Baking is one of my favorite things in the world.”

With one last farewell, Kennedy Slocum has this to say to her fans:

“Always pursue what you love. Everyone spends their lives working toward something, whether it’s a career, achievement, or person, so it might as well be something that you enjoy. For me, acting is what I love, so even when I have a difficult day of work, I still come home and think, ‘Oh! We’re doing this scene tomorrow? This is going to be good.’ If I wasn’t completely in love with the craft, I would be burned out. I love what I do, so when I’m working hard to improve every day, it’s completely worth it. I believe everyone deserves to feel that way about everything they work at in their lives.” 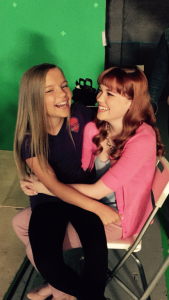