Disney Channel has a reputation for creating popular television shows focusing on female best friends. In the early thousands, there was Lizzie (Hilary Duff) and Miranda (Lalaine) on Lizzie McGuire, then there was Raven (Raven Symone) and Chelsea (Anneliese Van Der Pol) on That’s So Raven. The station moved on to the likes of Miley (Miley Cyrus) and Lily (Emily Osment) on Hannah Montana, Alex (Selena Gomez) and Harper (Jennifer Stone) on Wizards of Waverly Place, and Rocky (Zendaya) and Cece (Bella Thorne) on Shake It Up. Even more recent, the station currently has Riley (Rowan Blanchard) and Maya (Sabrina Carpenter) on Girl Meets World, KC (Zendaya) and Marisa (Veronica Dunne) on KC Undercover, and now Shelby (Lauren Taylor) and Cyd (Landry Bender) on their newest show Best Friends Whenever. 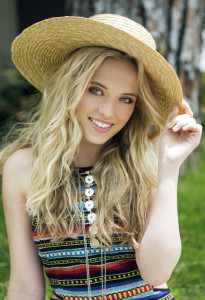 In Best Friends Whenever, the main characters Shelby and Cyd are given the ability to time travel after a scientific mishap in their friends lab. From the writers of Disney XD favorite Randy Cunningham: 9th Grade Ninja, the show is already expected to be in for a wild ride. For sixteen year old Lauren Taylor, however, getting the part of Shelby came with the help of working on the writers previous pilot, Fairest of the Mall, “the audition process was pretty simple, actually. Landry and I had worked together previously with similar characters and they really enjoyed our chemistry and brought us both in together to read for Shelby and Cyd.”

Along with Landry Bender, Gus Kamp also transferred over to the new cast from working on Fairest of the Mall, which, along with the help of the rest of the cast and crew, Lauren said made the set welcoming and open even as the show was beginning to grow into their own. The writers even allowed for her to contribute a personality trait of her own to her character, “well, funny story; I, personally, am a hugger. I love to hug people. The writers of our show observed this and made it a ‘thing.’ So now, Shelby and her family are huggers.” But, that’s not exactly Lauren’s favorite thing about her character, “my favorite thing about Shelby is that she’s so unselfish and just wants the best for everyone. I really admire that.”

“Shelby and Cyd are two very inspiring characters to me,” Lauren revealed, “Shelby will inspire young girls to believe in themselves and be kind to others and Cyd will inspire young girls to always stand up for themselves.” Being an advocate for anti-bullying, Lauren is very dedicated towards empowering others and teaching them to stand up, “I was bullied all throughout middle school,” she admitted. “I was called a nerd, a dork, a loser, I was told that no one liked me… It was a very bad time for me, but I found solace in music and acting.” With the help of her mother, Audrey Hepburn, Kimbra, Katherine Hepburn, and Leonardo Dicaprio, Lauren found herself inspired in what she described as “different, special ways.”

Along with her role as Harper Rich on the Netflix family comedy Richie Rich, Lauren’s covers and original songs can be found on her Youtube channel. Since Lauren has a performance at the House of Blues San Diego on August 4th, I wanted to learn what her favorite thing about performing is, “my favorite thing about performing is feeling the energy and giving it my all. The best feeling is when the crowd is doing the same thing.”

I think it’s important to do whatever makes you happy, if there is more than one way to make you happy, I say do it.

“I think it’s important to do what makes you happy,” she commented when asked about the typical reaction Disney stars get when they show interest in more than one field, “if there is more than one way to make you happy, I say you do it.” Even though Best Friends Whenever premieres tonight, Lauren and the cast have already felt welcomed to the network and the Disney Channel family, including from a special alum, “joining the Disney family has been such an incredible experience! Everyone is so welcoming and kind. In fact, the cast of Bunk’d, Gamer’s Guide, and Best Friends Whenever all went to Disneyland together the other day and we had surprise guest, Bridget Mendler, there to talk to us and give us advice for our upcoming journeys.”

Click here to check out some more pictures of Lauren Taylor from Sami Drasin!

Two seasons of Richie Rich are available for streaming on Netflix.

Hailing from a United States Marine Corps family, Havan Flores already has an idea of what a superhero is in real life, and how…