Made up of Annie Dingwall, a singer-songwriter hailing from the outside of Dallas, and Justin Klunk, a saxophonist/engineer from Torrance, California, RAINNE is an experimental alt-pop duo. Playing together for years, the two met at a Grammy Camp in LA becoming best friends as they both attended USC’s Thornton School of Music. Working solo for a bit, they came together to form RAINNE officially a couple of years ago.

“I fell in love with writing songs, and after that, I never wanted to do anything else,” Annie exclaims when I ask the duo what their individual catalysts were for choosing music as a career.

“It was always about the performance for me,” Justin responds. “I love the feeling of being on stage and performing for an audience. That feeling just became pretty addicting for me.”

Working as a duo, the two of them bring their own perspectives to the table when making music. “I love great songwriters, powerhouse singers, and dramatic music,” Annie explains how she influences their music and that it comes through in the music.

Justin, on the other hand, looks to instrumental artists, “I’m constantly listening to saxophonists and keyboard players for inspiration with how I approach adding the saxophone to our music in new and creative ways.” He gives a shoutout to Dave Koz, Michael Brecker, and Snarky Puppy and the work that they do along with The 1975 and Troye Sivan, “Sometimes, the spontaneous approach to music helps me find new sounds to add to RAINNE.”

To figure out this balance took time. “In all honesty, our basic roles in playing together have been the same since we started and have expanded over the years as we moved into different areas (like live shows to recording, etc.),” Annie shares. Justin acknowledges as well that having played music for years, the system formed over time in a way that couldn’t be concretely documented. “I’ve always been more concerned with the songwriting and overall concept and Justin’s more on the instrumentation and arrangement side – but we work together to create our vision. It helps that we are on the same page about most things, but when we aren’t, there’s always room to discuss and choose what is best for the song. We lean into each other’s strengths and lean on each other to strengthen our weaknesses.”

We lean into each other’s strengths and lean on each other to strengthen our weaknesses.

This teamwork also comes in the form of the producers that they work with. As Justin puts it, 90% of creating their sound comes from the vibe of the sessions. As Annie puts it, they collaborate with those who don’t put restrictions on their creativity.

“As artists, we want to work with producers that make the creative process fun and musically stimulating,” Justin exclaims. “To be honest, it’s almost like dating. You need to test the waters with each producer and see what we can create. Everyone we’ve worked with is so talented, but with Petie Pizarro and PLAYED, we’ve found a specific synergy that’s vibing well with us right now.”

Annie adds, “We draw inspiration from all different genres of music, so it’s fun to get to mess around with ideas with producers that share the same love of genre mixing/bending.” 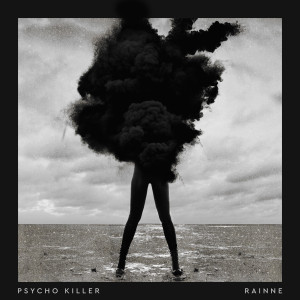 Their latest single as RAINNE is “Psycho Killer” based on their love of psychological thrillers and true crime. “The initial spark for ‘Psycho Killer’ was that super grungy bass and the first couple lines, ‘Maybe I’m a psychopath/flesh and bones in a body bag,’ and we just kind of took it from there,” Annie explains. “With such a bold lyric, we knew it would have to be an assumed ‘character’ song and that gave us a lot of freedom to get pretty crazy with the whole thing. I like to think that the character in ‘Psycho Killer’ has aspects of Amy Dunne in Gone Girl in it. I love that novel.”

“There was a distinct moment in the writing session when we decided to full-on commit to the crazy concept of ‘such a pretty psycho killer.’ It was fun getting to remove the restrictions of what we could and could not say since it was now a character. That’s really all it is — a character piece,” Annie continues.

As a takeaway for the song, Annie shares that though the song explores lust and obsession in romance, the goal wasn’t romanticizing the actions, “Obsession can be very dangerous in real life, and the characters this song is inspired from are not to be idolized, but as an actor, it is fun to assume a role for 3 minutes — especially when it is fiction.”

This is seen in their music video as well which premiered earlier this month. As Annie puts it, the video features moments of beauty and chaos.

“We like to tell a story in a song, but not always as a character. I draw a lot of inspiration from my friend’s lives, from stories, from strangers, from books, and from my own life,” Annie responds when I ask the two if listeners can expect more of their songs to carry a story in this way. “Sometimes the songs will be stories about them, sometimes about me — but the goal is to serve as a catalyst for the listener to be able to apply the song to his/her own life.”

“I think time is the key,” Justin chimes in about how they know when a song and/or is reaching out to them during the process. “We can feel one way listening back in the studio, but the true test is when you take a step away from the song for a couple of days. A couple of days later is it hitting you the way you were intending it to? Do the pauses and the silence create that suspense and emotion that it did the first time?” Justin asks. “It’s easy to get psyched about something in the moment, but time gives true perspective.”

It’s easy to get psyched about something in the moment, but time gives true perspective.

Since the beginning, Annie explains that in order to figure out how to write songs, she became obsessed with deconstructing songs to see what made them work. “I’d look at songs that were huge successes over the years and notice (for the most part) that my favorite songs were ones that told stories. Country music does an amazing job at visually telling a story and I’ve always tried to incorporate those kinds of lyrics into the songs I write,” she says.

Sharing the most surprising lyric or theme they’ve written thus far, Justin laughs and shares that “Maybe I’m a psychopath,” surprised him when Annie first introduced it. “Yeah, to be honest, this one caught me by surprise as well,” Annie agrees. “Scared me a little how easy the idea popped up in my head,” she quips.

“My favorite songs have always been sad/dark songs, which most people find is at odds with my personality,” Annie shares. “Both Justin and I are really goofy and happy people (especially together), and you can hear that in some of our other songs,” she gives a shoutout to their first single “Petty.”

“Yeah, if you ran into us on the street, we wouldn’t be the type you’d expect a song like ‘Psycho Killer’ to come from,” Justin agrees.

Residing in LA and surrounded by artists both in their own lives and just existing in the city, Justin shares that there’s a lot of things that keeps him personally creative, inspired, and in his own. One way is none other than coffee shops. “I love coffee. I mean, I REALLY love coffee,” Justin emphasizes. “I’ll go to random small coffee shops around town and just people watch, or maybe chat with the staff about anything. Also, finding new music that pulls me away from my comfort zone.”

With LA becoming their home base for music making currently while also being the place they first met, it makes sense that Justin and Annie as RAINNE could find footing and inspiration in the City of Angels setting. “I usually try to search for something that makes each experience into a positive one and try to relate it back to the music. Whether it be the writing or the playing. Because LA is such a busy place, there are always stories or instances to draw from,” Justin concludes.

“Psycho Killer” is available anywhere you listen to music.

Police brutality is not something new or recent, although often, it’s talked about as such. It did not begin with Sandra Bland even though…