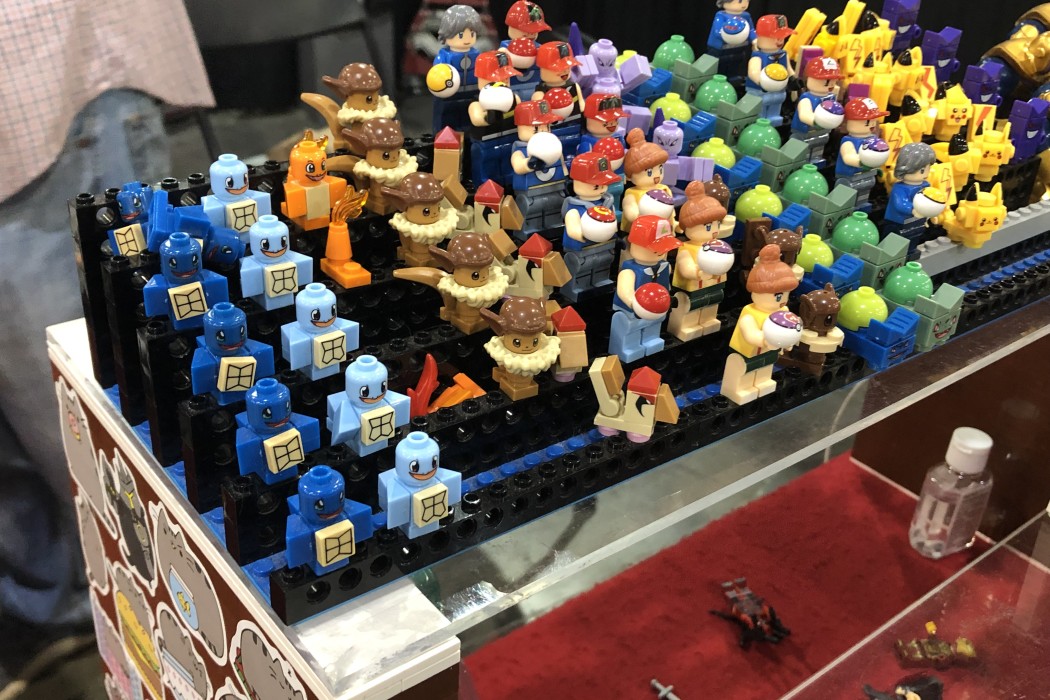 Walking into Wizard World Philadelphia, there is a sense of ease that’s not present with many other conventions.

The exhibition floor is smaller than most I’m used. However, quantity doesn’t always mean quality as this past weekend showcased. Though the overall convention was not as large as others, Wizard World delivered in the artists, vendors, and entertainers it brought to the stage – the last one quite literally.

The first thing that greets me as I enter is a stage. What it lacks in length, it makes up for with the passion being expressed on it. Saturday morning starts off with a band that eagerly gets blood pumping and the excitement building (Sunday had a balloon artist). The sound isn’t deafening, a nice change which meant I’m actually able to hear and understand the lyrics, and I’m happily surprised by the performance. Just behind the stage, straight down the middle of the con, lies the multiple celebrity autographing tables. To the right of these are the multiple vendors and artists that have acquired a table for the weekend while the left-hand side contains bigger plots full of corporate sponsored booths, free photo opportunities, a kids area, and multiple backdrop and prop setups. On the back wall opposite of the entrance is the celebrity photo op area. 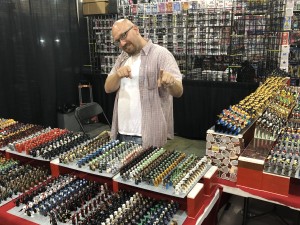 It doesn’t take much time to walk the convention floor. Even with it being Saturday – typically the busiest day for any convention weekend – there is enough room down each aisle to maneuver booth by booth. Vendors, like those selling Legos of your favorite sci-fi and fantasy characters, have a wide display of inventory to choose from. Many have deals like 5 for $20.

Other booths in the area are artists, as the Artist Alley section of the convention blends in quickly with the vendors before becoming its own entity. Each person brings their own unique spin to their merchandise, whether it’s body pillows of beloved Anime characters, unique Funko pops, or my personal favorite, the realistic drawings of Pokémon by Cody James by Cody.

Near Artist Alley is a secondary stage with rows of chairs in front of it. Sitting in front of everyone is usually a creator who is demonstrating, with the aid of a camera that gives an aerial view, different techniques for what they might be creating. Whether it’s stitching or sewing for cosplay outfits or something else entirely, the audience is able to see how it is being crafted and is able to hear instructions and advice. It’s a pretty cool setup that I don’t see very often at cons but is incredibly useful and informative. 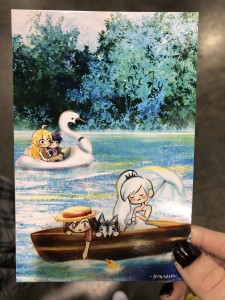 Another great thing is that you have the ability to actually talk to the other people nearby instead of rushing to say a quick hello before asking for a picture of their cosplay or saying that you love their artwork then running off. I got the chance to see an awesomely cool Twitter/Instagram artist – @AG_nonsuch – a couple times during the convention weekend! Having seen her a multiple cons beforehand, this was actually the first time we had the ability to talk for more than a quick second.

Overall what Wizard World was able to do was bring forth companies, independent merchants, and artists of all varieties that I haven’t experienced or seen at other conventions and give them a space to thrive. Even those that I have seen, like the Chocolate Moonshine Co. or skg retrogaming, were able to spend more time with each person, explain their products, and give out samples or let people try them. I tried the system on display at the skg retrogaming booth which had thousands of retro games across multiple systems – their premium system even included classic arcade games! – all restored to look great and still perform well but now for an HD TV. 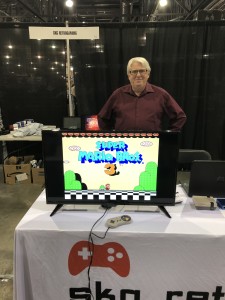 I was able to hold a good conversation with each person or booth I went to, not feeling rushed or looked past because there’s so many other people walking by. The relaxed environment with the con allowed myself to slow down and really appreciate what I was seeing and experiencing.

Seriously. I am usually running around, rushing to see all my favorite celebrities, attend different panels, and witness any special events going on that I do a quick run-through of the exhibition floor or barely spend any time on it. This often results in me basically never buying merchandise at a convention. Like ever. Low and behold, I actually did buy some (from two different people!!!) this past weekend. I got to take my time to look at everything and ask questions. Some booths do deliveries for orders through their website, all you have to do is ask. Others will prefer, whether because of the delicacy of the product, the price, or both, to keep their sales to strictly in-person at cons. So if something catches your eye and you’re unsure about buying it during the convention, ask if that booth has a business card and then if you can order it online. They’ll happily explain their way of doing business and help you with any questions you may have. 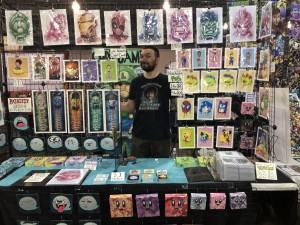 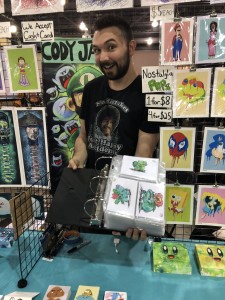 I also have to commend the fact that there wasn’t too much overlap in regards to panels that I wanted to sit for, which is good. Sometimes things will be scheduled for the same time and then you have to decide what you want to do more and it’s not always that easy. I was lucky that the panels I wanted to sit for ended up happening at different times with enough space between each slot for me to enjoy some of the floor again. I was able to watch the stars of Once Upon a Time recall hilarious moments on set and what it was like to film ‘Vadering’ scenes – one that is typically about someone choking and lifting another person – and enjoy as the RWBY cast teased each other and promote positive behaviors on social media in the midst of so much hate and bad vibes.

I even got to ask a question for the RWBY panel [“What have you gained or learned from your time on the show that has helped you move forward in your career or personally?] and got to hear some incredible answers from the cast, like Kara Eberle explaining how the success of the show and the fan response has helped her gain confidence in herself and her abilities.

The one slight downside to a smaller convention like this one is the smaller celebrity guest list. Unfortunately, things can change at any time and because of this, the guest list is never a guarantee, just an expectation. For example, Ben McKenzie and Morena Baccarin cancelled their weekend appearance on Wednesday, the day before the convention started, due to a scheduling conflict.

Still, the celebrity guest list was rather short though it did have some convention favorites like Lana Parrilla, Rebecca Mader, and Jared Gilmore of ABC’s Once Upon a Time, the cast of Rooster Teeth’s Anime-styled web series RWBY [Lindsay Jones, Kara Eberle, Arryn Zech, and Barbara Dunkelman], and Ian Somerhalder from The CW’s Vampire Diaries. It also brought out a rare sighting by Tony Danza [Taxi; Who’s the Boss?] and a first-time convention appearance by Ted Danson [The Good Place; Cheers]. 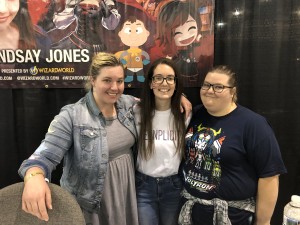 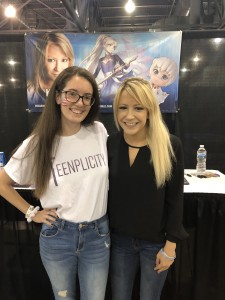 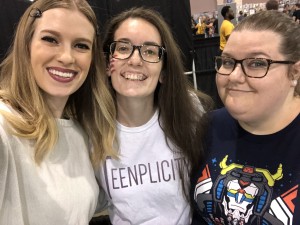 For the next Wizard World Philadelphia – already set for June 11-14, 2020 – figure out what you’re looking forward to most. If it’s looking for con and fandom essentials, immersing yourself into topics that you love surrounded by others who love it too, and appreciating different creations, then definitely come on down! If you’re more into grabbing autographs and awesome celebrity photos, you might want to wait until you find a celebrity that really grabs your interest first. You can help get a celebrity that you like by suggesting them to Wizard World!

Hope to see you next year!