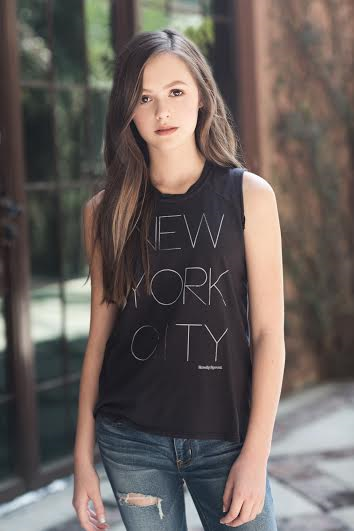 The newest show added to Amazon’s slate is Just Add Magic, a live action family series based off of books by bestselling author Cindy Callaghan. It follows preteen Kelly Quinn and her two best friends as they discover that a cookbook in her grandmother’s attic is extra special. Each recipe casts a spell but there is always a consequence. In the midst of resisting temptation to use the recipes for daily struggles, Kelly is on a mission to help save her grandmother from a mysterious illness by finding the right recipe in her cookbook.

Kelly Quinn is portrayed by Olivia Sanabia, a Southern California native with deep roots in acting. Olivia got her start in acting at an early age through singing and acting in musicals. It was during those shows that Olivia truly found her love of acting.

Taking on the new role of Kelly is something Olivia clearly takes pride and joy in. “[Kelly is] so kind-hearted. She does everything out of wanting to save her grandmother,” Olivia says of her character. “She’s really driven and kind, and she always wants to do what’s right. I really admire that about her.”

“I think my favorite

If she could create a recipe, Olivia picks a Healing Hot Fudge Sundae, similar to the Healing Hazelnut Tart that’s featured on the show. She says, “It’s just such an amazing recipe that I would make so many recipes like it – it would heal anybody and no matter what the price is, I think anybody would be willing to pay it to heal their loved ones.”

Just Add Magic is yet another homerun for Amazon, as it has become another series that the entire family can enjoy, which is one aspect that Olivia loves most.

“My favorite part is that it’s so family friendly and I love the idea that whole families can bond over it and watch it together. I know when my family and I find a show that we can all watch together, it’s so nice and kind of rare nowadays because there’s always something that maybe kids don’t like or it’s inappropriate for them, or the adults don’t like it. I really like that Just Add Magic is for all ages, from little two-year-olds to grandparents. I think that’s something unique and really exciting. I’m proud to be part of a show that a whole family can bond over and watch together.”

Bonding over Just Add Magic was a very common thing for families while the recent blizzard tackled the East Coast. Many fans, parents included, tweeted about their binge-watch session of the show with the rest of their family as the snow piled up outside.

“The fans are amazing and the support is so amazing. It’s really cool that parents are enjoying it as well and it makes me really happy that not just kids are enjoying it but older ages too,” says Olivia.

One thing that Olivia especially enjoys about Just Add Magic is that the entire season is binge-watch ready on a given date. “I think it’s so cool because it kind of allows people to create their own schedules,” Olivia says. “So if you have a fully day of not doing anything, then you can totally binge-watch it all and I love doing that because I have a busy schedule, so when I get a day that’s free, I love to just binge watch everything that I can. And I think, if you want to do a schedule and space it out because you don’t want it to end, you can do it by week. I think it really depends on the person and that person’s schedule and I think that’s really cool. It allows you to be creative with how you want to watch the show.”

While already able to binge-watch Just Add Magic on Amazon, fans will have to wait until later this year to see Olivia in her next role in the thriller movie “Day Six”.

Going from musicals, to a family series, to a thriller might leave an actor preferring one genre over another but Olivia cannot pick a favorite. Her love for all genres is endless and her preference depends on her mood. “Honestly, if I’m in a sadder mood, I’ll be like ‘Ugh, I love doing drama!’ And then some days when I’m in a happy, cheerful mood, I’ll be ‘Oh! Musicals and comedies!’ But at the end of the day, I love them all equally. They’re each so amazing and so different at the same time. I think that’s why it’s so hard to choose! I came from a musical background and that’s what got me into the acting business, it’s what got me started in acting, so I love it. I love drama, I have a huge passion for it, and I hope to continue working in it. And comedies are just amazing. I love making people laugh. I love all the genres.”

Not only is Olivia broadening her knowledge and toning her acting skills by working in different genres, but she’s also learning more about herself. She reveals, “This year I was working a lot. I worked nine hours a day, five days a week and I learned how that was and how that felt and I learned that I love it. I think it’s amazing and it’s an amazing experience. It’s teaching me responsibility at an early age and I learned that I really enjoy it.”

Her passion for acting is so evident in everything she does from her acting to how she describes it and how she connects to fans. She says, “I feel so blessed to be able to do what I do.”

When asked to say one thing to her fans, Olivia says this:

“Thank you all so much for your support. It really does mean a lot because a lot of the places we’re able to go with the show, and with everything, goes back to you guys and your support. I just really appreciate it all and we thank you from the bottom of our hearts sincerely. We want to tell you guys that if you want to pursue the acting business or anything else for that matter, to never give up. There’s going to be way more ‘No’s then there are ‘Yes’ and that’s something that’s pretty hard to deal with but if you keep pushing through it, and you love what you do and you work hard, then you will succeed.”