It is easy for one to get caught up in the presence of Priah Ferguson. The actress, who just turned 13 in the absolute coolest way possible, captivates audiences with her craft wherever she goes. Except for school, that is, where students see her as just another friend.

“Most of my friends and classmates know I’ve been acting for years,” she says about other students not getting fazed over her scene-stealing turn in the third season of Stranger Things. “At the beginning of the year, people came up to me and said congratulations, gave me hugs, stuff like that. I heard a few kids were saying, ‘Erica from Stranger Things goes to this school!’ but I didn’t hear it. I hang out at my locker, play clarinet, check my Chromebook to make sure my grades are on point.” While her star meter has steadily been on the rise since her first Stranger Things appearance, life hasn’t changed much for the young actress. “I just travel more for work,” she says.

“Being home gives me a little balance. It’s like… the best of both worlds.”

Though she is getting recognized more in public outside of class. Priah is overwhelmed by the love and support she receives. “All types of backgrounds and ages… a lot of young kids say I inspire them. It really warms my heart.”

Priah caught the acting bug at the age of six. Around that time, she started acting in local theater plays, camps, and workshops, according to the actress. For more than half her life, she’s found herself in front of a camera or an audience. When it comes to searching out her next role, the story is her main focus.

“It’s important that I am a part of honest, well-written stories,” she expresses. “Sci-fi, drama, period pieces, comedic… If the stories and/or roles are well-written – that attracts me to the project first.”

I really want to write and produce my own project.

As she continues to expand her career, Priah wants to be known for the passion, commitment, and dedication she puts forth in-front-of and behind the camera. “I want to be respected for doing good work, helping others, and using my position to create opportunities and businesses beyond film and TV. When people hear I am a part of a project, I want them to be naturally excited to see it: not just because I’m the girl in Stranger Things – that’s great too! – but I want people to know that I’m an honest storyteller.”

The draw of getting to show that side of herself is what excites her about certain projects, according to the talented star. She’s earnest as she expresses, “I hope the same can be said about the roles I play years from now.”

Given that she has a long career ahead of her, no doubt, it’s a good thing that she reveals to Teenplicity what she hopes to have accomplished in a year. “Hmm…” she thinks at first. “Over the next year, I’d like to accomplish being more patient,” she admits with a laugh.

Flash-forward five years and Priah has big plans for herself, ones that are easy to envision her completing given her devotion and enthusiasm for storytelling. “I really want to write and produce my own project,” she gushes. “I have some cool ideas of stories I haven’t seen done, so that is a big goal of mine and something I’m working on.”

Until audiences are able to enjoy Priah’s own creations, they’re still free to entertain her other works like her role as Erica Sinclair in Stranger Things. First appearing in season two and immediately garnering attention her for hilarious scenes, it was a great joy for all to see her role expanded upon in season three.

“After season two, I had no idea fans of the show would love Erica so much, so that was really cool,” the talented actress confesses. She also had no idea about her involvement going forward until the internet told her. “My mom came across an article that mentioned Erica would return with a group of friends in season three. I was like… ‘Whaaaat?’ We thought it was a rumor.”

In fact, so much of season three was kept under wraps on a need-to-know basis that Priah didn’t know what was in store for her. “When they officially offered me an opportunity to come back, I really didn’t know much about the plot. I sort of learned about it along the way.”

Describing Erica’s journey throughout season three, Priah calls it, “Unpredictable and kind of a fun treat!” Not only was her character given more screen time, but she was also given more depth. Erica isn’t just a witty younger sister with killer one-liners – though she did have a few this season that became meme-worthy across the internet – but she’s also incredibly smart (when she explained capitalism to the rest of Scoops Troop? Amazing.), constantly aware of what could be useful or used for her advantage, and unintimidated by brothers, adults, and authority figures.

Throughout season three, Priah’s character found herself with a new mashup of characters, old and new, affectionately called the Scoops Troop by season’s end. This gave her the ability to explore a more science-fiction, espionage side of the show. The group sneaks around a Russian underground base that was designed after the Death Star in Star Wars! Filming in the environment was a “cool” experience for the actress. “Really cool!” she continues. “It really sparked my interest to do more action films.” At least now she has the stunt background to help her in any pursual she does for that genre. 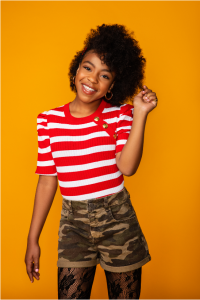 Citing it as the most memorable scene to shoot, Erica convinces the Scoops Troop to give her free ice cream for life if she helps them out by crawling through the ventilation system to open a secret, locked door. “I thought I would be nervous because the vent was tight, but I wasn’t,” the actress reveals. “I actually like tight spaces now.” The only downside? “All that gear definitely made me hot. I just remembered wanting to get it right so I [could] get comfortable again,” she confesses with a laugh.

One fan reached out wanting to know where Priah looked to for inspiration in terms of Erica. They brought up how other characters were based on typical ‘80s archetypes, for the most part in the beginning, that allowed the other actors to draw from, while they pointed out that there’s so few examples of ‘80s coming-of-age stories where a little sister, especially a young black girl, is able to shine. To this, Priah sends a sincere, “Thank you.”

“I’m just really happy the writers gave her so many layers and Erica has a chance to grow each season. I think old and new fans appreciated it too; it makes her interesting. I think some people assumed she would be this simple, funny one liner character… but Erica is more than that. She’s smart, witty, athletic; she looks out for her friends and just wants to be treated fairly. And she can dress!” exclaims Priah happily.

“Real life inspired me to portray Erica. Black girls aren’t great at just one thing – we’re more than sassy. We are great at many things, the 80’s just didn’t show that much. Erica was a little ahead of her time… I think that’s one reason she’s so funny.”

Strangers Things is available to stream now on Netflix!

When it comes to listening to artists like Ellie Goulding, Imogen Heap, and Colbie Caillat, usually you’re looking for an out-of-body experience of some…