Outside her door, Anna Grace Barlow is met with a pool and her giant donut float. After growing up in Mississippi, Alabama, and New York, chilling at the pool in her new home in California has become her dream summer forever. Being incredibly bubbly and friendly, I got to chat with Anna Grace last Friday afternoon to discuss her parts and Summer Forever and Scream Queen as well as gather a few words of wisdom about taking risks and following your dreams.

Summer Forever centers on the friendship of three girls; Sydney (Megan Nicole), Liv (Alyson Stoner), and Chloe (Anna Grace Barlow) as they prepare to go their separate ways while keeping their friendship after graduating high school. “I think it’s really rare that we have movies that are about girls sticking together and girls defending other girls. It [Summer Forever] teaches a really good lesson that friendships have ups and downs, but you gotta stick by your girlfriends. It’s really relevant and it’s really sweet and it’s really fun.” Besides the girl power element, Anna Grace also praised the music for why she loved the film and hoped other would like it too, saying that even though there’s a lot of “summer music” there’s music that can be listened to during any season as well.

In theme with the movie, the cast got to film a few scenes at the beach which included some pretty funny stories and experiences that Anna Grace couldn’t help recall without laughing. “I loved filming at the beach. We filmed at the beautiful Malibu beach and it was super cold in the morning but by the afternoon it was warm and perfect. I remember like a really funny story,” she started before bursting into laughter. “So it was like the first day that Ryan McCartan who plays our guy friend had to be shirtless, like in his swim trunks, and so he got to set that morning and was like, ‘Wow guys, I’m so white. Maybe I can use today to get a tan’ So he played football on the beach for so long that by the time he was like shooting his scene, he was so sunburned.” Anna Grace giggled before continued, “It was so funny. I got really badly sunburned too, I still have like faint lines.” 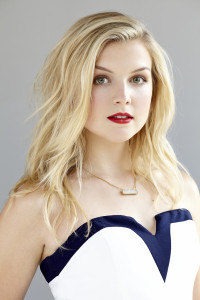 Anna Grace plays the incredibly smart, yet dorky and quirky, character Chloe whose goal before going to college to become a doctor is to throw a party.  “She’s sort of like the academic one, she has a good head on her shoulders,” Anna Grace said describing Chloe, “because it’s summer, she gets to let loose, she doesn’t have her academic responsibilities weighing her down so she’s really silly and funny in the movie.” Aside from having similar personalities, Anna Grace felt another connection with Chloe due to her parents both being doctors in real life. “Sometimes I-Anna Grace-feel like I’m a doctor by association. So I feel like I can kind of tune into that like I’m studying to be a doctor because I have that background knowledge.”

“But I differ from Chloe in that sometimes I can play it a little cooler than Chloe can,” she laughed before continuing, “Chloe has a love interest in the film and she kind of just walks over to him and I would play a littler harder to get. I would wait for him to come to me. But when Chloe sees this guy she likes, she just wanders over and is like, ‘Hi!'”

While Anna Grace can be cooler when it comes to things such as flirting, both she and Chloe carry a drive and a dedication to go after what they want. Originally from Birmingham, Alabama, Anna Grace impulsively moved from her then home in New York to California after a weekend visit for a musical callback. “Oh my gosh, it was the biggest risk of my life,” she exclaimed about the move, “I came to visit…I was out here for literally a weekend, I was only supposed to be out here for two weeks. I was actually staying with my friend Jordan Fisher who works a lot on Disney Channel and stuff, and so he was introducing me to all his friends and taking me hiking and I was seeing how beautiful everything is and three days into my trip, I called my mom and was like, ‘Ummm…I’m staying.’ And she was like ‘Are you sure? Well, Okay!'” Her friends back home helped her with her move and before she knew it, she was living in California. “It was like the biggest risk ever and I only had a few friends, but I knew this was where I was supposed to be. And it taught me that if I put my mind to anything I want to do, I can do it. I have control over everything in my life.”

After her risky move, she didn’t find herself afraid of taking any more risks, “I sorta learned that like taking risks is absolutely vital to being happy and succeeding on like your own terms,” she responded when asked about what she learned about herself in the past year, “so I feel like I learned that if I want to do anything, I can do it, I just have to set the goal and work really hard and I’ll make it happen.”

When asked about any obstacles and how she overcame them, she thought hard before speaking about an obstacle many actors face, “I feel like I faced it pretty quickly, but I realized an obstacle is that I can work so hard and if I walk into the room and I work so hard on the scene, if I’m not exactly what they were picturing, I’m not going to get the role. And I can’t put myself down, I just have to wait until the perfect part comes to me and it will. And I will continue to go and continue to work and that’s how you stay positive while auditioning. It’s how you stay so positive when it gets to be so monotonous, it’s when you know that the perfect part for you is going to happen and your life is going to take shape however it’s supposed to, you just kind of have to trust the plan, you know.”

While she can still be considered fairly new to the industry, Anna Grace originally got her start at a young age with the help of a great Lindsey Lohan movie, “Well, my mom says that when I was like 8 or 9, I would watch The Parent Trap like four times a day. And the LOVE song by Nat King Cole that’s in the film, I would walk around the house singing it. So my mom was like, ‘we should get her voice lessons since she likes to sing!’ So I actually started as a singer…” After getting involved in a theater program in Jackson, Mississippi for a year, her family moved to Birmingham, Alabama where she joined a huge professional theater community.  “So that’s where I got really, really serious about it,” she commented about her time in Alabama, “and I did programs for 10 years in this theater conservatory until I came out here [California] to film acting class and I was like, ‘Whoa, this is so fun!’ So one kind of informed the other,  I started out singing, which is crazy because I feel like I’m so into acting now. But I still like to sing, of course.”

Returning to her musical theater beginnings, Anna Grace is set to work in the musical Prom directed by Tony Award-winning Casey Nicholaw of The Book of Mormon, Aladdin, and Something Rotten! fame. “He’s so fantastic and has such a vision,” she exclaimed complimenting Nicholaw, “I’ve always had Broadway dreams, but I just got back from New York getting a slab of it so hopefully it’ll, you know, go all the way to Broadway so I can say I’ve been on Broadway, but it’s been so much fun, I can’t wait to see what’s next for it.”

Although she’s working on Prom, the next role you can see Anna Grace in is the highly anticipated Scream Queens, a horror comedy created by Glee and American Horror Story creator Ryan Murphy. “I guess I love that it’s such a new genre of horror. I feel like it’s something that hasn’t been on a screen, ever,” she gushed about her favorite thing regarding the show, “and it’s so hard to wrap my mind around exactly what it is and I really can’t wait to see it all put together on my TV screen because I just can’t even really picture it. So I guess, the thing that I love is that it’s just such a unique genre that I just can’t believe I got to be a part of. It’s like a new revolution of television.”

On the show, Anna Grace plays Bethany, a character who she acknowledged was significantly different from Chloe, but still just as fun to play. “Bethany is like the super evil mean girl, from like 20 years ago, so she’s got her own secrets and she’s pretty darn mean, even to her friends,” she laughed. “But she was a blast to play, I feel like playing a mean girl is so much fun to play when you can find the comedy in it. So it was just so much fun I just could not believe I got to have a part in it. It’s been so much fun.”

Being a part of the flashback cast, Anna Grace worked mainly with actresses Chelsea Ricketts (10 Things I Hate About You, Secret Life of the American Teenager), Grace Phipps (Nine Lives of Chloe King, Teen Beach Movie), and Anna Margaret Collins (Instant Mom). “We all got so close because we play all the friends from the 90s and we actually hang out in L.A. we have like a Bachelorette group for this season of The Bachelor,” She laughed befoe continuing, “so it was great hanging out with those girls and hanging out in each others hotel rooms. It was just so much fun.”

You can stay up to date on all things Summer Forever by following their Website, Facebook, and Twitter accounts. Summer Forever is available on iTunes starting tomorrow.

You can stay up to date on all things Scream Queens by following their Twitter, Website, and Facebook. The 2-hour premiere of Scream Queens airs on FOX September 22, 2015 at 8/7c.

Teen Choice Awards nomination season has come and gone with fans eagerly hashtagging categories for their faves to be nominated in. From the classic categories such as Choice…