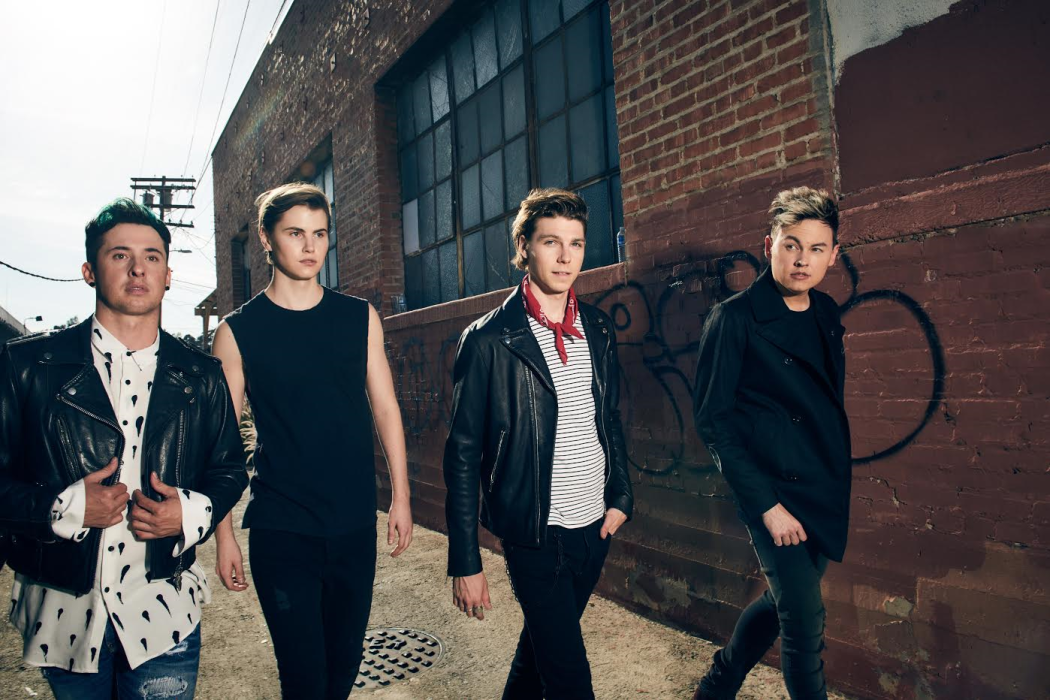 For Pop/R&B group After Romeo, success has been a steady climb upward since their formation in 2013. A great representation of what can occur when East Coast meets West Coast – members Drew Ryan Scott and Jayk Purdy are from Las Vegas, Blake English and T.C. Carter are from Atlanta – the group has been coined as “The Next One Direction” by People and Billboard Magazine.

“We thought to ourselves, ‘What’s more universally known than the story of Romeo & Juliet?’” the group says about their band name ‘After Romeo’. “The passion we have for our music and our fans is just as strong as the passion Romeo and Juliet had for each other.”

For the group, their passion for music began at a young age. In fact, Drew says he wanted to be a musician since he was a kid. Jayk echoes his statement and calls the success of After Romeo a “dream turned reality”.

“It’s more like my entire life I’ve thought, ‘I can’t imagine doing anything else.’” Blake comments on his passion and drive to focus on music as his career.

It wasn’t until T.C. quit playing baseball to move to California that he knew music was the journey he was to partake in.

Since 2013, the group has come out victorious against 20 other talented hopefuls to land in the final 5 of Macy’s iHeartRadio Rising Stars Contest as well as toured with other artists to hundreds of school as part of the “Bully Proof Tour”.

In the time since they first came together, Drew acknowledges their growth. “We have definitely all gone through a lot since then and it definitely shows in our music,” he says.

It’s the many experiences together that Jayk credits to their bond. “It’s allowed us to become so much closer as a group. We are brothers.”

“We’ve learned to work as a unit,” Blake says about what they’ve learned since they first started. “It’s not easy to put four people together and ask them to be one artist, but I think we’re doing a pretty good job!”

This fact can be seen through their growth in music. There’s a certain confidence and solidarity as a group in their newer music that was absent when they were first starting out. T.C. points out the growth as well, saying that listeners will “definitely hear the growth” compared to when they first started. 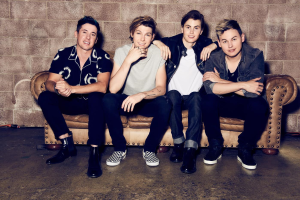 This past summer, After Romeo released their ‘Good Things’ EP, which hosts five songs and one remix. The title song of the EP starts off with an emphasized focus on the guitar before submerging the listener into the voices of After Romeo.

“We felt really excited and accomplished,” the group says about finally releasing ‘Good Things’ after months of working on it. “We finally have a sound that truly represents us and now we can’t wait for our fans to see the live show. Creating is at our heart and soul and we love to show our fans what we’ve been working so hard on.”

Describing their music as a mix of pop and R&B with a little bit of soul, After Romeo says of their music, “It’s fun to listen to and feels good. It’s full of energy. We are all very different people with very different tastes in music, but we all come together to create this unique sound.”

“I think Pull Over,” Drew comments as his favorite song from the EP, “because everyone has been in a car and noticed the hottie in the car next to them and wanted to say something.”

Jayk agrees with Drew’s song choice and adds that the group loves the song. “That was the first song we recorded for the new EP. It’s also definitely the song that gets stuck in your head the easiest,” Jayk says of the song. Pull Over has snapping and a nice guitar beginning, the latter which follows through the first verse and chorus. The lyrics contain phrases like, “I wanna get stuck at this red light so I don’t lose you.”

T.C. supplies, “It’s just one of those songs that you can dance to and it makes you feel good.”

“I think we all love Oprah because we get to show off our vocal skills,” Blake comments, referring to the slower song on the EP where the pre-chorus and chorus showcases vocal runs from the group.

When it comes to performing the songs live, Drew and T.C. don’t stray from picking Pull Over as their favorite song again. While Blake picks Shut Up And Kiss Me, the dance-pop track from the ‘Good Things’ EP that can’t help but cause listeners to want to stand up, dance, and clap along, Jayk picks the title track Good Things.

“[Good Things] has so much energy and we love the dance,” Jayk says. “We have to thank our choreographer Troy Kirby for the awesome moves.”

The creation of the songs on the EP are due in large part thanks to Drew, the main writer and producer for After Romeo. Considering the fact that he has written and produced for other artists, Teenplicity asked him what the biggest difference is when it comes to creating music for After Romeo.

“It’s a lot harder to write for myself,” he confesses. “It has to be perfect and exactly what I want to say. Whereas when I’m writing for someone else, it has to be their ideas, their story, and their vibe. When it’s yourself, you have to make sure it’s you.”

Recently, the group found themselves partnered with Samsung for one of their campaigns. The commercial features After Romeo as performers at a concert where a dad records multiple performances on his phone, for his sick daughter to rewatch later.

“Samsung actually found us through Spotify,” the group says. “They heard our music and contacted our team and that’s what got the whole conversation started about us being in their commercial. Being supported by such a huge brand is amazing. It’s really cool because we have had fans tweeting us saying they’re seeing the commercial in different countries and on different TV channels so we’re really excited about that.”

Don’t expect their growing fame and success to go to their heads, however.

“We are always humble,” Jayk says of the members of After Romeo. “But it’s definitely a pretty cool feeling. It’s great when people love what you’re creating. I’m truly grateful for all of this.”

Blake adds, “It’s definitely a game of checks and balances. With each step forward, we take caution to not lose humility.”

“I don’t really view it as fame. We’re just doing something that we love to do,” T.C. says.

“It’s all very flattering, but it’s just become normal for my life and I don’t know any differently anymore,” says Drew of their rising status.

With their climb to fame reaching higher altitudes, fans have been multiplying. One fan in particular was eager to find out who each member of the group would love to share the stage with.

“It would be awesome to work with Troye Sivan,” says Drew.

“We would love to work with Justin Timberlake, Bruno Mars, Beyoncé, and Taylor Swift,” Jayk adds.

Blake gushes, “I would love to do a collaboration with Sia.”

For T.C., he lists Chris Brown, Ed Sheeran, Fallout Boy, and Panic! at the Disco. “I would definitely love to collaborate with any of those artists, plus EDM DJs like Diplo and Skrillex.”

In the future, After Romeo hopes for more success. Jayk in particular wants the group to headline its own tour and have their songs played all over the radio. “That would be awesome,” he says.

Blake hopes to keep growing and striving to be the best artist he can be.

“We want to inspire as many people as we can with our music,” T.C. begins to explain about his hopes for After Romeo’s future. “We want to show young people that if you pursue your wildest dreams, they can come true.”

As for the very near future, After Romeo has plans to tour this fall. “We’re actually in rehearsals right now,” they spill to Teenplicity. “It’s going to be a lot of fun and we can’t wait to meet all of the fans!”

Directly to their fans, After Romeo says, “Thank you to the ARmy for all of your love and support! We really hope we get to meet all of you on tour.”

“Good Things” EP by After Romeo is available on iTunes now.

Liam Carroll is Taking Fans on a Detour

When TBS officially premieres its new comedy show on Monday, April 11th, fans will get to see a series that is essentially a mix…