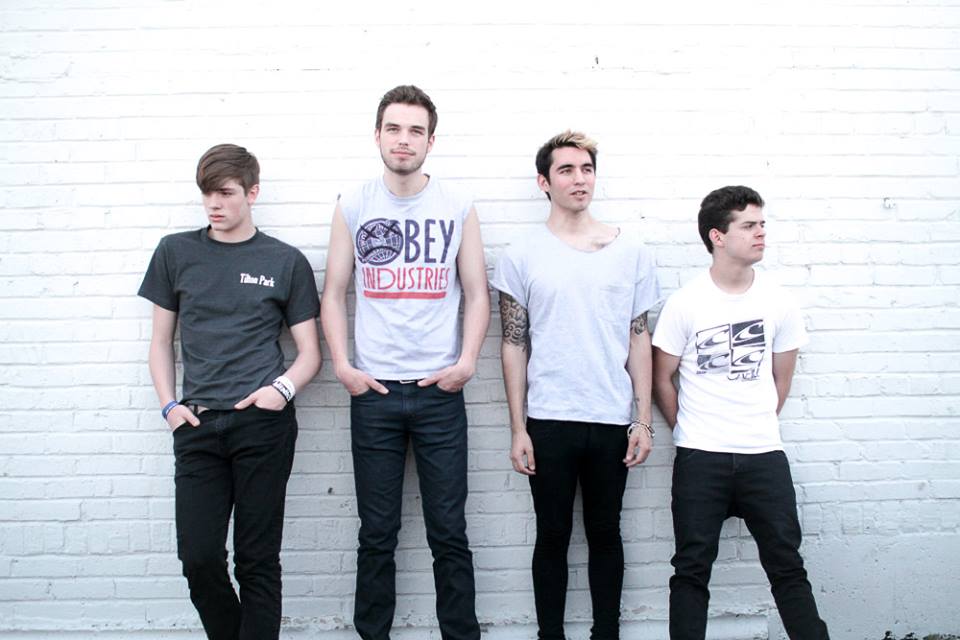 More often than not, when a group of people try to make a band, they never make it out of the garage. That’s not the case with The Resolution, a band of four incredibly talented and energetic, young guys from Downers Grove, Illinois. Patrick Mitchell (bass/vocals), Brian Moroney (guitar/vocals), Robby Kulik (drums), and Trevor Utz (guitar/vocals) make up the promising and independent pop-punk band who recently got the chance to play this years Vans Warped Tour on the Milwaukee date. The band had already been to the popular music tour as spectators and were incredibly excited to have the opportunity to be able to play thanks to their fans voting.

There’s not a single dull moment around these guys whether it’s watching their outstanding stage presence or simply talking to them. When we first met The Resolution, they were greeted by adoring fans in matching homemade shirts with the bands name and lyrics on them. The girls were incredibly giddy and the band was nothing but all smiles while taking pictures with and talking to them. A moment the band agreed was their craziest fan experience so far.

“I just appreciate any experience where people recognize us and tell us what we mean to them and just like the fact that we’ve come from being these kids in the basement playing Fall Out Boy songs to actually meaning something to people is pretty cool,” says Brian. The rest agree calling the sight of their lyrics on the back of the girls shirts “crazy weird” by Robby, “surreal” by Patrick, and a gleeful thumbs up by Trevor.

When asked about how they balance being in both a band and getting an education, Brian, who along with Robby just graduated high school, says that it’s all about perspectives as he and Robby didn’t do much their senior year. Meanwhile, Patrick, the youngest in the band going into his junior year says that while trying to balance school and the band is hard it’s “definitely worth it.”

The incredibly close-knit group also talked about what their favorite thing about being in a band was. Brian and Robby both agreed their favorite thing was performing with Brian describing it as awesome because it’s something they all genuinely loved to do. Patrick, on the other hand, admitted to practicing as his favorite thing because of the bonding the band gets to do which without a doubt shows when around them.

The amount of closeness that can be seen between the group is outstanding and brotherly like they’ve known each other their whole lives. Their ability to display harmony is shown in more than just their personalities but in their music as well. Their debut EP Hometown Heroes was just released last month with the help of producer Michael Govaere of Downbeat Studios and Zack Odom and Kenneth Mount credited with mixing. The band’s musical influences which consists of talents such as McFly, Fall Out Boy, and A Rocket to the Moon are evident in their catchy six song extended play. Some of the bands favorite songs from their EP include, “Better Than This” written by Brian and “Mess Last Night” written by Trevor.

When the band first took the stage at the House of Blues Chicago that Sunday evening, the crowd of young adults went insane dancing about and crowding the stage with most being able to quote the lyrics and sing along. Their 30 minute set was like a party to say the least with the band jumping around on stage, giving a shout out to returning concertgoers, and even singing happy birthday to a girl in the crowd.

With amazing music, a strong stage presence, and lovable personalities, The Resolution have just about every key ingredient needed to become successful especially with their dedication and obvious love for what they’re doing. At the moment, they’re focused on playing shows, writing more music, and as seen on Twitter, having a good time, bonding, and making friends. We’re excited to see how far these hometown heroes can go especially with so many supportive people behind them to push them farther.

You can keep updated on all things The Resolution with their Facebook, Twitter, YouTube, and Instagram accounts. Their EP “Hometown Heroes” is available on iTunes now. You can view pictures from the concert and interview here and check out our Youtube for all The Resolution Week videos.

Marcello Reyes on Pivoting, A League of Their Own, and Don’t Worry Darling

In a television show that casts Eliza Coupe, Ginnifer Goodwin, and Maggie Q as its leads, it is hard to imagine anyone being able…