As Amazon launches the fourth installment to its series of American Girl exclusive specials on the streaming platform today, viewers will be able to witness the dedicated focus this special has to “Science, Technology, Engineering, Arts, and Mathematics”. Various aspects of S.T.E.A.M. intertwine with the amazing inspiration that comes from nature in An American Girl Story: Summer Camp Friends For Life. The special follows best friends Z [Zoe Manarel] and Paz [Alison Fernandez] as they embark on an exciting adventure at a S.T.E.A.M. camp. When their aspirations for the summer are halted by the restrictions on devices, the girls find themselves befriending new people and finding inspiration in the world around them.

Zoe Manarel describes her character Z as someone who loves vlogging and making stop-motion films. “Z lives in Seattle with her mom who is a filmmaker and she also has a puppy named Popcorn!” the actress adds. “She is very unique and doesn’t care about what other people think of her and is proud of who she is!”

The uniqueness that makes up Z is something that Zoe has in common with her character, as well as her independence. “She likes photography and I like photography and filmmaking, we are both optimistic, non-confrontational and leaders,” she goes on to say. “We both like the sciences and we both LOVE a good mystery.” However, Zoe and her character are not completely the same. “I am a bit more goofy than Z,” she reveals. [Z] is more serious but overall, we both are pretty much alike!”

When at camp, Z hopes to learn more about stop-motion film and about other people’s stories and vlogging about them! “I think she is also excited to be surrounded by all these girls who love the same type of thing that she does!”

Her desires for the summer are put on hold by the device restriction at camp. Although Z isn’t happy with the decision, she does understand why Rae [Camryn Manheim] wants to limit the usage.

“However, Z does not understand why everyone has to be restricted from their technology just because only some people are obsessed with it.”

With their technology not at their disposal, Z and her friends find themselves amongst nature. Doing this inspires Z to include more nature in her photography, according to Zoe, as well as utilize the outdoors when making her settings for her stop-motion film. 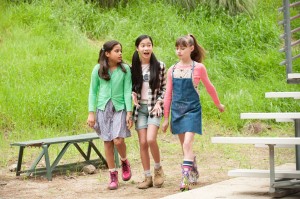 “I think that even though it is great to work indoors, exploring outside is also great because you never know what you might discover!” the young actress exclaims. It is because of being with nature that Z has learned to be more open-minded.

Zoe, much like her costar Alison, never spent her entire summer away at a sleep-away camp, however she did go to a summer day camp before. “My camp was a swimming camp,” she reveals, “and they helped you learn how to swim better! I had SO MUCH FUN and I made a lot of new friends there, too!”

Her perfect summer camp would include of her best friends, the actress insists. “The focus would be having fun in the pool and doing Origami and making slime.” Zoe gushes, “Everyone would have their own personal chefs who would cook you whatever you wanted every day and they would cook it within a blink of an eye!!”

Zoe explains that stories like An American Girl Story: Summer Camp, Friends For Life are important as they show kids that teamwork is not only really important but is a lot of fun too. “Also, girls that like S.T.E.A.M. and science will see that it is cool and it isn’t ‘nerdy’, and if you didn’t have science, the world would basically not run at all because science is in everything around us.” She continues, “Summer Camp Friends For Life is such a great special and I think it is a great special for kids of ALL ages! It shows the characters not giving up, working as a team, sharing love and experience and information and hope. These are really important life lessons that apply to everyone.”

The heart that is behind the special is definitely one of Zoe’s favorite aspects of it. She also adores the nighttime scene in their cabins. “It was like, pitch black and you could barely see, and they made a really crazy wind storm that we had to go outside in,” she says of filming the scene. Her excitement from the time shooting it is still evident as she says, “It was a really scary scene but it was so much fun to film!!!” 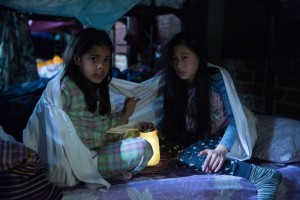 Being a part of this special had definitely been different from a lot of work Zoe previously did. “Most of my time performing was spent on Broadway in “Matilda the Musical”. As you can imagine, film and theater acting are two completely different kinds of acting,” she says.

“For example – when you are doing theater, you have to be louder and your actions need to be bigger so that the person all the way in the very back of the balcony can see and hear everything you do!” Zoe explains. Comparing it to film, she says, “Small things matter more [in film], because the camera is up close and you don’t have to worry about making your performance BIG!” Another difference between the two comes with the audience interaction.

“In theater, you also get a direct response from the audience and you get a different show every time and it’s never the same! It is also live, so you don’t get to redo anything, so you just have to think fast and fix your problem or improvise until the next scene comes. In film, nothing is live so you get to retake things and make mistakes once in a while, but you don’t get to see how the people who are watching you respond!”

Zoe goes on to say, “As you can see, theater and film are two completely different types of acting and I couldn’t choose one over the other because I love them both!”

Thankfully, Zoe won’t have to choose between the two anytime soon. And when she’s on her break, whether from the stage or from in front of the camera, she can now take time with her very own American Girl doll.

“I was over the moon excited to hear I was not only going to be in an American Girl special but ALSO to be representing a doll!!!” the actress can’t help but exclaim. She doesn’t hide her joy or excitement as she says, “I mean, I was basically running around the house going crazy!! I have always loved and really looked up to all the American Girl characters. I loved all the dolls, and even have a couple of my own, so to be able to portray one was such an honor for me.”

Zoe had such a great time participating in the special that she expresses how much she enjoyed doing it. “I can’t wait for the new special to come out!” 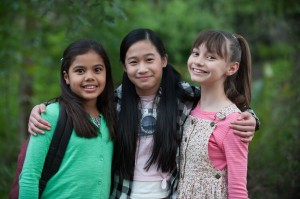