As part of this special event, the 3rd Teenpliciday features an exclusive interview with Willa Skye of Disney+’s Godmothered. Willa talks about her character, what it was like to film alongside Jillian Bell, and her holiday traditions!

One quickly realizes how impossible of a task it is to not start smiling whenever Willa Skye is in a scene in Disney+’s recent release, Godmothered.

Much like her character in the film, the actress is bubbly and constantly smiling as she speaks. She shares about her dog, a rescue that’s a mix of a bit of everything, from Golden Retriever to a Lab/Shepard mix, who she loves and deems a “big pupper”. He is one of the things that she missed while filming.

A native New Yorker, Willa was lucky to shoot Godmothered in Boston, just a few short hours from the city she calls home. “Sometimes I missed my friends, but I got to see my family and dog on the weekends,” she says of the experience, though the longing she undoubtedly felt at the time of filming is no longer there. Instead, she excitedly thinks of her memories from set. 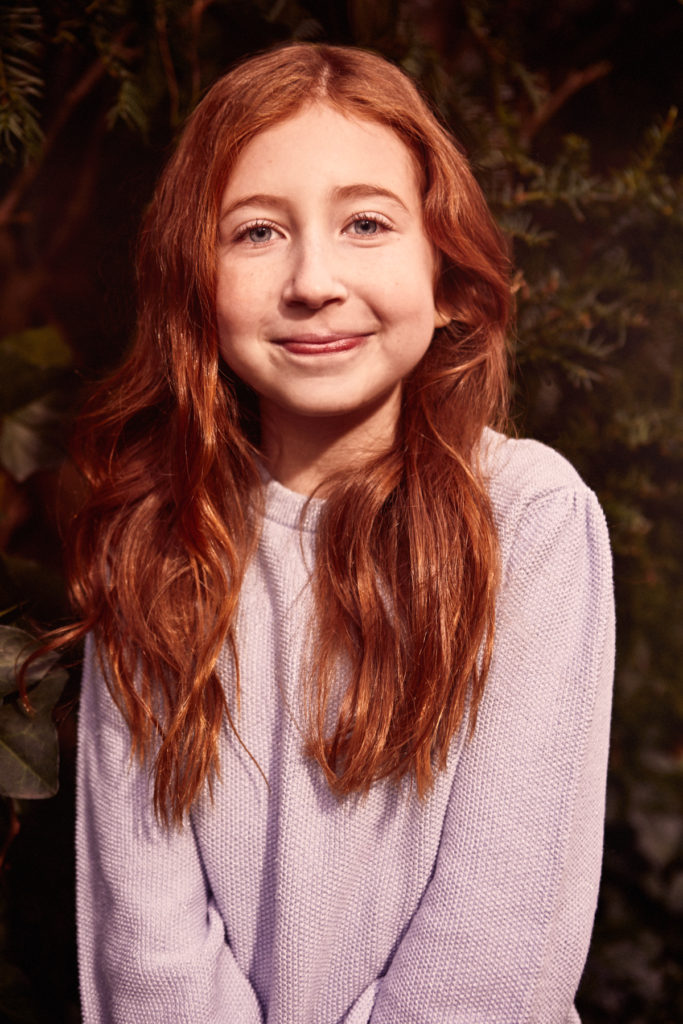 The film follows fairy godmother-in-training Eleanor [Jillian Bell] who, in hope of saving the fairy godmother program that is facing extinction, is intent on answering a letter from a little girl named Mackenzie to show that the world still needs fairy godmothers. It’s only upon meeting Mackenzie [Isla Fisher], now an adult, that she realizes she may be in over her head.

Willa plays Mia, one of Mackenzie’s daughters in the film.

“She is so exciting, and so fun and kind and brave,” Willa says of her character. “And she loves animals, like me!”

The happiness and optimistic nature of Mia represents the kind of person that Mackenzie was when she sent the letter to the fairy godmothers – a drastic contrast to her adult persona. It’s no question then why Mia is the one to welcome Eleanor with open arms at her sudden appearance in their home.

“She is so excited,” the actress says of how her character reacts to the new houseguest.

Throughout the film, Mia and Eleanor are the connective tissue between all the family members and the magic Eleanor has. Mia shares what life has been like since her father passed, letting the fairy godmother understand why Mackenzie has changed, and Eleanor works hard to bring confidence and selflove to the entire household. When Eleanor stumbles in trying to help someone, Mia is right beside her, encouraging and participating to get others involved. One such example is when Eleanor, in an attempt to help Mia’s older sister Jane [Jillian Shea Spaeder] regain her confidence in performing, begins to sing in the middle of the park and Mia chimes right in, which then gets her sister involved.

With all the fairy magic happening on screen, there’s also a dash of Christmas magic as well. Between the Christmas concert and paper snowflake crafting, Eleanor and Mackenzie make time to decorate the house – with the help of a few furry friends. Mia and Jane are soon surprised by the magnificent holiday display. “It was really amazing and beautiful!” Willa says of the lights, only the tip of the Christmas iceberg in Godmothered. 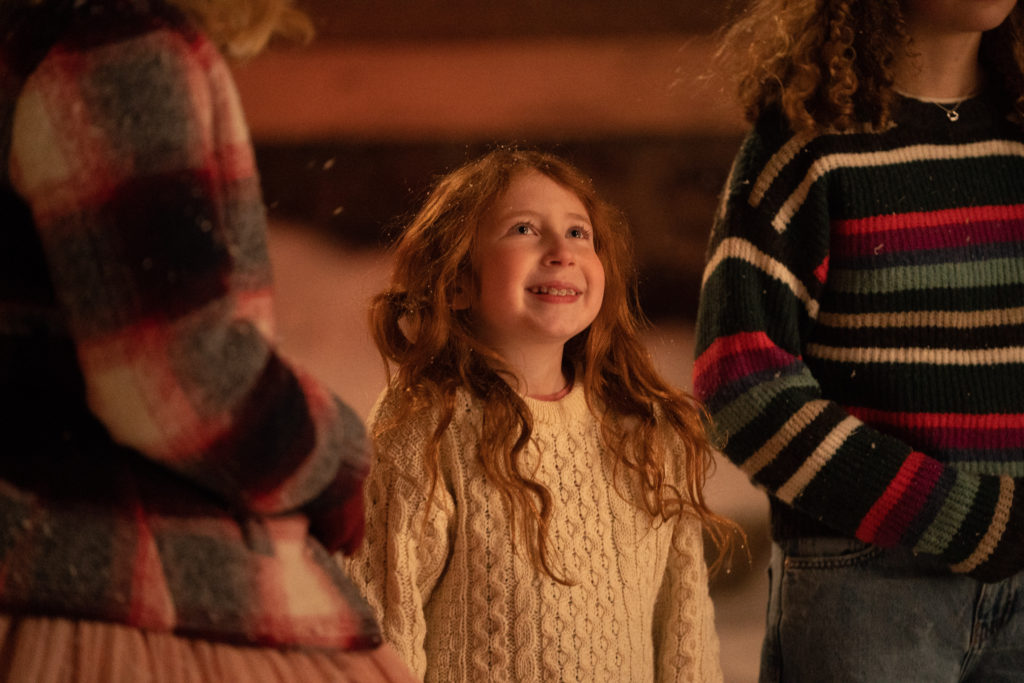 “It’s really, really Christmas-y,” she says with a laugh as she discusses how the holiday season is interwoven into the story. “Trees, lights,” she begins before teasing, “a flying carriage…”

The flying carriage puts more than one spin on the traditional fairytale staple. Not only does it fly overhead as a Christmas parade marches below, but instead of a pumpkin, the carriage is made from a watermelon! “It’s so fun,” the actress says of filming those scenes, one of her favorites in the film.

Having Isla Fisher portray your on-screen mother and Jillian Bell as your mother’s fairy godmother is hard to beat. “Well, it was amazing,” Willa says of the experience of acting beside them. “They were so kind, and so fun to work with and learn from.” In fact, the latter even offered her some advice.

“Jillian Bell said just to be yourself, because everybody loves the true you.”

The experience of having a fairy godmother under her belt, when tasked with assigning Eleanor to be the fairy godmother of any Disney princess, Willa has the perfect royalty in mind.

“Probably Anna and Elsa from Frozen because they all love adventure and they all believe in magic,” she happily states. “Eleanor would be perfect!”

In real life, Willa knows exactly what she’d enlist a fairy godmother to help her with. She shares that she has two answers – a fun one and a serious one.

“My fun answer is to make my family not allergic to cats, and my dogs to like cats so I can get a million cats!” she exclaims. When asked what kind of cat she’d like to get first if she could, Willa says, “My first cat that I want to ever get would be [an] orange cat with green eyes, and all of the other ones that I would get [would be] the entire pet shelter.”

On a more serious note, Willa expresses that she would like the fairy godmother’s help in getting rid of Coronavirus.

The global pandemic has put a hold on many things this year, or outright cancelled them. With the virus still very much apparent in the United States, holidays are looking very different this year.

“This year it’s just us,” the actress says of how her holidays have changed because of the pandemic. “Not with any grandparents or cousins or anything.” However, her family still plans to FaceTime the rest of the family during their Hanukkah celebrations. 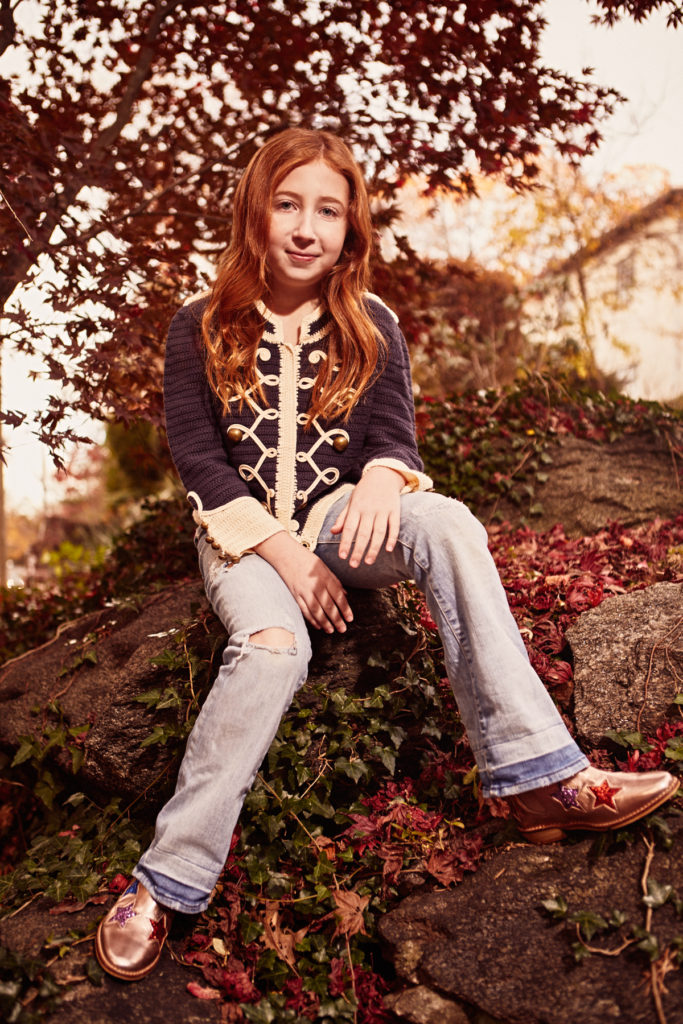 “My favorite holiday tradition is for Hanukkah; my parents hide the gifts so we can’t find them and we have to play Hot & Cold to find them!” Willa happily shares.

Her favorite holiday memories over the years spans the fall and winter. Unable to choose, she fondly thinks of the Halloween parties she’d go to with friends or making gingerbread houses with her sister. “Mine stay up if I hold it for an hour or I wait until the frosting dries,” the young actress shares the gingerbread house-making tip.

When it comes to making those houses, it wouldn’t be surprising to see a holiday film or two playing in the background. Willa loves A Nightmare Before Christmas, a film she watches during both Halloween and Christmastime. “The animation is so cool,” she gushes. “I also love the animated Rudolph the Red-Nosed Reindeer. It’s so cute!” If she could have been cast in any other holiday movie, she would have loved to be Clarice in Rudolph the Red-Nosed Reindeer.

Until the next Rudolph movie is in the works, audiences can still enjoy Willa bringing the holiday spirit in Godmothered. “I think everyone’s going to love this amazingly magical movie!”

Godmothered is available to stream now on Disney+!