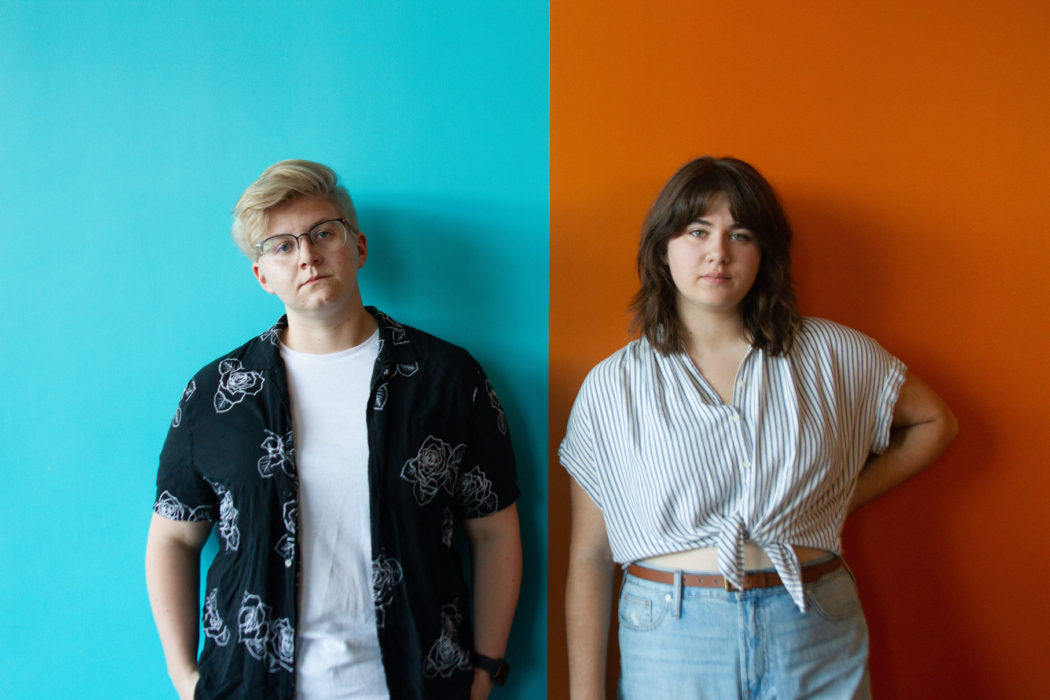 LA-based duo Maple St.’s bio on their website promises you synth-driven pop songs straight out of your favorite coming of age film. Their songs deliver on the promise. Consisting of Alyssa Wilkens and Jillian Allen, the couple has managed to (on paper) live the kind of coming-of-age queer love story that many dream of seeing on a screen or in books and at the same time, the two are actively looking for ways to poke holes in that kind of romanticizing thinking of the LGBTQ+ community. Because they’re not perfect, they’re people and like most of us, are also figuring out how to navigate the anxieties associated with that and then some.

But before we talk a walk on that street, we have to retrace our steps. In a wonderful meet-cute fashion, Maple St. started in a guitar class where Alyssa and Jillian met when they were in high school. But both of their start in music began earlier. Alyssa started playing guitar when she was eight while Jillian did musical theatre. “The first band was sort of an adolescent practice run for what we’re doing now with Maple St.–practice in creating authentic music and in dating your bandmate while maintaining a healthy relationship,” Jillian explains. “Neither of us remembers consciously deciding to be in a creative partnership, we just spent so much time together writing music that it seemed like the natural next thing.” 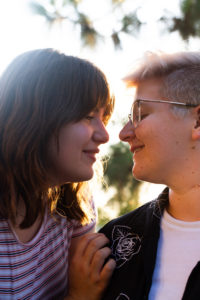 The coming together felt natural, however, the girls admitted in a previous interview that they struggled to figure out the sound. “It’s really hard to find your sound when you’re on your own, but to find a sound that genuinely resonates with two people takes even more work. We both had pretty different ideas of what we wanted the music to sound like, and we had to do a lot of experimenting to find something that felt authentic to both of us–when we wrote ‘Holes in My Shoes’ we knew we had found it,” she says.

“In the last four years, we’ve both gained a lot of confidence in our music and in ourselves in general,” Jillian looks back at where they were at sixteen beginning the band. “There is so much more we need to learn and experience, but now we have a much better idea of who we are and what our purpose is (with our music and just in our lives).” That feeling of looking for clarity and purpose is just as present in their music as it is in that statement–as well as the willingness to admit to the feeling of adolescence.

There is so much more we need to learn and experience, but now we have a much better idea of who we are and what our purpose is (with our music and just in our lives).

“We thought we would feel much older at 20 than we do. Being in your 20s sounds very adult when you’re in high school until you get there and realize it’s not,” Jillian explains. “Our problems and our anxieties have shifted with age, but they are still there and they are still a big part of who we are. Despite that, we are fortunate to have each other and to have a good sense of what we want to do with our lives–and that’s a gift.”

Their latest single, “Rockstar” reflects on that heavily. The upbeat song stems from a similar vein of Alanis Morisette’s ‘Ironic’ (and a dash of synth-pop) with how it makes you want to scream the lyrics regardless if you’re in a car or in your room. But even the sound can’t cover up the angsty, anxious feelings the song sings about. “We sat down with our co-writer DJ De Neve to do a session and we had the first line of the song done,” Jillian begins about the origin of the song. The lyric she’s referring to goes, ‘I’m still a bad person, I’ve just got pretty eyes.’–a lyric that she says is her most autobiographical lyric later on in the interview. (Alyssa’s is the lyric, ‘All I’ve got is holes in my shoes’.) “We wanted to expand that into a song that was just all of our insecurities listed one after the other, and I think we nailed it. The funny thing is, we both have extremely supportive parents, but when we wrote the first line of the chorus it was perfect. Artists spend a lot of time defending their choices to the world, whether it’s to your parents or yourself, and so that line was everything we needed to say–even if it wasn’t directly about our lives,” she states. 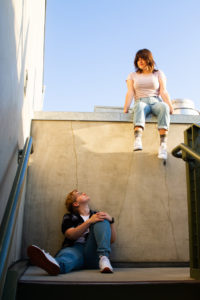 It’s no secret that pop music has always been an integral part of LGBTQ culture and as such, LGBTQ culture has had a massive influence in pop culture for decades even when the inclusion has been coded or sidelined. From the likes of bisexual artists such as Freddie Mercury and David Bowie remaining some of our biggest artists to date even posthumously to Prince (among many others)  playing around with the gender binary. Diana Ross’s “I’m Comin’ Out” was immediately a pride anthem when it dropped in the summer of 1980 while peaking at number five on the U.S. Billboard Hot 100 and number one on the disco chart. Meanwhile, Tracy Chapman’s folk-rock record “Fast Car” became a contender for both Record and Song of the Year at the 1989 Grammy’s with the artist taking home 3 other awards that night. In the following year, Madonna’s video and song “Vogue” took over the world and without a doubt owes credit to the Black American and Latinx LGBTQ community that created ballroom. Of course, this only scratches the surface and even then the scratch is hollow although the impact remains deep.

When we fast forward to now, queer pop is being considered a genre of its own and thanks to fandoms, making its way into the mainstream with LGBTQ artists like Janelle Monáe, Kehlani, Halsey, Hayley Kiyoko, The Japanese House, Troye Sivan, Mykki Blanco, and MUNA getting to outwardly exist in the space and be credited. “We struggled a lot with whether or not to be public about our relationship regarding the band. We were worried if we branded ourselves exclusively as an LGBTQ+ duo we would close our music off to those that aren’t part of that group,” Jillian admits. “That being said, as we got older, we felt it was more important to build up the Queer Community with representation than to make our music instantly relatable to everybody. There aren’t nearly enough love songs by women for women and we’re working on changing that,” she smiles.

…As we got older, we felt it was more important to build up the Queer Community with representation than to make our music instantly relatable to everybody. There aren’t nearly enough love songs by women for women and we’re working on changing that. 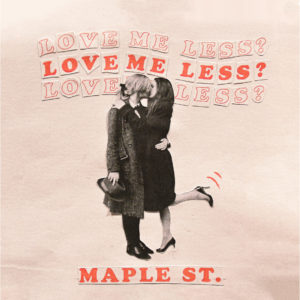 One example of this is their song “Love Me Less?” which the two made about breaking the stigma regarding queer relationships being painted as perfect and magical things as opposed to real relationships that take work. Four years into a relationship that started at sixteen and also doubles as a creative career endeavor, the two agree that they felt the pressure without knowing where to look in order to lessen it.

“It was really hard transitioning from that perfect honeymoon phase to a working partnership,” Jillian admits. “There wasn’t good representation in movies and on TV about gay relationships when we were growing up, so we definitely had distorted ideas about how hard it is to love another person. Despite that, I think we’ve done a great job navigating our adult lives together through the bumps in the road.” Although the two don’t consider themselves to be “real adults” just yet, that feeling of maturity still exists as they attempt to figure it out.

And while their romantic relationship with one another is an important part of their work and how they create, the two acknowledge that while they want to make sure to create music about women loving women and love in general, they want to expand past that as well. “It’s important to us that not all of our songs are centered around romantic love, but that being said, we’re pretty open about the topics we cover. We’ve got a lot of ideas for our first EP that we’re pretty excited to share,” Jillian smiles.

Moving towards talking about the EP, the two have taken inspiration from indie and alternative pop to make their work. “We love MUNA and The Japanese House and lately we’ve been listening to Finneas’ EP on loop,” she says while also giving a shoutout to COIN’s new album Dreamland and Orla Gartland’s new EP Freckle Season. “There’s honestly been so much amazing music coming out that inspires us to keep working on our sound.”

Whether it’s about a romantic relationship or a parental relationship, we tend to write about feeling like the world is moving too fast and you can’t keep up.

“We won’t share too much about the EP since we’re still making decisions regarding when and how to release the next songs, but for the songs we have out now, there’s definitely an overarching theme of being left behind. Whether it’s about a romantic relationship or a parental relationship, we tend to write about feeling like the world is moving too fast and you can’t keep up,” she shares about their current singles and upcoming EP.

The two are in discussion at the moment figuring out what exactly the EP will entail. Jillian shares that they’re deciding between taking the existing singles and putting them on an EP with new songs or starting a completely new EP. “But, we will say we’ve been writing a lot of new material,” she says. “We’re expecting to have an EP’s worth of songs done by the end of the summer, and in the meantime, we have a remix (and possibly an acoustic song) coming out!”

Closing out the interview, I ask the two what the other has inspired out of the other. Alyssa shares first. “Jillian is great at capturing a specific feeling in her lyrics, she makes the songs feel personal while still being relatable to everyone,” she says.

“Alyssa is incredible at taking an idea and improving on it, without changing it or steamrolling over it. She has an amazing work ethic and a gift for coming up with these really insightful lines whenever I hit writer’s block,” Jillian compliments.

We make playlists to add to our artist page on Spotify a lot, and we actually made this one above (with some extra songs) – it’s called “we’re teenagers in the body of 20-year-olds” if anyone wants to give it a listen!

Ashley Gerasimovich on ‘The Detour’

With the summer season right around the corner, that means the huge increase in family vacations. For the fictional family in the TBS sitcom…