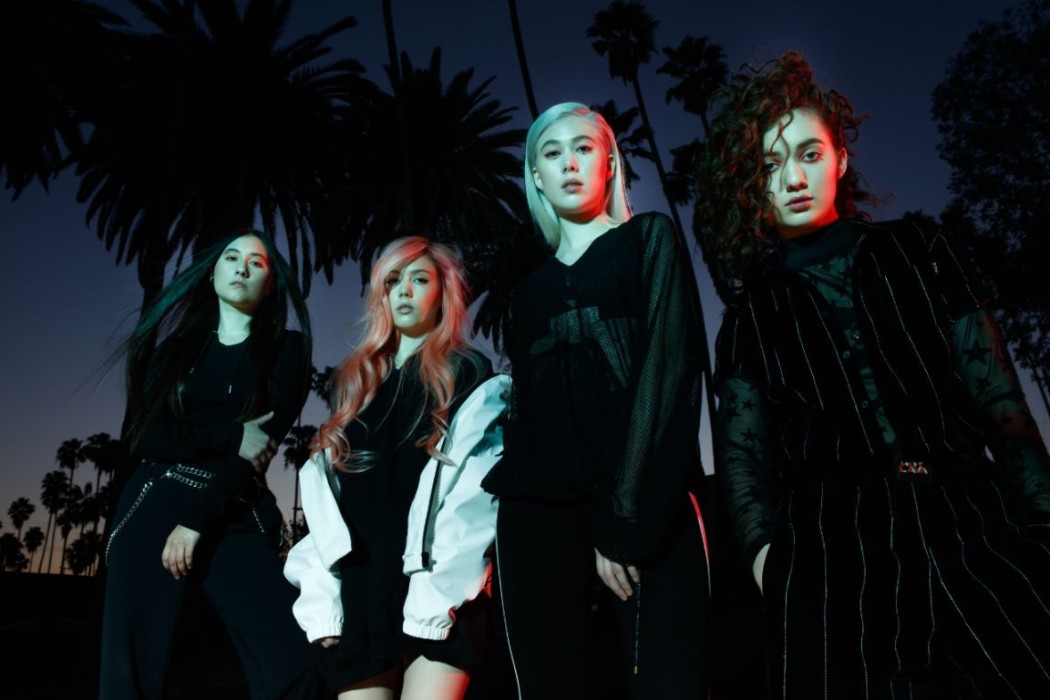 If you read the about page on pop-alt band Crimson Apple’s website, they focus on the dreamers in them and how their dreams churn out motivation. More than that, it’s also about authenticity and remaining true to yourself even when someone/something tries to take that away from you.

Made up of Colby (lead vocals, keys, and key-tar), Shelby (lead guitar and vocals), Carthi (bass and vocals), and Faith (drums) Benson, the group has seen the forbidden fruit and refuse to take that bite–instead they’re looking to offer an alternative.

Named after “Wine Red” by The Hush Sound (one of the first songs they used to cover when starting out), calling themselves Crimson Apple is not only a way to establish their sisterhood and familial commitment but also their power and strength, “It’s always been our goal to create music that is cinematic and powerful, and we needed a color to match that.”

“When we started Crimson Apple, it was important for us to have a unified image as a group, as well as a clean and powerful look.” They note the colors of black, white, and red to be their key colors and how it stems from their band’s name. “Since moving to California and being surrounded by so much fashion, our style has really elevated over the last couple of years. Each of us has always had different interests and styles growing up, so it’s really natural for us to choose our own personal take of each look we wear.”

Being a group of four sisters, they were born and raised in Hawaii where they first found their love for music. “There are definitely differences between the two music scenes. In Hawaii, the scene is a little more family oriented. It was a very nurturing environment and the perfect place for us to hone our craft,” they explain. California, on the other hand, offers a more competitive environment–a challenge that they enjoy taking on.

“We love both environments as they’ve both helped shape us as musicians. Our sound has definitely changed a lot since moving to LA,” Crimson Apple reflects. “We’ve been exposed to a wider variety of music here than ever before and that has definitely inspired the music we write today.”

Starting out, Colby and Shelby took the reigns with additional members before Faith and Carthi joined. “When Faith and Carthi joined the band, everything just clicked immediately. Even though the two just picked up their instruments when we started the band, we had such a great chemistry together and everything definitely felt so natural,” they talk about turning the band into a family affair.

“Being in a band has definitely brought us a lot closer as sisters. We connect on a really deep level because not only do we get to work and create together, we are always going through the same struggles at the same time,” they reflect on how being a band and being sisters have taught them about each other. “It’s been a blessing being able to lean on each other throughout our careers.”

It’s a blessing being able to lean on each other throughout our careers.

The band’s latest single is titled “Can’t Get Out of Bed.” With upbeat instrumentals and harmonies that compel you to dance, the girls sing about the opposite. “The song is inspired by our lead singers struggles with depression and how it was hard for her to tell the people in her life about it,” they explain. “We always wanted the song to be something people can relate to and find solace in.”

They mention that from the beginning, the song would have a clear contrast between what it was saying and how it sounded, “This in itself was meant to be a metaphor for how even though someone seems happy and simple on the outside, there could be a darker struggle that resides within them that people can’t see.”

“When writing ‘Can’t Get Out of Bed,’ we started to envision us in red in the middle of a beautiful white room. Building off of this image, we created a world within the music video that represents both the meaning of the song and our concept as a band,” they continue when we discuss the accompanying music video.

In it, we see lead vocalist Colby singing about struggling not only to get out of bed but also breaking out as her sisters stand by and support her in various ways. “Throughout the story of the music video, you see us in this beautiful room, but we’re still trying to escape,” they further explain. “In the first metaphor, the house represents the mind and depression as a ‘cage’ we’re trying to escape from. “And at the same time, we wanted to express that as beautiful as it may seem on the outside, you never know what someone’s going through on the inside.”

The symbolism in the video doesn’t end there. the overall setting being a white house also represents paradise which brings them back to their roots. “It parallels the story of us growing up in the paradise of Hawaii, but aspiring for more and leaving our home behind,” the band shares.

“In general, our fashion choices within the video reflect emotions we wanted to portray.” Maybe it’s expected that the girls would wear red given their name. The group explains that the meaning of the color in the video does have some parallel to what it means to them collectively as a band.

“One thing that we’re constantly realizing every time we sit down to write is how similarly we view the world and our experiences, although the four of us have quite different personalities.” In terms of writing together, this is what surprises them the most. “It’s helped us to bond and connect on a deeper level than we think normal siblings experience. There are literally no boundaries between us.”

And at the same time, we wanted to express that as beautiful as it may seem on the outisde, you never know what someone’s going through on the inside.

In terms of their upcoming music, Crimson Apple shares excitement for their upcoming EP releasing early this year. Giving hints for what we can expect, they let me know that the project manages to be a collection of songs they’re very proud of and also an anxious departure from the last body of work. “We’d say the EP will include a range of songs that fall on different spectrums between both our pop and rock influences,” the band adds that the project is also a lot more produced than previous work and they’re excited to share their more elevated sound.

“As a band, we tend to take our music very seriously, which can sometimes add a lot of pressure on us,” the four start about a concept they want to explore in the future. “The band constantly talks about doing a project, where anything and everything goes, no matter how weird it may seem. We always think this concept would be an interesting experiment for the band that would allow us to create without the pressures and expectations we put on ourselves.”

A couple of months ago, the band participated in the High School Nation tour–a project dedicated to helping public schools advance the arts and other recreational activities. “The High School Nation tour was absolutely incredible! It’s such a unique experience getting to go into these high schools across the nation to put on a music festival for the students,” they point out the excitement that came with seeing students engaging with and enjoying their music, being inspired by the event, and getting to know the other artists.

“We definitely made a lot of memories and friendships on the tour that we’ll always hold dear to us. All of the artists and crew on tour were incredibly hardworking and kind, which made HSN such a positive experience for the band,” the girls reminisce.

We really want to be a positive force in the world.

Unfortunately, the girls share that this accepting and affirming experience isn’t always what they’re met with despite proving both their talent and work ethic. “…When people find out we’re an all-girl band, they don’t have very high expectations of us,” they admit. “This has been a constant struggle throughout our careers, but ultimately has made us work even harder to prove ourselves.”

But, they do show their optimism as well, “We see a lot of incredible all-female bands working the scene right now, and we hope together we can change this perception people have about female musicians.”

“Our influences include Paramore, Imagine Dragons, Twenty-One Pilots, Halsey, and Taylor Swift just to name a few. Growing up listening to these artists and seeing them in action, really inspired us to reach for our dreams.” The four continue on their reflection, “We are so grateful for their music and the impact they’ve had on our lives. Honestly, as a band, we hope that we can do the same for the generation of musicians that come after us.”

Finally, the girls close out with the definitive statement that was already evident in their music and the way they carry themselves, but still is exciting to hear: “We really want to be a positive force in the world.”

“Can’t Get Out of Bed” is available on all streaming platforms and wherever you buy music.

With the series finale just days away, the Nickelodeon starlit reflects on “School of Rock”, her character, and what will come next.