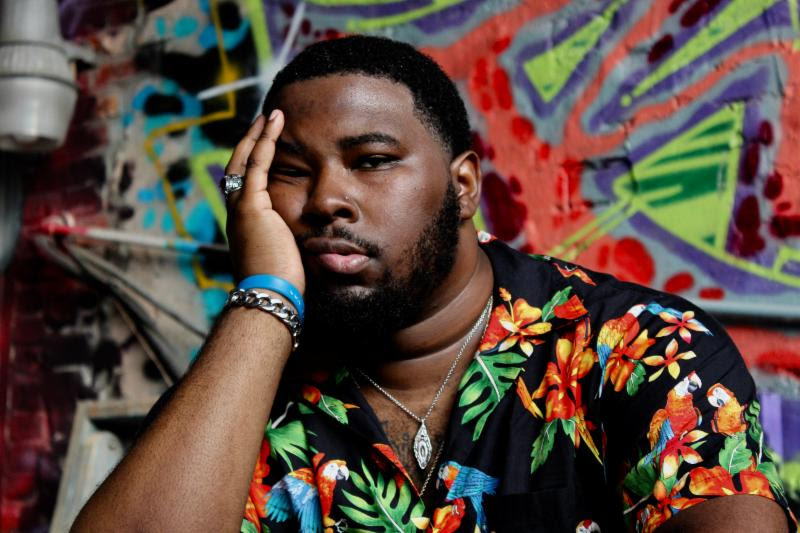 Better known as PlvXid (pronounced Placid), Craig Vincent Jr. is a rapper and record producer from Chesapeake, VA. If you look at his twitter, he tells you, “You can’t control the waves, but you can learn how to swim.” When you read his bio on Soundcloud, he exclaims, “Peace, love, and create!” This sentiment is also advertised on his merch. It’s also throughout his music, although not so direct.

Rapping since the age of 12, Craig carried a love for music since before then. As the 24-year-old mentions later in our interview, however, it wasn’t until his senior year of high school when he made it into the yearbook that he started taking it more seriously. Since then, he’s made music as a group with his friend Ryan Luc and ventured off into making solo music in 2016. In college, Craig took the leap even further using a refund check to pay for a noname feature on his viral single “Found My Flow” and then getting a feature with Raz Fresco on “Presence.”

But before reaching those points, he released his debut track, “Le Capricorn 1.5.” “I’m very motivated when I’m assigned a task, I don’t like defeat at all so I make sure I stick to something no matter how long it takes,” Craig says when we discuss Capricorn qualities. “As far as a trait I don’t have, a lot of people tell me that Caps are jerks and are stuck up, I think that’s the complete opposite of me, I’m a sweetheart,” he laughs.

PlvXid’s latest project is EAST$IDE, made up of 12-tracks, the record is full of heart and reflection as he aims to put both him and the VA music scene on the map. “EAST$IDE is basically my first real introductory project, it’s a chance for people who don’t know me personally to see what actually goes on. It’s themed around my surroundings growing up in VA but also making a statement,” he explains. “I feel like when people speak or think of the East coast at least in a music aspect, they immediately go to NY or Jersey. Nobody really ever considers VA, and this album is basically showing them what we have here!”

When it comes to the VA music scene, Craig describes it as versatile. “That word seems to stick with me whenever I’m creating anything with music,” he says. That ability to adapt and show layers that the VA music scene holds, he shares, is why he wants to approach his creative process differently each time; to avoid being boxed into one label or concept.

I need to actually talk on this album to let people know I do more than just hard songs or nice singles, I need to make a real body of work.

The production of the project carries that kind of variety throughout the songs, interlude, intro, and outro being able to go from upbeat almost garage house-esque to soulful in an instant while still being cohesive. “The whole prelude was what the album was originally going to be before I had a shift and was like, ‘Nah, I need to actually talk on this album to let people know I do more than just hard songs or nice singles, I need to make a real body of work,'” he says about what’s changed since the start of working on this. “My thought process changed quite a few times with this project and that’s why it took so long.”

His first song to get listeners ready for this era of his artistry was “Breathe.” With a beat and flow reminiscent of the 90s or even “Kick, Push” from Lupe Fiasco, the song talks about taking in the good vibes, taking time, and breathing when it doesn’t seem like the world is willing to offer those kinds of luxuries. “‘Breathe’ is honestly one of the most open songs I’ve made, I took my time to make sure every word resonated when recording that single,” he starts when I ask him about using that song to kick off promo for this project.

“I’m usually pretty efficient when I go to the studio, I can knock out about 2 or 3 songs in an hour slot because I spend a lot of time rehearsing the verses and we all know that time is money when it comes to the studio. But with this song, it was something different, I would listen to it back in the headphones and tell my engineer, ‘Nah, run it back, I gotta make them feel me on this one, I can do it better, harder, stronger.’ The whole process was just different and I knew it was meant to be the single.”

Talking style and technique, he mentions that because he approaches creating differently depending on what’s being made, he hasn’t figured out a definitive style. “I can’t lock myself in to say, ‘Okay, you know the routine, first we do this, then this, then this.’ I have to go off of what I’m feeling at the time and moment,” he says.

His inspiration also spawns this. When I ask him about any other music genres that appeal to him, he talks about his love of “flips” when a producer takes popular songs, strip the vocals, and make a different beat around them. “My goal is to have one of my favorite producers, who I actually heard my first flip from (j. robb) use one of my songs for a flip.” He then goes on to mention his appreciation for oldies and rock music as well.

“I’ve been around music for a long time, my dad is a part-time DJ and my mom is a chef that loves to listen to her oldies as she cooks,” he explains. “Basically growing up I was a pretty shy and humble kid who didn’t really talk much, but after I discovered my ability to tie words together and write songs, I kind of used that as my way to communicate.” The decision to gear towards rap came of course from being a fan, but also its ability to communicate and be a bridge for relatability.

“After me and my friend got put in our yearbook off of playful raps, I knew it was time to do something with it.” People then started to discover him through rapping and asking him about his opinions in music. “On top of that, my taste in music grew as I discovered more artists who weren’t all talking about the same thing and who were using different styles. I was like, ‘Oh, okay, I can see myself in this artist.'”

That’s how I look at life: don’t be scared to try new things because you never know where it could take you.

That’s also something he hopes to explore in his music. “I think the biggest misconception is that you have to have some sort of backstory or traumatic experience for people to gravitate towards you,” he says when I ask him about misconceptions regarding rap and hip hop. The genre isn’t a monolithic culture and its ability to branch out in these ways and redefine creativity and what music can be about has greatly contributed to rap and hip hops sustainability in the industry and culture.

When it comes to his music in specific, Craig has found it to be integral to his everyday life. I shout out one of his earlier songs, “Unfinished (Interlude)” with the lyrics, “My states for the lovers but there’s mostly hate here. But still, I persevere. Bounce back with a quickness…” and ask him how art has helped him.

He responds saying that art/music has kept him sane. “I use music to take me away from everything, whether it’s listening to my friend’s new stuff, listening to beats, or just writing what I feel at the moment. I don’t think there isn’t a time or place where I’m not listening to music at least once during the day. It’s a part of my everyday life,” he reflects.

For the lyric of his that he’d consider autobiographical, he cites, “I think I reached my peak and I’m about to jump off, but not fearing of where I would go, cause I know the vibes will carry until I finally find my flow, I think I found my flow…”

“Honestly, I feel like that’s what life is all about, no one just randomly wakes up and knows their purpose, you gotta live a little and go through things before finding out what it is you are here to do and what your passion is,” he explains the lyric. “That’s how I look at life: don’t be scared to try new things because you never know where it could take you.”

He expresses gratitude to the friends and family that have shown support for him through attending shows, buying merch, being vocal about what they think of his work and also those in his life who don’t associate themselves with the music side. “That drives me to make something that they’ll notice but also that the ones who support would appreciate,” he looks on the positive side.

His music has also found reach across the seas in the UK and Japan so the support goes farther than state lines. While he admits to not being sure what it is about his music that gives it that appeal, he suggests maybe it’s that honesty that acts as a bridge. “I always tend to keep it real in the lyrics when I write and I think they can feel that.”

‘EASTSIDE’ is available wherever you stream or download music.