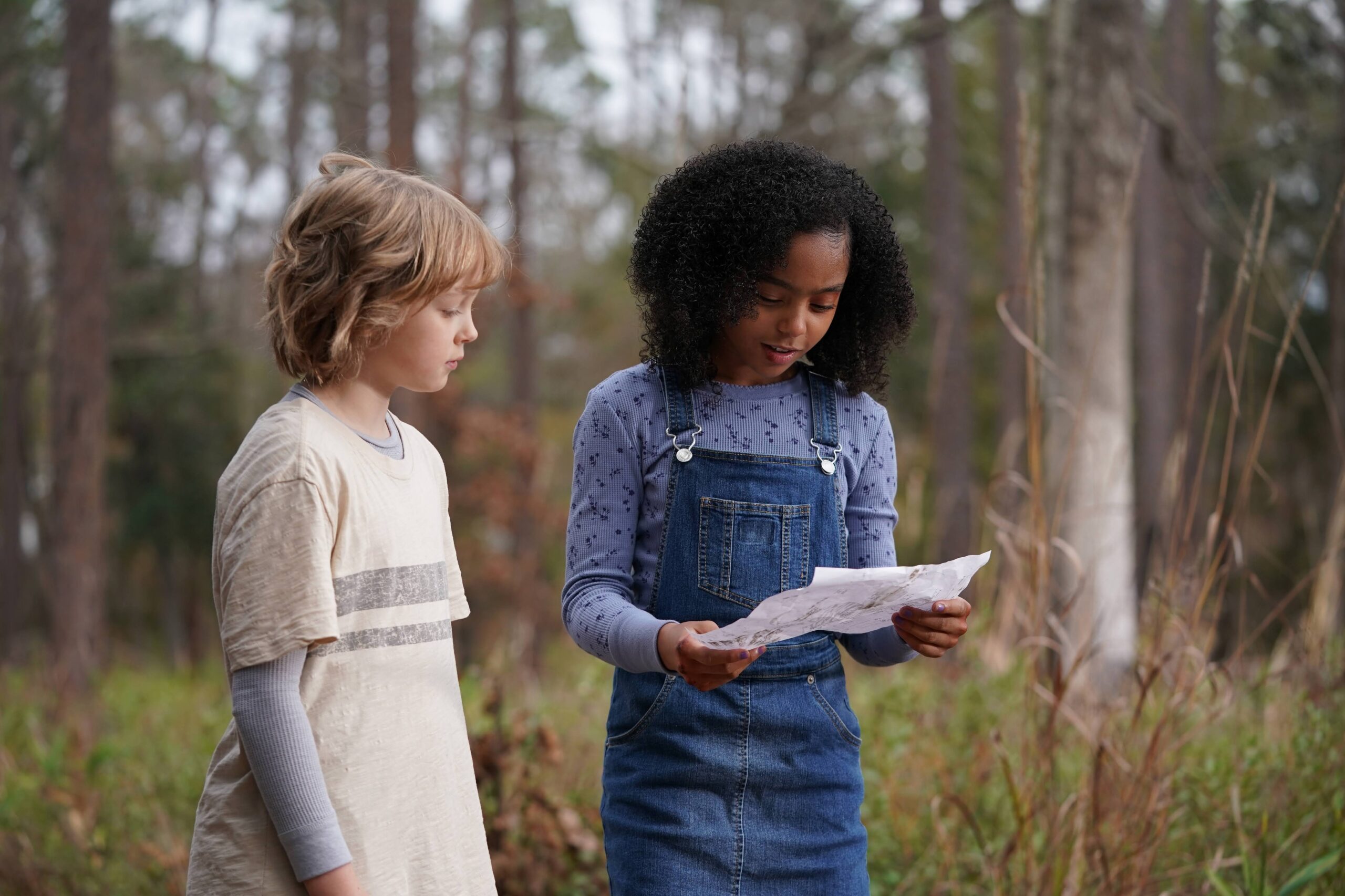 It’s said in Hollywood that when it comes to projects, you shouldn’t work with animals and you shouldn’t work with young actors. The ethical nature of this rule is one to be questioned given that both groups also have set restraints that adult actors don’t and therefore require a certain kind of patience and navigation while filming.

In projects such as The Tiger Rising, however, working with both groups was essentially unavoidable. Starring Christian Convery (Sweet Tooth) and Madalen Mills (Jingle Jangle) alongside Queen Latifah and Dennis Quaid, the story follows a grieving 12-year-old Rob Horton who discovers a caged tiger in the woods near his home. “Christian and Madalen are incredibly talented actors and for the most part, I talked to them and worked with them as I would with adult actors–they are that mature as actors–both incredibly gifted,” director/writer Ray Giarratana says noting that to work with both kids and animals for his first feature may seem outlandish on the outside but the casting was key to it working in his favor. “As far as working with a 350-pound tiger, I worked with the absolute best trainer in the business. I actually contacted him about 10 years ago when I first wrote the script and we went over every scene in the film and talked about the best way to accomplish what I was hoping for. The secret to working with a tiger? Listen to his trainer. Period.”

As a film, The Tiger Rising tells its story through both vivid fantasy and humbling reality. Rob is struggling to cope with the loss of his mother (Katherine McPhee) and adjusting to living in a hotel now with his dad (Sam Trammell) while his only friends are the hotel housekeeper Willie Mae (Queen Latifah) and the new girl at school Sistine who’s acting out because of her parent’s divorce. For Rob, it becomes easiest to resort to his imagination than deal with real life.

All of Rob’s imagination moments, while sophisticated, still had a level of simplicity that Rob might imagine.

“We tried to make the film come from Rob’s point of view as much as possible…the way he sees the world. Beauchamp is a little bit larger than life–the way a 10-year-old might see a guy like him. All of Rob’s imagination moments, while sophisticated, still had a level of simplicity that Rob might imagine,” Ray says. “Having written the script 10 years ago, it was easy to think of myself as the writer for all those years, but I always would think of how I would film it eventually. I tried to write the script in a way that the readers could almost see my shots without actually calling them out specifically. But once you’re on set as the director, it’s your responsibility to make sure that everything works, including the script.”

Before this, Ray’s credits included working as a concert sound engineer, programming video games, visual effects, and animation–elements that are all essentially utilized in the project. When I ask him about this, he shares that he’s thrilled that he got to create such a human story through this project given his background. “There are so many delicate layers to Kate DiCamillo’s wonderful book that we worked very hard to craft onto the screen. It’s important to me to be a well-rounded filmmaker, not just a guy that can make sophisticated visuals but also bring challenging characters and emotions to the screen.”

To his point, when Rob and Sistine discover the tiger, it essentially becomes a symbol of freedom from circumstances. Sistine immediately sees the tiger and demands they find a way to release the tiger from the cage, promising that she’ll come back for them and open the cage when the two find the key–a parallel to the fact that she’s waiting for her dad to come back and free her from this new environment and the rocky relationship she has with her mom since the divorce and move. Meanwhile, Rob’s view of the tiger being caged is a little more permanent. He agrees the tiger should be free, but he doesn’t know how to go about it–seeing the tiger’s caging instead as something they might be stuck with–and being afraid of what would happen if they freed them.

“Dealing with grief and loss is a universal story. Adults and children go through these tough times, but children may not know the best way to deal with those feelings,” Ray starts when I ask him about storytellers often exploring grief and loss through the lens of youth. “That’s very evident with Rob and Sistine. While Rob pushes his feelings deep inside and tries to shut out the world, Sistine lashes out angrily. That doesn’t make her a ‘bad kid,’ it just means she handles tough emotions differently than Rob.”

It’s important to me to be a well-rounded filmmaker, not just a guy that can make sophisticated visuals but also bring challenging characters and emotions to the screen.

“I remember thinking when I was writing that whoever plays Sistine is going to have a good time,” Rob continues later when I ask about what he was most excited about filming when writing. “Her character seemed like it would be fun for an actor and I think Madalen would agree. I remember thinking that all the scenes with Rob and Willie May in the laundry room would be the heart of the film.” In terms of difficulty, Ray says the dynamic between Rob and his dad, Robert Sr., was a tough needle to thread. “The wonderfully talented Sam Trammell and I had several discussions about how that character is hurting just as much as his son. He’s lost the love of his life and he’s having a hard time connecting with his son. It was important to show his pain but make sure he didn’t slip into looking like a bad father.”

Rounding out his dream cast was Queen Latifah who he says he envisioned for Willie May since he originally wrote the script. “Willie May is the heart and soul of the film and I knew that Queen Latifah would bring a level of honesty and humanity to the film that would make it real.” And Dennis Quaid supports in a heel turn as Beauchamp. “Dennis Quaid has starred in many family films over the years and he usually plays the guy with the heart of gold, the all-American guy. But Dennis has a huge range as an actor and I thought he’d have fun playing Beauchamp, ‘the villain’ in this film, and he did.” Ray recalls that when the two would pass each other on set, Dennis would smile at him and exclaim how much he loved playing the character.

“Discussions with all the actors always start with questions like, ‘Who is this person? Where did they come from? How did they get here?’ Once you start with a basic understanding of the character, all of these talented actors brought so much of their artistry to the role,” he says.

[Kate DiCamillo] chose to tell a story of hurt, loss, and hope through the eyes of an imaginative child, but those same concepts apply to us as adults as well.

Before this Ray had been writing scripts in the comedy realm before his agent reached out to him about adapting Kate DiCamillo’s book. He read the book and fell in love with the story noting that for his first draft, he found himself sticking very close to the book. “I wanted to start with Kate’s wonderful story and not change everything haphazardly. I remember thinking that it was close, but it wasn’t finished.” Ray relied on the thoughts of his wife/partner Deborah and Kate agent Jason Dravis. “We all agreed that because the story deals with such heavy emotions, it might be a good idea to give the viewer some emotional rest–to give the film some more contrast so the highs could be higher and the lows a little lower.”

The medium then became Ray going back over the script and adding some comedic moments. “Nothing crazy,” he says, “but just a few moments here and there. I tried to read in-between the lines of Kate’s story and look for places where there could be something lighter in the situation. After that, the script felt more complete as a film.”

This isn’t the first time a Kate DiCamillo book has been adapted to the screen. Out of her 25 books, 5 have been adapted to screen, most notably, The Tales of Despereaux and Because of Winn Dixie. “I was truly blessed that an author of the caliber of Kate DiCamillo allowed me to run with her wonderful book. In the case of The Tiger Rising, Kate wrote a seemingly simple story, but with so many layers of emotions throughout,” Ray explains. “She chose to tell a story of hurt, loss, and hope through the eyes of an imaginative child, but those same concepts apply to us as adults as well.” Closing out, Ray adds, “I feel honored to have been given the opportunity to make Tiger a cinematic experience.”

You can stay up to date on all things Ray Giarratana by following his Twitter and Instagram accounts.

The Tiger Rising is now available on Video on Demand.

Stepping into a role someone else originated is no easy feat. It happens often, with transitions from animation to live action, and even in…