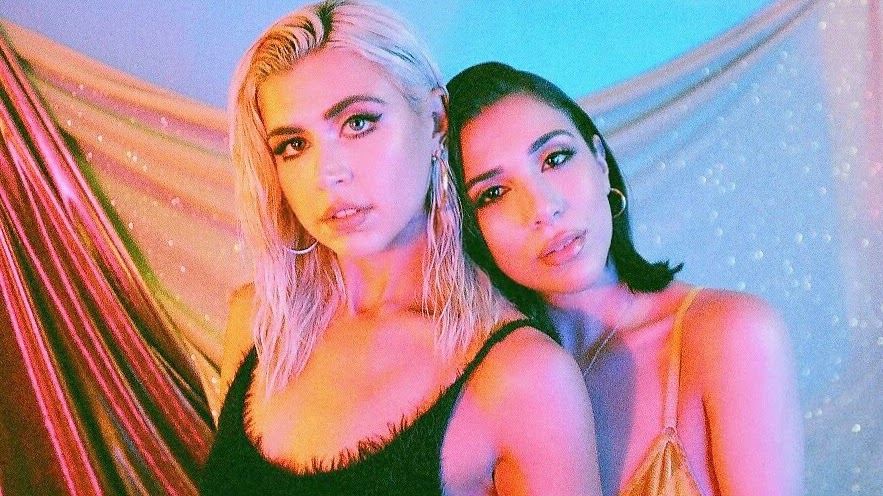 One of the joys regarding music is the ability to create the soundtrack of your own personal rebellion. The songs you listen to can define what you’re for, what you’re against, what you’re feeling, and how/if you feel seen. As a result, people who make music tend to draw on their own personal experiences and relationships to make what they’re offering more relatable and also make themselves or others feel less alone. Sometimes this means just sharing vulnerable emotions, other times this means speaking about “taboo” things that are deemed “impolite” to say or express to promote shame. And the both of these things can intersect and expand.

When it comes to Jessica and Melissa Labbadia the chicken and the egg of their relationship timeline-wise is obviously that they were sisters first and then a music duo, but where they are now, the two parts of their relationship are cohesive, feeding off one another as they create their own joint rebellion.

“We started writing/recording when we were 12 and 15, so we have been through a few incarnations and rebrandings since we first formed our duo,” the girls talk about their rebranding including from their previous name as L2. “As we grow as artists and as individuals, we never want to limit ourselves creatively to fit a certain sound or mold. That’s actually how RUUMER came about… we were in the studio working with writers/producers SmarterChild and Mike Miller (whom we collaborated with on most of our project), we were kind of hibernating in the studio for a week or so creating a batch of songs.”

Working on those new songs, the girls felt something special and true to them as they describe it that also showed growth and a difference from what they made before. “We didn’t feel like we could call it the same thing,” they say. “So we decided to rebrand as RUUMER. At this point, we truly feel like this is the music we’ve always wanted to create and put out into the world.”

In respect to that, the two admit that one of the goals in their music is empowering women with what they deliver. “When we were growing up we were obsessed with pop music icons like Britney Spears and Christina Aguilera. They both helped us feel very empowered when we were young girls. You had Britney who was such a superstar, really the first pop star of our generation. And then you had Christina who had this powerhouse voice,” they praise the two as their inspiration.

“Now more than ever we think it’s a vital time in our society to use your voice to empower people in some way. There are so many killer artists promoting feminism, which is amazing.” On the discussion of making “empowerment and statement pop”  the two share what they want to bring to the table: “We hope our music contributes to that movement to empower women to be unapologetically themselves.”

We hope our music contributes to that movement to empower women to be unapologetically themselves.

Their latest single “Gimme Some” which came out a month ago is a perfect example. Made as a response to the stigma and shame revolving girls understanding and learning about their sexuality that Jess and Melis received in Catholic School, “Gimme Some” works to take back the agency that the two felt like they had snatched away from them. “We’ve always talked about how growing up going to Catholic School really affected us and our sexuality. Honestly, until we hit our 20s, we always felt kind of embarrassed to talk about sex. Through our music and creativity, we were able to come into our own and finally feel comfortable with our sexuality and our bodies.” Having these repeated conversations led to the two wanting to make a song inspired about these experiences. “‘Gimme Some’ is all about empowering women’s sexuality. We wanted to create a theme of juxtaposition…the song has a choir inspired beat but we’re being playful through the lyrics, praying to God to ‘get some’ tonight. The record is essentially a satire on the sexually oppressing environment of our youth.”

“We wanted to throw a wrench in the stigma that women should be ashamed to talk about our desires,” they add. “We never really played on our sexual sides as part of our art. We always kept it somewhat ‘PG’ to not ‘give the wrong impression’ but stepped back and thought…why do we have to be sexualized? Why does showing our bodies we have grown to love mean we are asking for someone to objectify us?” The two pose the question when discussing displaying womanhood through sexuality for women as opposed to for cishet men/boys to consume and objectify. They mention that if anyone watches their work, Jessica and Melissa hope they walk away feeling liberated, unashamed and accepting of oneself.

“We are comfortable with our womanhood. We should be allowed to wear whatever we want that makes us feel good without judgment or assumption that it is for anyone but ourselves,” the two declare. Discussing the vision for the video and how this shows, they give a shoutout to MK Schneider who directed the video. “There are competing visuals of women being traditionally feminine and the new age confidence in being who you are no matter how you look, no matter what you like,” they explain. “It embraces all angles of the modern woman and shatters the stereotypes that they are given.”

Along with the competing visuals and use of angles, the video also plays around with color and hue. The two wanted the music video to have a neon aesthetic with retro vibes to fit their overall aesthetic regarding photos and videos, “For the video, we wanted to create this underground girl gang club vibe, so we thought incorporating the neon would really give it that feminine but edgy feel.”

The underground girl gang club vibe on camera was also there off camera. Shooting in a warehouse/artist compound in Brooklyn with the other girls proved to be a party on set including a few party crashers. “There were some artists living in this space, so this couple snuck on set and went into the bathroom we were using to shoot some of the scenes. They wouldn’t come out!! They were in there for a good while. We had to keep banging on the door until they finally came out! It was super weird…” they share an on-set story.

We are comfortable with our womanhood. We should be allowed to wear whatever we want that makes us feel good without judgment or assumption that it is for anyone but ourselves.

Moving on to RUUMER’s upcoming music, the band has at least two more singles releasing soon as well as a new record titled Downtown. “We actually just shot the music video for the record a few weeks ago,” they share. “The shots we saw so far look sick, so we’re pumped about that as well.” Aside from the new music coming out, they also have shows scheduled in NYC and LA with dates to be announced.

They don’t share much about what we could expect in terms of the sound of their upcoming music, but their message remains clear, “We just want to make music that empowers people to be the truest expression of themselves. Like art, we always want our songs to be open for interpretation as well.” This shows even in their choice for their most autobiographical lyric which comes from an old song of theirs, “House of Cards.” The lyric goes, “Talk is cheap, but the love is free.” The two explain the lyric, “People will promise you the world, but actions speak louder than words. Love, however, is a universal language, love is free. That really resonates with us and our lives.”

Love, acceptance, and empowerment run through their music and their approach thematically, meanwhile the girls also share that their musical theatre background has helped creatively. “There’s a certain creative process we have, we like to visualize everything as a whole. When we’re writing a song we see the whole picture; the visuals, the music video, the pictures that accompany the song. Acting and theatre have definitely helped us with creating a vision for RUUMER,” they explain adding that being classically trained vocalists also makes performing live something they love.

“We would definitely return to musical theatre to do WICKED! We’ve always dreamed of being in that show on Broadway as Elphaba and Glinda,” they answer when I ask about if there are any dream roles they’d love to do. “We probably saw it ten times or more when it first came out,” they laugh. “We also love the classics like West Side Story. A movie musical would be a dream!”

We thrive off of one another and work the best when we’re together.

Jess and Melis have also taken other aspects of their life and applied it to their work, giving credit to their dad for giving them the best advice they’ve ever received when he told them if at first you don’t succeed, try and try again. “In our industry, there’s a lot of rejection. You really have to have thick skin and keep your head up to keep on going. When we get a little discouraged we just think of him telling us that when we were little girls,” the two explain the advice.

“The worst advice we’ve received was probably when people told us we had to be a certain way to, ‘make it.’ That we had to have a gimmick. There’s no right or wrong way to do things, you have to do what works best for you,” they share the worst advice they’ve received. “Especially in the music industry, there’s no set formula.” They pause before adding, “Music is very subjective.”

Being sisters and working together collaboratively, it works out well that they’re pretty much two sides of the same coin and therefore can work in sync with each other. “Jess is super creative and musically inclined. She loves working on that side of our project. She has a great ear, so we always have her listen to the mixes very closely and she’s very hands-on with our producers regarding our sound,” they explain. “Melis is more on the lyrics and melody side when it comes to our music. She’s also very business oriented and handles a lot of our creative direction, styling, etc. We both bring something different to the table, so it’s a really great chemistry.”

The two conclude, “We thrive off of one another and work the best when we’re together.”

Teenplicity: If you could create a mini playlist for readers of this interview, what songs would go on it?
RUUMER: We actually just created a Girl Gang vibes playlist on Spotify. It’s filled with songs by killer female artists that we love like Lady Gaga, Halsey, Dua Lipa, Hayley Kiyoko, and Lennon Stella. It’s all about female empowerment!

RUUMER’s latest single, ‘Gimme Some’ is currently available on all platforms.

Stay on the lookout for RUUMER’s guest article for Teenplicity coming soon!