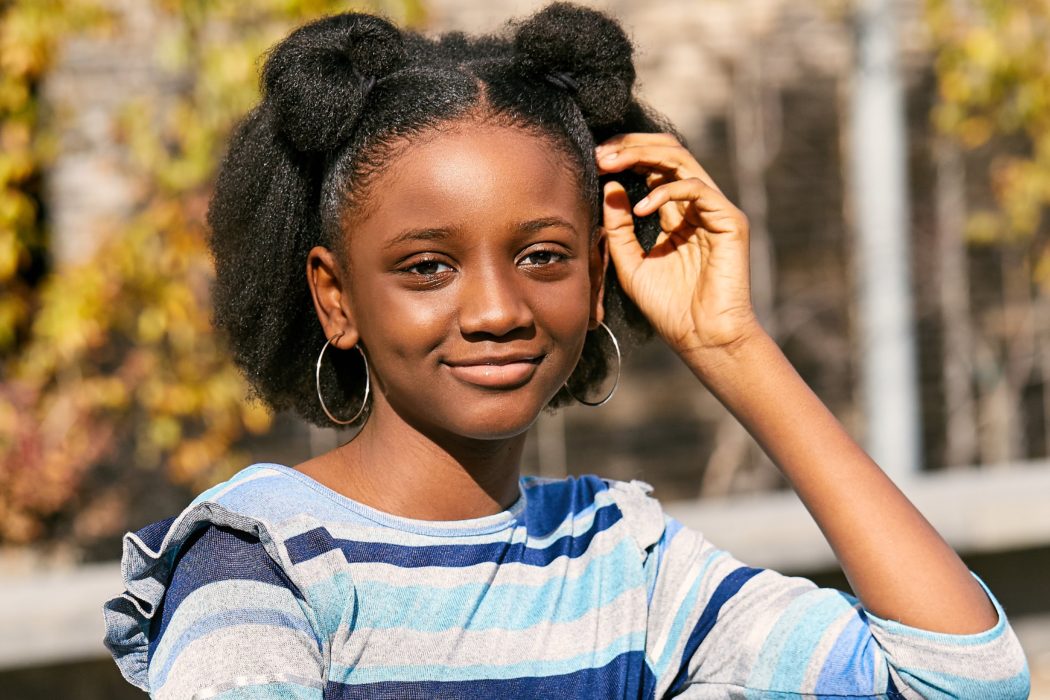 If you want an example of range, you can look at Aria Brooks. It’s possible, actually, that perhaps you already have, at least once. She played Nola in Dolly Parton’s anthology series Heartstrings on Netflix. Then, she played the role of Anger in the Harriet Tubman biopic Harriet. Now, she’s a cast member on the revival of All That.

“Zendaya was one of the main people that made me realize I wanted to perform. She sings, dances, and acts. I wanted to be well balanced across the board like her. She is so great at what she does and she had a similar start to mine, so I know I can do it too,” she answers when I ask her if there was a performer that made her realize she could be a performer.

With both of her parents being performing arts educators, Aria fell in love with singing and acting when she was six while learning music and musical theater from her mom and shares that along with Zendaya, she looks up to Taraji P. Henson, Melanie Martinez, and Amandla Stenberg.

While she learned from Zendaya how she could be an artist with no limits, when I ask her if there’s any character that she’d love to go back in time and play, she gives a shoutout to Skai Jackson’s character Zuri on Jessie. “I LOVE that show,” she exclaims, “and I always used to imagine what choices I would make if it were me.”

[Zendaya] is so great at what she does and she had a similar start to mine, so I know I can do it too.

Aria’s start with All That began with a self-tape. After that, she did a callback and a screen test before getting on the show, a process that she describes as being surprisingly short. She also shares that one of her audition characters made it on the show, but since the episode hasn’t aired yet, she couldn’t share further than that.

She does, however, say that her favorite character she plays is her first continuous character, Eureekah the Slightly Off Psychic: a character that she gives credit to the hair, makeup, and wardrobe departments for helping create the look to enhance.

Aria also mentions that the cast is constantly pitching ideas to the writer’s room. “Since our show doesn’t have one storyline, our writers love to use our ideas. Some of our sketches are from our auditions and others are ones we just thought of.”

The revival brings back familiar names from the original show with Brian Robbins, the show’s co-creator being named president of Nickelodeon in 2018 and announcing interest in a revival shortly after. Kenan Thompson and Kel Mitchell both serve as executive producers now and Kel along with Lori Beth Denberg and Josh Server have all made consistent appearances. Writing and producing duo Kevin Kopelow (who folks may remember as Kevin the frantic stage manager just attempting to do his best at the beginning of every episode) and Heath Seifert who both worked on the series in the 90s have also returned.

So besides the writers, the cast also has the original team on their side. “I haven’t met Kenan yet, but Kel’s work ethic is impeccable. He jokes with us, but still sets a good example,” Aria explains about her experience with them. “He was in our shoes at one point, so it’s comforting to work with someone who knows your struggles before you do.”

“I want to please the ’90s viewers and new viewers. I try my best to make it funny for everyone,” Aria explains about being a part of the All That legacy. “The most fulfilling thing has been to see that all of my hard work paid off. The journey has been long and tough, but the end result has been worth it.”

Gaining the role as a series regular, Aria has already received positive responses. “I have had a lot of people tell me that they are happy their daughters have a role model to look up to. My goal is to allow girls of color to play any role, it doesn’t just have to be sassy. A lot of mothers have reached out and told me that I helped their daughters,” she shares.

If nothing else, I want young women to know that, after everything that was thrown at me, I made it.

“I hope to show kids that they are capable of anything. I want girls to know that they are beautiful, and they can do it,” she starts when I ask her about being on Nickelodeon and getting to impact other young folks watching her. “If nothing else,” she continues, “I want young women to know that, after everything that was thrown at me, I made it.”

Working in improv and comedy, Aria’s really gotten the opportunity to put her skills to use and learn new ones. “The most important things I’ve learned have been how to cover up my mistakes and think quickly on my feet. Nobody knows you made a mistake until you show them that you did. I am way better at covering up my mistakes and continuing the scenes,” she explains how she’s grown as a performer.

She’s also put her comedic (and dancing) energy into TikTok, something she says the All That team is keyed into. “Our writers are very hip to those things, so a lot of our comedy is based on that. It makes the show really interesting and funny when we make jokes about modern-day things,” she responds to the way in which the digital age has influenced not only her and her cast, but also the reinvention of the show.

“There are several aspects to comedy. Execution of the comedy is a lot of what makes it funny,” Aria explains. “I feel like Gen Z is bringing relatability. When you can relate to something, it is funny.”

Aria proves a triple threat on the come up as she’s also working on music at the moment. When it comes to songwriting, she gives credit to Melanie Martinez, Tate McRae, and her mom as inspirations. “I want to be known not only for great vocals, but also great lyrics. They are my inspirations because they all write music really well,” she explains.  “There are no guaranteed acting projects (coming up), but I would like to release new music. I want to release an album about self-love.”

You can stay up to date on all things Aria Brooks by following her Twitter, Instagram, and TikTok accounts.

Heather Braverman’s EP is a Diamond in the Dirt

New Jersey native Heather Braverman is making waves in the music scene. Her music is described as a mix between R&B, pop, electronic, &…