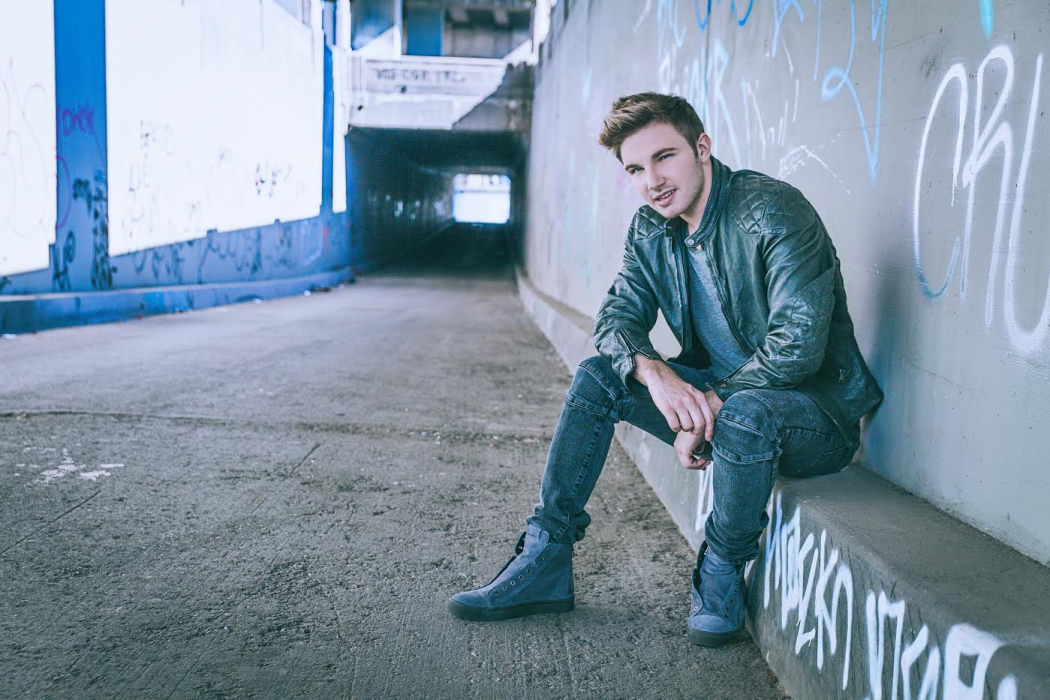 When you watch 18-year-old AJ’s latest music video, “Tongue,” you’re first met with a screen of televisions and the words, “This is a story of broken promises” scribbled at the top. That’s only one of the few messages that show in this innovative, virtual reality music video that allows watchers to interact by moving through the music video and seeing different stories.

“My favorite part of creating and conceptualizing the music video for ‘Tongue’ was that since we were filming in virtual reality, we felt like we could try and experiment with anything because we had no idea what was going to work and what wouldn’t work,” AJ explained as he said that shooting “Tongue” was the first time anyone involved had ever shot using the method of virtual reality before.

Coming up with the idea to create a video in virtual reality, AJ says, comes out the complexity of the subject the song was about, “I felt as if there are so many different situations that people deal with, so I wanted more than just my story to be portrayed.” With the help of Chloe Lukasiak, Twan Kuyper, and Tessa Brooks who all star in the video, he exclaimed that he felt so lucky they were willing to share their own experiences of empty promises.

“Working with Chloe was an incredible opportunity,” AJ responded when I asked him the fan question regarding working with the Dance Moms alum. “She may be young, but she is so intelligent, creative, and extremely hard-working,” he assures. “And I am so lucky to be able to call her a friend now. She deserves all of the amazing success she receives!”

However, the group was met with technical challenges as well when working on the music video. AJ explained that it was important to them that the video is accessible on all platforms in the 360 format that they intended. “It is such a new technology that it doesn’t work on some people’s devices,” AJ said about the realization they had working on the accessibility. “But we’ve come to understand that it is ok and that it is still awesome to be the pioneers of something, even if it’s still at a very incipient stage!”

The theme of, “Tongue,” stems out of broken promises, but more specifically, AJ shared that the broken promise(s) that inspired him to write the song came out of a need for self-assurance and understanding, “The line at the beginning of the chorus, ‘Am I slipping off the tip of your tongue,’ was based on people at the beginning of my career saying they were going to help me and then never really following through with their promises. So, I wanted to write a song that could help me move past relying on other people, and trust in myself more.”

If you listen to more of AJ’s songs, you notice that kind of vibe; the different kinds of connections people can hold be that with each other or with themselves. “I do try to write all of my songs with a connection between people, even if it is just a double meaning for something else,” he responded when I asked if the stories in his songs come more so from experience or observation. “A lot of my songs are about personal experiences, but some are also based on things my friends are going through, especially if one of them can’t stop venting about something,” AJ laughed.

For AJ, it seems that his music is a strong reflection of his journey coming in terms to understanding who he is as an artist. “Coming up with my sound was something that took a lot of trial and error for me. When I was younger, I made a lot of bubblegum pop music because I was a lot younger and I thought that’s what I needed to sound like for people to like me,” he began about how he picked the sound that he has now. “But as I’ve gotten older, I’ve realized it’s more about what I like about myself that matters. I started to think about what has truly influenced me and that has been a mixture of singer-songwriter music from people like Ed Sheeran and Jason Mraz mixed with rhythmic elements of people like Michael Jackson or Justin Timberlake, which is why I call my music, ‘Urban Acoustic’.”

Finding the right sound was, and still is, something incredibly important to AJ because making that decision, to be honest with himself helped him stay true to who he was/is, “The most important part to me about making music is to really stay true to myself and not try to write something focusing only on what I think people would think of it. The more time I spend really digging to make it something that I am proud of, the more I’ve realized other people enjoy it in the long term.”

With new music coming out very soon, he hopes, it’s hard not to be excited about where his new music takes him.

More recently, AJ opened for acapella group Penatonix on their world tour where he said the best part was meeting so many amazing people and seeing so many different locations.

He’s also been busy working as a Teen Ambassador with DoSomething and working with the Ryan Seacrest Foundation and Big Brother, Big Sister Organization to make a difference. “I am so thankful that I get to work with such amazing organizations like the ones listed above,” he says when asked how taking part in what these organizations do has helped him put his life and platform into perspective. “And I am so lucky that I have music as a platform to travel the world and spread messages of self-love and confidence and that is something that drives me everyday.”

AJ also starred alongside Austin & Ally star and singer/songwriter of “Boombox” and “La La”, Laura Marano, in her music video for the Nickelodeon show Miraculous Ladybug. “Working with Laura was such an amazing experience,” AJ exclaimed. “She is so professional and so caring, and I am thankful I got the chance to spend time with her and learn from her!”

Seeing the way Laura carried herself on set, AJ shares, was something that stood out to him and he took from her, “She was so sweet to everyone on set and I saw how much that meant to everyone. Especially since the shoot was from like, midnight to 7AM. It was great to see how much she cared to say ‘Hi’ to everyone and made sure everyone on set felt comfortable.”

“I think when I was Simba in The Lion King at camp and I said, ‘I’m going to be a mighty king like no king was before,’ I really meant, ‘I’m gonna be a performer,'” AJ laughs talking about when he realized he wanted to be a performer. “Though, I feel like the more and more I kept performing the more I realized how amazing it is to be able to perform and make some people’s days even if it’s just by singing a song they like!”

The fact that being an artist helps so many people is what inspires AJ to continue making art. “I love being able to travel the world and put a smile on people’s faces,” he says, further showing how he connects to people. “When people come up to me after a show and tell me that my music has helped them or have made them happy in any way, I go home right after and write another song that will hopefully do the same!”

Preparing to close out our interview, I asked AJ a fan question asking if he’d offer advice to young, aspiring singers which he shared, “I’d say to remember to stay true to who you are and what makes you unique. That is something I really wish I followed when I was younger, and I think that that would have saved me a few years.”

Before finishing the interview, with so many fan questions unanswered, I asked AJ if there was anything he’d want to leave with: “I am so grateful for the support from AJammers all across the world every day and I hope I get to go on tour soon to give everyone a hug and share some new music!”

“Tongue” is available for purchase on iTunes and the music video is current available to watch on Youtube.