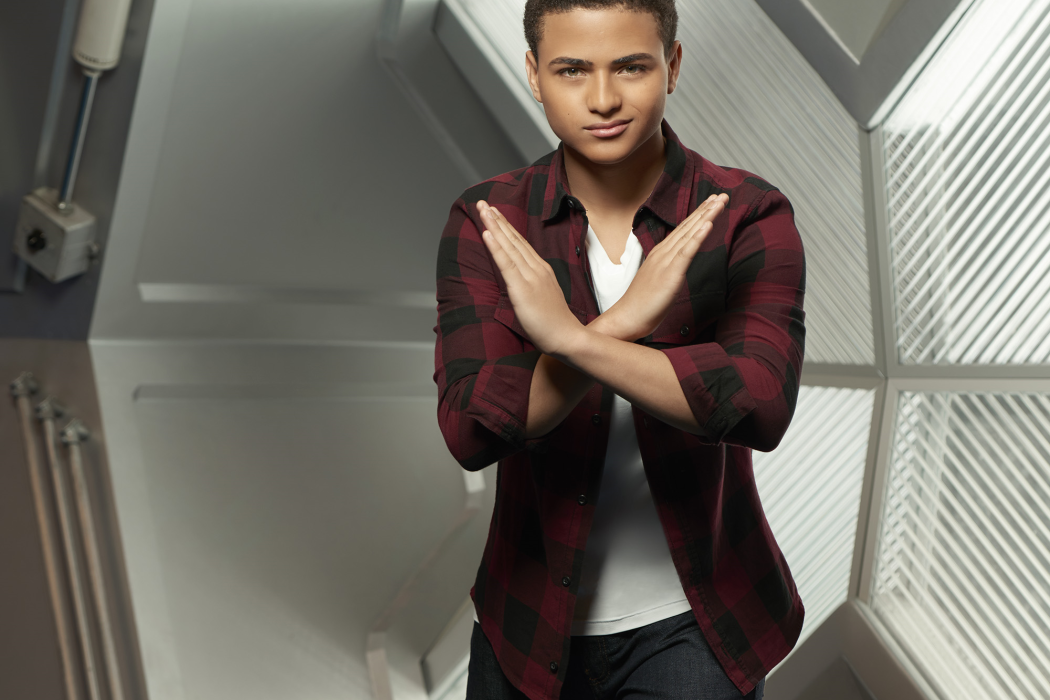 With every superhero, there is a man or woman behind the mask. Ryan Walker, portrayed by Nathaniel J. Potvin, is just that person in the case of Disney XD’s “MECH-X4”.

After the discovery of his technopathy powers, Ryan believes the robot that has suddenly appeared in his life, MECH-X4, was made for him. Throughout the first season, according to Nathaniel, Ryan fights monsters and grows as a person, learning what it means to actually be a hero throughout all the chaos.

“My character, Ryan Walker,” the young actor begins, a tinge of pride electrifying his voice as he says his character’s name. “When he learns he has superpowers, he finds this robot [and] he recruits his two best friends – and he recruits his brother which takes a lot of humbleness from the character.” Nathaniel explains how the three help his character mentally with this new aspect of life they’ve been thrust into.

One of the most notable relationships on the show is that of Ryan and his older brother Mark [Raymond Cham Jr.]. The two start off the show at odds with each other, Mark being the star athlete who teases his brother, and Ryan just trying survive school. They even pull a few pranks on each other in the beginning.

Nathaniel says, “Their relationship takes a bunch of twists and turns throughout the whole [season] because well, Mark, being the older brother, he’s going to dog on Ryan and Ryan, being the younger brother, is going to be a little jealous of Mark sometimes.” He points out though that when it really counts, the two are both really there for each other. “I think it shows that throughout the whole season, really.”

In fact, the star of the series reveals that Mark is by Ryan’s side especially when he gets hurt.

“When Ryan gets hurt, it’s because of his superpower, which is technopathy,” he says, explaining that it means he can control technology with his mind. Ryan connects to the robot through his superpower and when MECH-X4 takes a hit, he feels the pain too. “They’re some types of problems because when Ryan gets hurt, he gets hurt really [badly]. Obviously, Mark’s going to be there for him when his brother gets hurt so you see that a lot.”

Of course, the brothers, and Ryan’s friends, will all be along for the journey of finding out what happened to the creator of MECH-X4. Though Nathaniel laughs a bit when he’s asked for details, he does say, “I can’t say a lot about that because it spoils a little bit in the season but you can know that there will be more about the creator and what his plans are for Ryan.” It’s also a safe bet that fans will find out what the creator deems to be the ‘most important thing’ to know about MECH-X4.

“I used to be very shy when I was a lot younger but I’ve grown and as Ryan has grown up, he becomes more confident in himself and his ability to save others and be the hero of Bay City,” dishes Nathaniel.

Describing the show as “exciting, full of adventure, and full of brotherly moments”, Nathaniel is quick to name some of what fans can expect season one. He says, “Fans can expect to see a lot of action-packed moments, a lot of brotherly moments, a lot of family moments.” He reveals, “There’s heart-wrenching moments, of course. There’s awesome moments, like when I do crazy stunts. There’s also moments of ‘Oh no! What’s happening next?’ There’s a bunch of cliff hangers in the series and it’s really exciting to watch and it’s just super fun.”

Speaking of his stunts, Nathaniel calls that one of his favorite parts about being on the show. “Doing my own stunts and getting a little crazy is in my nature,” he says with a laugh. “It’s fun. It actually brings out who I am.”

The teen is confident that the fun he has behind the scenes will be contagious when fans watch the show. “I think people are going to love watching Ryan, my character, do crazy stuff with the robot.” He mentions that there are some stunts that are too hard for him, which the stunt crew takes over. “They’re really amazing with that,” he enthuses. When he does do his own stunts, Nathaniel is adamant when he says he stays safe while doing them.

In addition to the great action and stunts “MECH-X4” has to offer, Nathaniel thinks for a moment about what else he cannot wait for fans to see. “I’m excited for the fans to see all the characters’ progressions throughout the series. Each one of them grows in a different way. Ryan gets confident and he also starts becoming this hero that everyone starts to love. Spyder – he’s still crazy old Spyder but he starts gaining maturity. Harris starts relating more to people instead of just thinking about book smarts and Mark starts being more of a brother to other people.” He adds that Ryan is now in a leadership role amongst the group and he learns more about that as well.

When asked to name one thing he’d like to control with his mind if he could, the young actor decided on a car. “[It’d be] super easy so that’d be exciting,” he says.

Nathaniel does not hesitate to answer the last question that Teenplicity poses for him.

[The greatest thing about being on ‘MECH-X4’ is] the comradery with everyone.”

Be sure to tune in to Disney Channel starting tonight at 8:30PM as the network celebrates an EXPANDED PREMIERE WEEKEND through Sunday, November 13th!