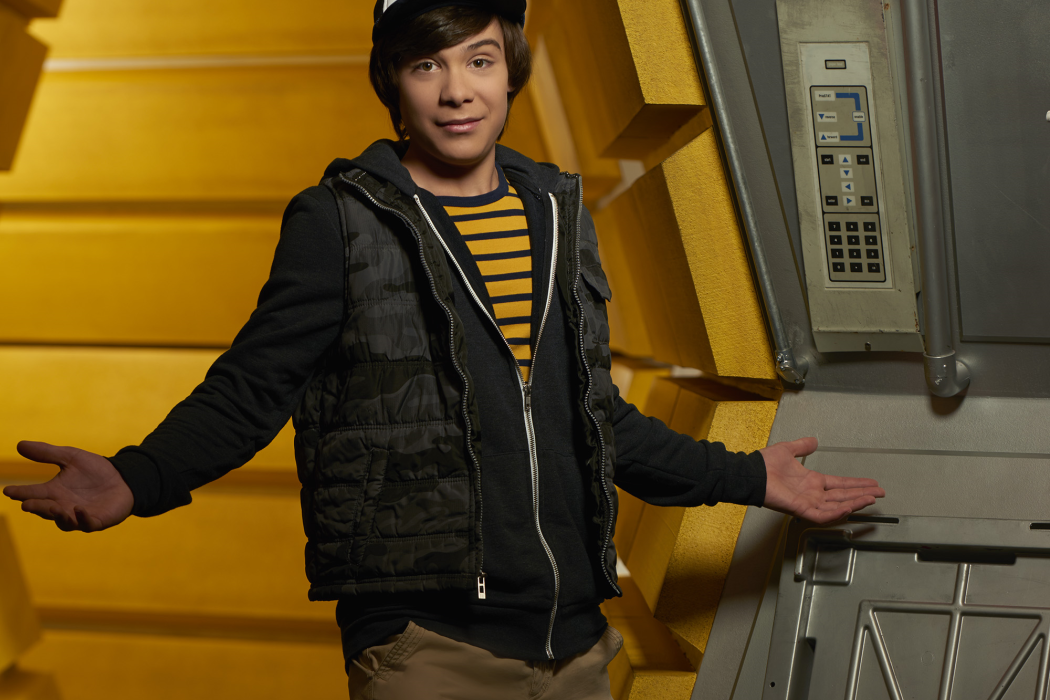 The excitable energy that surrounds Pearce Joza as he speaks about “MECH-X4”, the newest show to join Disney XD’s lineup starting this weekend, is contagious. Pearce plays Spyder, one of the four members of the robot MECH-X4 that defends the town from mysterious monsters that have begun to suddenly pop up.

“First of all, he’s a daredevil,” the young actor is quick to say of his character. “He’s always ready to do anything crazy – never afraid to jump a school,” he continues, referring to events that occur in the very first episode. “He’s also like a puppy, he’s very energized all the time.” In addition, Pearce explains Spyder’s role amongst the friends in that he likes to keep the whole team together and centered.

The fourteen year old actor thinks back to his time in Colorado when he speaks of relating to Spyder. He mentions the thousands of acres of natural forest there was when he walked out his back door.

“I could just walk out and pretend a log is a submarine and go on this crazy adventure with my imagination,” he enthuses. It’s easy to see how he translates his experiences to Spyder, who is more than ready to accept the odd appearance of the robot and the way Ryan [Nathaniel J. Potvin] becomes a technopath over the summer.

The slight difference comes in the form of schooling, as Pearce reveals he’s very good in school. “I’m taking college-level courses which is awesome. It’s cool!”

When it comes to MECH-X4, Pearce’s character controls the weaponry of the robot. “He’s never afraid to fight the bad guy [and] use his weapons to help his team.”

The excitement rises as Teenplicity asks him what his favorite weapon to use in the robot is.

“It’s the Plasma Axe,” he exclaims. “It’s Ryan and Spyder’s special ability since I use my cannon arm and twist it to get the Plasma Axe – that’s my favorite.”

As cool as it is to control part of a robot, Pearce describes the journey that Spyder will go in season one of the series.

“In the first season, he really goes through being a normal kid in school but also having to be a hero and fighting against these monsters that are coming into the city.” Pearce’s affection towards his character grows in his voice as he says, “He helps his friends. He always keeps a good attitude. That’s really what he’s working for.”

Spyder is able to keep his positive attitude in his actions, even though he doesn’t always think of the consequences to them. “I think he always makes everything into a positive outcome. If he launches a couple of attacks and maybe they don’t go so well, he says, ‘Well, at least I tried!’ He always makes the best of it,” says the young actor.

Pearce keeps the positive outlook that his character has as he teases what fans can expect in the first season of “MECH-X4”.

“I think fans can expect a sense of family and loving, but always there’s going to be action and adventure and excitement.” He reveals, “There’s something going to always be going on in the background, even if you don’t realize.” The teen enthuses that he’s most excited for fans to see how many battles the group wins and how many times they celebrate. He looks forward to fans seeing, “What we do to celebrate and how many people we help. I think that’s going to be a great message.”

When asked if “MECH-X4” will have one main villain or multiple ones, a smirk is clear in Pearce’s tone as he teases, “Well, there’s always more villains.”

However, the one that fans find out about at the very end of the first episode is one of the actor’s favorites. “[They] play it very well and I love how [they] do it.”

What position would Pearce love to have in MECH-X4 if given the chance? “I think of course it’d be really cool to be the technopath,” he says. “But not just in the robot, maybe outside [of it too]! Controlling like your microwave,” Pearce comments, his smile evident as he speaks. “That’d be really cool.”

The talented actor laughs when Teenplicity asked him if a microwave was the one object he’d like to control with his mind.

“Haha, yes! You can put that on there, that’d be pretty cool!”

In Pearce’s dream MECH-X4 robot, he knows which celebrities he’d like to help him out. “First of all, I think it’d be Kevin Hart,” he decides after a moment of thinking. “I think he’d be the funny part of it – I think he’d be Spyder. Bruce Lee would be pretty cool to have as our cavalry. And the third – Nate was talking earlier and he said Christ Pratt and I’d like to steal that from him because that’s be pretty cool. That would be pretty awesome.” The excitement couldn’t be shaken from Pearce’s voice as he spoke and by the sound of his voice, his smile seemed to only grow.

The young actor’s fondness for the show he’s taken part of is clear as he finishes the sentence: “The greatest thing about being on ‘MECH-X4’ is…”

Pearce takes another moment to think before saying, “…is the sense of everybody coming together and being one. Ryan has the actual superpower but everybody else has their own little power. Like to control the weapons or keep everybody together or fix the robot. I think that’s pretty cool.”

Read our review of Wonder here. At sixteen years old, Izabela Vidovic has lived quite a few lives…through characters of course. From the post-apocalyptic teen…