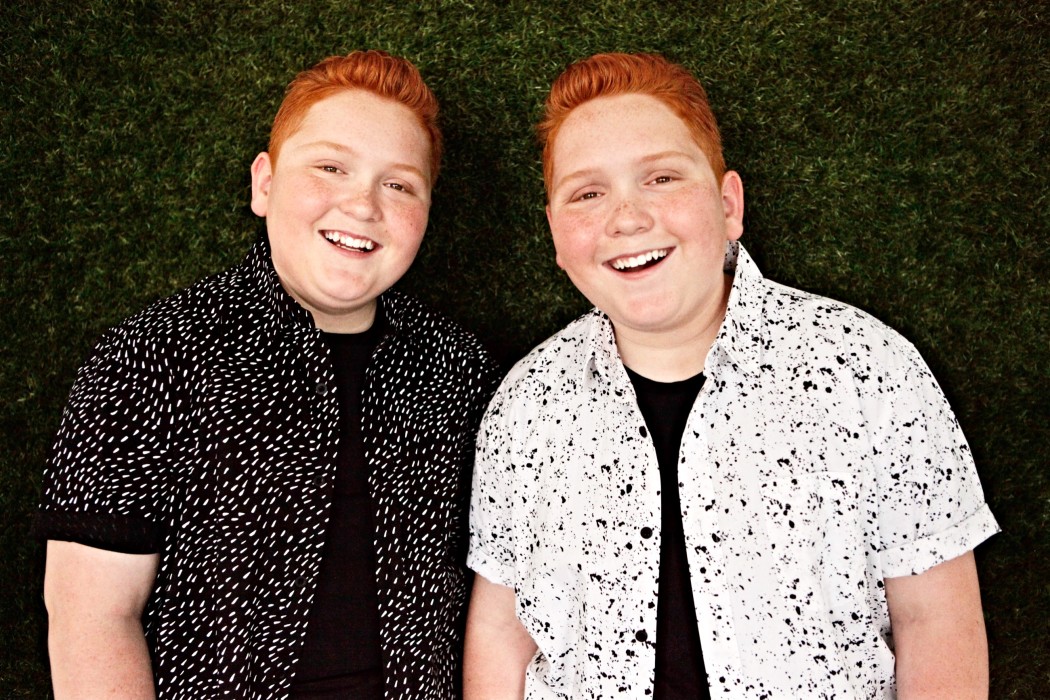 Starting tonight, Disney Channel’s Best Friends Whenever returns for season two with a week of premieres. The series follows two best friends who, after a science experiment gone bad, have the ability to travel through time whenever they want – and even when they don’t.

For Benjamin and Matthew Royer, being a part of Best Friends Whenever means a time of their life that they won’t forget. Portraying the younger siblings of Lauren Taylor’s character, Bret and Chet respectively, the twin actors say that they are so lucky to work with such a great cast.

“We all get along on and off set,” the boys say. “We socialize together and really act like siblings sometimes.”

The family the cast and crew have created on the show recently expanded with the addition of former The Voice contestant Bryana Salaz. Talking about her joining the show, Benjamin and Matthew say, “Bryana is a great addition to our cast; she immediately fit in as if she was always here. We have enjoyed getting to know her.”

As for what else is happening in season two, the actors tease, “Fans can expect many new story lines that put the girls in all kinds of crazy situations.” As for their characters, they say, “Bret and Chet find their own sense of style.”

Of course, things do not occur without incident, if their favorite memory from set is to go by.

Benjamin and Matthew revealed that their favorite memory was actually from not too long ago.

“We recently performed an awesome stunt in season two that our fans will love,” they spill to Teenplicity. “You will have to tune in to see it!”

Could this be happening in the episode that they’re most excited for fans to see? Citing this as “Epic Girl’s Day”, the boys remark that fans will should make sure to tune into it when it airs on Wednesday night.

The twins may have hinted at even more hijinks going on with their characters when asked what they would like to see happen to Bret and Chet in the future.

“We would love to see our characters time travel. Bret and Chet could get themselves into some great messes…” they trail off.

If Benjamin and Matthew had the ability to time travel themselves, they are quick to pick where they’d travel to!

Matthew’s choice is quite similar, however for a different reason. “I would probably go to the ‘80s or ‘90s. I would love to see some sporting events from back then,” he says. “I love watching classic games online.”

When the opportunity opened for fans to ask questions, the response was immediate. One Twitter fan @LuvAlwaysEmily wanted to know how Benjamin and Matthew got into acting.

“Thanks for asking, Emily,” they begin in response. “We have actually been acting since we were infants. We have cousins who were child actors. One was the voice of Nemo,” they dish. “When we were born, our cousins mentioned to their agents that our mom had identical twins. The agency called our mom looking for twin babies for a project. We have been with that agency for 13 years. We both love the whole process of acting.”

Teenplicity took the opportunity to expand on that and ask the rising actors if one of them ever wanted to act more than the other.

“We have worked on separate projects, but neither of us have ever desired taking a break,” they say.

As new ambassadors for Disney/ABC’s “Choose Kindness” Anti-Bullying campaign, Benjamin and Matthew are going to be inspirations for the many fans of Disney Channel and beyond. With this new title, Teenplicity asked who inspired them personally.

“I am a huge baseball fan,” Benjamin starts. “I would have to say that Kirk Gibson is a huge inspiration to me. Coming through for his team in clutch moments and now battling Parkinson’s disease is an inspiration to everyone.”

“My family members are my biggest inspiration,” says Matthew. “They inspire me to be the best person I can be.”

With the craziness of sudden recognition that comes with starring on a Disney Channel series, both boys have been able to learn from their experience thus far. Benjamin cites that he’s learned to overcome some fears that have challenged him. “I have tried some things that I would never have tried before in the past.”

Matthew is taking his newfound recognition seriously and is realizing the impact it can have on others. “I have learned that with being recognized from television, I can use it as a platform to help others and create a positive message.”

Of course, with this new stardom comes fans and tons of support.

“Our fans are really great to us when we are out in public.” The two joke, “We are hard to miss with our red hair.”

They go on to say, “When we are out, the fans will run up to us and are excited to meet us. They usually share about a favorite episode. They usually want pictures and autographs. We have enjoyed interacting with them. On social media, we love interactions with fans on Twitter, Facebook, Instagram, and Snapchat!”

And each brother has had unique interactions that have really stuck with them.

“One time I was with my mom driving in a parking lot at the mall. Two teenage girls recognized me through the car window,” Benjamin says. “They started chasing our car until we parked. They really wanted pictures and autographs. It was a little crazy but fun.”

“Last summer, right after the show’s premiere, we were in New York City,” remembers Matthew. “We went to see a Broadway show, and at the intermission, a little girl came running up screaming. She screamed, ‘I knew it was them. I told you it was them!’ She was so excited to meet us. We found out that her name was Presley. After the show, we saw her walking with her family out on the sidewalk. We said, ‘Goodnight Presley!’ She lost her mind.”

It’s that kind of dedication and love that the brothers appreciate so deeply. They send their thanks to their fans for being so supportive. As Matthew hopes for fans to enjoy season two of Best Friends Whenever, Benjamin teases that there is more to come and they can’t wait to share it.

When Twitter fan @polaroidceline asked a really fun question, Teenplicity just had to find out the boys answers!

Teenplicity: Twitter fan @polaroidceline asked if you could be any kind of shoe, what shoe would you be and why?

Benjamin: I would be the shoe that Marty McFly wears in Back to the Future 2! They are so awesome and everyone took notice of them.

Matthew: I would be slippers because they are so comfy and cozy.

**Above photo credit to Randi Lamey

Kodi James Can Be Your ‘Elizabeth Taylor’

Inspiration can strike almost anywhere. It comes through a dream, through an experience, through a thought in your head. Sometimes, inspiration comes to you…