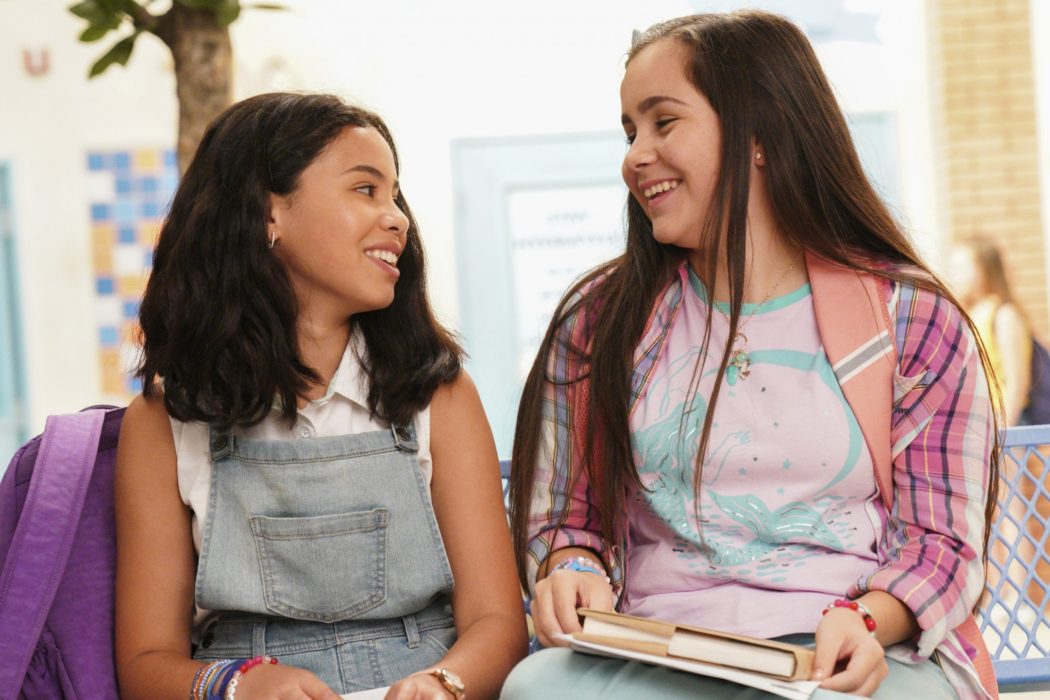 Disney Plus’ latest series Diary of a Future President follows Elena Cañero-Reed (Tess Romero) during two periods of her life. First, we meet her briefly as an adult (played by Gina Rodriguez) on her way to the presidency. Then, we take it back to when she’s twelve attending middle school and dealing with the highs and lows of adolescence and coming into her own. Among these highs and lows include still coming to terms with losing her father, adjusting to her mom (Selenis Leyva) finding love again, and a friendship breakup.

There to always help and have her back is her best friend Sasha played by Carmina Garay. “Elena and Sasha are really the bestest friends you would ever meet. They have known each other for years and love each other greatly. Whenever one has a problem, they always rely on the other for support and help,” Carmina begins. “They also look out for one another and assist with the other’s shenanigans, no matter how crazy they are. Watching this relationship, we see it grow and change as a real friendship would. Just like all real friendships, they can have problems and bumps along the road, but no matter what, it’s just a beautiful, funny, and dynamic relationship to watch,” she exclaims. 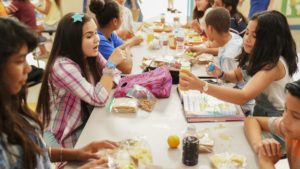 “Tess and I really wanted to show how close Elena and Sasha were. They know each other like the back of their hands, so that meant we had to make sure that we portrayed that level of friendship. We knew that was key for the story,” Carmina talks of the behind the scenes effort put into what we see of their dynamic on screen. “The mutual love for each other needed to be believable or the dynamic wouldn’t work. In the end, it became really easy to find that closeness,” she muses, “because Tess and I became really close as well! We are really great friends, so I feel that our friendship shines through in Elena and Sasha’s friendship as well.”

It was maybe fate that brought Carmina to this project. Unknown to her until she was asked to read for Sasha, the self-proclaimed HUGE (all caps) Disney fan wasn’t aware the show was a part of Disney Plus until she booked it and thus, she would become the third generation of her family to join the Disney family. Her grandfather, Joaquin Garay voiced Panchito Pistoles in the animated feature The Three Caballeros (1944) while her father Joaquin Garay III played Paco in Herbie Goes Bananas (1980).

“When I got the script, I was very intrigued and looked for as much information as I could. Finding out that this was a project created by Ilana Peña and being produced by Gina Rodriguez, I knew then that it was going to tell a great story and it does,” she exclaims. “I loved the story being about how a young Latina girl eventually makes her way to the White House and to see that she was just a regular middle school kid dealing with all the things that we do? That really brought it home,” she says noting that Sasha being described with a fun, bubbly, hilarious personality added to her excitement and her want to be a part of the project.

I loved the story being about how a young Latina girl eventually makes her way to the White House and to see that she was just a regular middle school kid dealing with all the things that we do? That really brought it home.

Still, Carmina guarantees that Sasha has depth to her as well. “I really wanted to convey that Sasha is not just another best friend sidekick. Sasha may be funny, colorful, and bubbly, but that does not mean that is all there is to her character. She has feelings and layers beneath her super fashionable outfits and accessories. She is truly a part of Elena’s world; she is not just living in it. Sasha will definitely surprise you with her depth and the growth she has during the season,” Carmina promises.

“I hope Diary of a Future President brings a sense of realness within the show and that it’s able to touch many people on many different levels. I think it is also something new and fresh that has never really been done at Disney before,” Carmina comments when I ask her about the significance of the show in the world of Disney. “Diary of a Future President is a very inspiring show and one of the biggest things I’ve learned from it is that even if things don’t go as you imagined them, you can always bounce back to something better.”

Talking more about the show and what it stands for, Carmina says that she hopes people watching the show are impacted in a good way. “The show is so heartwarming and has so many great messages within all the characters, I think people will be able to relate easily to the stories. I want people to be able to walk away from the show feeling good and maybe learning a bit of something about others, and even themselves,” she explains.

At twelve, Elena doesn’t immediately know that she’ll be president or even that she wants to be president. But, there is a lot about her that makes you root for her and believe in her. “Elena is a very unique girl. There is something about her that is just presidential in the first place. Elena has this unmistakable leadership quality about her.” Carmina goes on to describe Elena as very smart, organized, and “has every aspect of her life down to a T.”

“She has big plans for herself and wants them to happen, even if she has to work harder than she ever has before. Though Elena may sometimes get a little frazzled, she does come back wiser and ready for the next adventure,” she explains about what makes Elena a good (future) president.

I ask later on if Carmina herself was running for president, what she would run her campaign on which she expresses: unity. “If I was running for a presidential campaign, I would run it based on the point that we are one country. The USA is so divided between parties and who is right, that we can’t see that the real problem is ourselves,” she says. “I would really focus on the point that no matter the party, no matter the opinion, we can work out the problems we are facing, as long as we do it together.”

As much as Diary of a Future President feels like an appreciation letter to the experience of adolescence, it also feels like an appreciation to young folks, especially to all of the Elena Cañero-Reed’s out there. “I may not be very old, but I do have some wisdom in my few years,” Carmina exclaims about her own experience being a young person figuring out life and looking towards the future. “One thing I have learned is to embrace the fact that I am still just a kid! Some of my interests may seem immature, and I may not like or be fond of the things that society thinks teenagers like me should, but that does not restrict me from living my life.”

Being a kid every once in a while is good for everyone’s soul and I believe that even grownups can benefit from it.

“The young people of our world today are brilliant and free but burdened by the responsibilities that we have now inherited on a global basis. Being a kid every once in a while is good for everyone’s soul and I believe that even grownups can benefit from it.” When I ask her what she wants older generations to offer as support for her generation she says, “Perhaps, every once in a while take some time to just enjoy the childish joys of life,” followed by a quote from Walt Disney: “Growing old is mandatory, growing up is optional.” 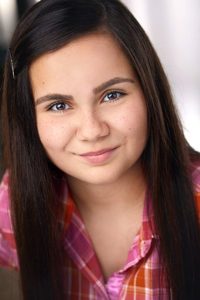 Which brings us to her other project, the Emmy nominated PEN15 on Hulu. Starring Maya Erskine and Anna Konkle playing 13-year-old versions of themselves alongside a cast of 13-year-olds, PEN15 is as much a farce as it is a heartwarming coming-of-age where Maya and Anna survive middle school in the 2000s as outcasts and best friends.

“When I learned about PEN15 and that it was going to be a period piece, I thought it was the coolest thing! It takes place a bit before I was born, so it was neat to experience the nostalgia up close. The show is unique in that it is truly an adult show with the story being told with kids.” Originally auditioning for a different role, Carmina received a callback for the role of Jenna, Sam’s girlfriend. She shares that we can expect Jenna to make an appearance in the upcoming season as well.

“Friendship is very important in my life. I’ve always looked for good friends I can depend on and trust,” she starts when I ask her about the role of friendship in her life since it’s such a common theme in PEN15 as well. She notes later in another answer that she really enjoys the friendship between Ron, Harry, and Hermione in Harry Potter and how she looks for the qualities of their dynamic–love, trust, and willing helpfulness–in her own friendships. “Like anyone, I’ve had to learn what real friendship is, how to make new friends, and how and when to trust people. The hard part is getting hurt and getting let down. I think you learn as you go. I am happy to say that I am very tight with many of my fellow Diary of a Future President castmates. They have shown me true friendship and I am grateful for that.”