Celina Smith is every bit as bubbly and electric as you’d imagine she’d be after watching her play Rebecca on Tyler Perry’s Young Dylan. Even over a phone call, she comes through with jokes and infectious laughter while being sure not to let anything slip so that viewers walk into the new season of the show completely surprised.

Young Dylan which stars Youtube sensation Young Dylan (Dylan Gilmer) as the lead follows the character as an aspiring rapper from Chicago whose grandmother moves him in with his affluent uncle after his mother doesn’t come home one day. If you’ve ever watch Fresh Prince, you can imagine that of course hijinks and antics quickly follow as Young Dylan’s upbringing and style clash with that of his Uncle Myles (Carl Anthony Payne II) and Aunt Yasmin (Mieko Hillman). 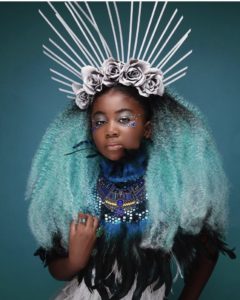 Season two of Young Dylan premieres tomorrow (June 12th) on Nickelodeon. While Celina couldn’t share what was coming up and what people could expect outside of (at the very least) multiple surprises both in the premiere and throughout the season, she does reflect on the big ending of the first season. After staying with his cousins for a while and Dylan slowly beginning to get used to living there and away from his mom, season one shocked viewers with not only the return of his mom but her request that he come back home with her.

While the cast didn’t know the finale would end like that, Celina does share that there was some speculation especially from her and Jet Miller (who plays Rebecca’s best friend Bethany). The two were certain that there would be some kind of cliffhanger and decided on that one. “I was kinda sad about leaving so I kinda wanted to take that emotion and use it,” she says about filming the scene when Dylan leaves with his mom. We see Rebecca crying alongside her parents and brother because they’re not ready for him to go. “I was really, really sad about it,” she admits. What made the scene maybe even more emotional was that at the time, the cast also didn’t know if they were getting a season two so not only was their characters worried about losing Dylan, the cast was uncertain if this was the last time they’d work together in these roles.

I also feel like [the Young Dylan cast has] just really grown as a family and I think that’s really cool because they’re all just amazing people and I’m just really excited to see where we all go and how we all grow.

When she first learned about Young Dylan and got her start on the show, Celina was 10. Now at 11, she laughs because while in terms of numbers it doesn’t really seem/feel like a long time, she says it has made a difference. At the start, her excitement for the show came from being able to play this character that carried the sassy energy she saw in herself. She still considers herself to be sassy, but not like she was at the time.

Her other excitement also came from the fact that part of joining the Nickelodeon family meant that she got to get slimed. Which the cast ended up doing. She gave a few secrets about which kind of slime got slimed with that essentially meant that the slime was both gooey and sticky getting her whole outfit and her hair covered. She excitedly laughs and beams talking about the experience calling it awesome and weird despite having to get her hair washed after to get the slime out of her braids.

Young Dylan is Celina’s first role on television. Before then, she was on stage in The Lion King. Playing Young Nala on the Rafiki Tour of the show prepared her acting-wise. “Before I did The Lion King, I was really almost scared to start acting because I had never done it before.” Her experience in The Lion King taught her about the industry and with the help of acting coaches, how to enunciate her lines, something that she laughs at while saying. It was a joyful and big learning experience for her, but she quickly realized she had more to learn when she began Young Dylan, especially learning big scripts.

I feel like we’re kinda growing more–like [I’m] not exactly like Rebecca but I’m getting comfortable as her and playing her.

She lets out her signature laugh again thinking about the size of the scripts. “I wasn’t really prepared for that because I never learned 50-page scripts before. Doing The Lion King, I think I had like a total of 30 lines and that wasn’t a lot, but with Young Dylan, I had a lot because it was like 50-52 pages and I wasn’t used to all of that.” Luckily, the experience of being on set and filming so many episodes meant that she could hone her craft and get better so that now she’s able to learn her scripts faster and get used to the pace.

At the time of our conversation, Celina and the cast were still filming season two. They weren’t the only show back in production, but there were only a few filming. Which meant they had to also figure out what filming a multi-cam sitcom–which usually relies on live audience energy–safely looks and feels like during a pandemic. “I mean, it was really, really fun shooting and we had such an amazing time,” Celina says about the experience. “They had more stuff, like more activities for the kids to do so we could quarantine and stuff. We had to quarantine a lot during the process so they had a bunch more stuff for everyone to do and I feel like that really added to the journey and that was really, really cool.”

Aside from acting, Celina is also interested in music and dance.  It’s something that she credits the Fresh Beat Band for sparking. She breaks into laughter about Fresh Beat Band and her obsession with them at the time including going to a concert of theirs when she was seven. She almost goes on about one of her favorite episodes and a song from it before stopping herself and deciding that she’s not gonna get into it. “But I really loved the Fresh Beat Band. I guess that’s where it started. I watched it at a very young age,” she says.

She’s excited about making original music but until then, Celina has released videos on her Youtube channel for covers of both Billie Eilish and Meghan Trainor. Billie Eilish especially, she’s a huge fan of staying up until midnight to listen to where do we go when we fall asleep when it first released. “I love Billie Eilish like, I wish I had more merch or whatever,” she says excitedly. She’s excited about what all Billie has coming up and also how she’s “won” her mom over after her not being into Billie when she first started listening to her.

“When I like a song, I kinda listen to it over and over and over and over,” Celina starts when I ask her about covering “My Future.” “And when it gets stuck in my head I kinda just will be like, ‘Okay, I wanna sing this.'” She describes her music taste as all over the place and says this happens to her with a bunch of songs but that with “My Future” part of what stuck was that she liked the way it had a message. It’s a personal song for Billie, but it also feels personal for Celina as well which meant that it was time to get personal and bring her own understanding of the song into the music video. Her sister co-stars in the video with her because when thinking about her future and what that entails, she looks also to her sister who looks like the older version of her.

Born and raised in Atlanta, she currently films Young Dylan there too. “I’ve lived in Atlanta my whole life,” she says when I ask her if it influences her and her approach to art. It’s a question that she doesn’t think she has an answer to but one she, “feels like [she] should know.”

I have to tell you I’m going way out of my comfort zone and I’m happy about it.

“I mean, like, honestly, I feel like Atlanta is a pretty creative spot, you know, there’s a lot of like spray paint,” she shares. “There’s this big painting of John Lewis right by my mom’s job, I think. It’s a big tall building and it has John Lewis painted on it and that’s really beautiful. I think Atlanta is a really creative place and I think it’s a very peaceful, creative place with a lot of good restaurants and stuff like that.”

Otherwise, for what’s next for Celina, it seems that we’ll have to wait and see. She’s silent on giving anything away both for the show and for any upcoming music in the works, but where she’s going with it is going to show growth. “I have to tell you I’m going way out of my comfort zone and I’m happy about it,” she admits. “A lot of artists are singing sometimes out of their comfort zone and so I kinda feel like I’m getting out of my comfort zone and singing songs that, you know, when I was younger I thought I literally could not sing or I would think that I could not sing. But I’m excited, I’m really excited and I’m happy,” Celina gives out a big yay.

Getting out of that comfort zone wasn’t easy, especially at this time, she reflects. During the pandemic, she found herself “sitting and doing nothing all day” and growing into that habit where it was easier for her to watch TV all day instead. She recalls almost not wanting to get out of that because of how hard it was to do it. “It took me a minute, it definitely took me a minute. I just think now I’m out of that…of course I pick my days where, you know, I just do nothing because I’m sure everyone needs that, but I guess after I got out of that whole thing, you know, my mom was like, ‘Alright, Celina, we gotta get outta this habit, do something else.'” It wasn’t exactly easy, but it was something she was ready for, “But after that, you know, I guess we’re doing all of these songs and all that kind of stuff.”

You can stay up to date on all things Celina Smith by following her Youtube, and Instagram accounts.