Ahead of the premiere of Nickelodeon’s brand new show Warped!, TEENPLICITY spoke with the cast to get to know their characters, what audiences can expect from the series, and so much more! Check out what Anton Starkman has to say about his character Milo below!

Every person has that one topic that if they were asked to take a test on regarding their knowledge, they’d come away with a perfect score. For Milo in Nickelodeon’s newest series Warped!, that topic is comic books.

“Milo is a huge comic book nerd who takes pride in how much he knows about every character, story, and universe,” Anton Starkman, the actor behind the character, says. “He gets flustered pretty easily and prefers when things are done his way.”

In the series, Anton’s character works at a comic book store called Warped! and is thrown off balance by his boss deciding to hire a new employee – Ruby. Despite a less than stellar start, the two become friends and work together on creating a graphic novel.

“The addition of Ruby to Milo’s world definitely adds a lot of chaos and wackiness, but it also gets Milo out of his comfort zone,” the actor says. “Ruby sees the world different from Milo and that helps the two of them conquer their problems together.” 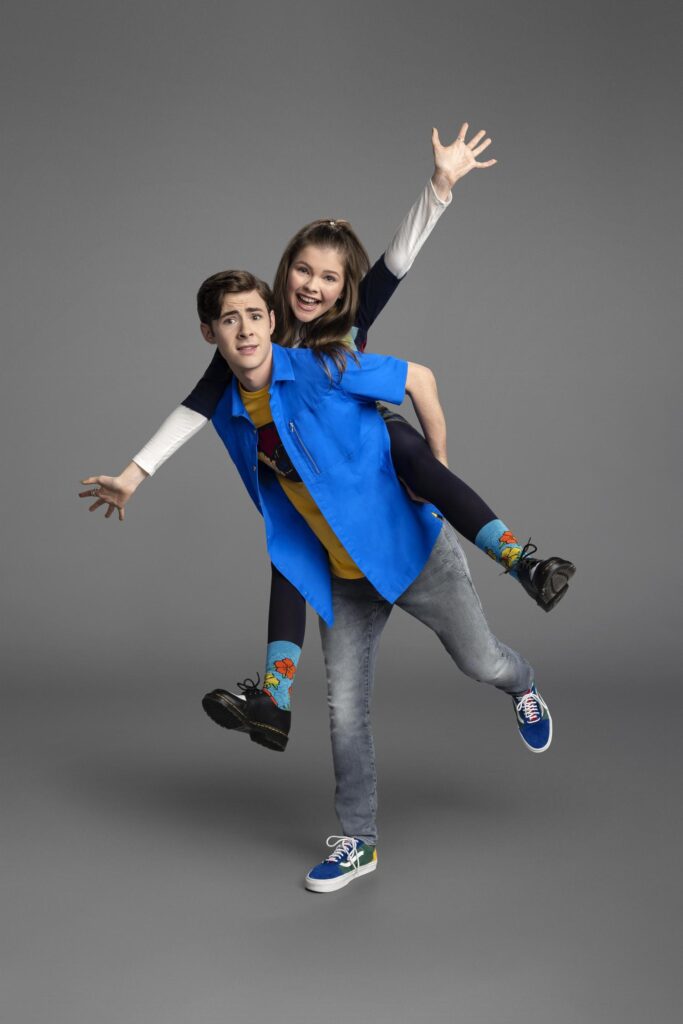 Anton adds that though Milo and Ruby are polar opposites, “Slowly throughout the season, audiences will watch them use that to their advantage. They start out as two people forced to work together but very quickly their friendship grows to the point where they rely on each other.” In addition to the Milo and Ruby friendship, he also loves his character’s friendship with Darby and Hurley. “It’s the kind of friendship where we can have a whole conversation without saying any words. They balance each other out perfectly,” he says.

“There are a few episodes that showcase the fact that the three of them have known each other since they were kids,” Anton reveals.

The actor goes on to tease, “I can’t wait for audiences to see a few things. First, the sets and all the cool props we have. I also can’t wait for people to watch the friendships between the characters grow.”

There is one moment in particular that Anton is extremely excited for audiences to finally see and by the way he speaks of it, TEENPLICITY has a good feeling it’s the same episode that his Warped! co-star Christopher Martinez shared a bit about.

“Slowly throughout the season, audiences will watch them use that to their advantage. They start out as two people forced to work together but very quickly their friendship grows to the point where they rely on each other.”

“There is one episode that I cannot wait for people to watch. I can’t say too much without spoiling it, but it may or may not have a space theme! The sets, the props, and everything else about the episode is just out of this world!”

What Anton can say, however, is something he would love to teach Milo is and something he could learn from his character. Considering his passion for learning and furthering his education (he’s already halfway through a degree in psychology due to classes he took in high school!), TEENPLICITY posed the question to him and got awesome results.

“There are a few things I’d love to teach Milo. First and foremost, I’d love to teach him how to relax and enjoy the moment he’s in. He often gets caught up in the worst-case scenario and he definitely needs to learn how to see the bigger picture,” he says. “There’s also a lot he could teach me! Milo is definitely more responsible and on time than I am. I definitely should follow after Milo and add a bit of structure to my life.”

Anton would also love to bring some of his interests to Milo, like his passion for photography, drawing, and painting. “I also love storytelling and Milo is a great writer, so I can’t wait for the chance to bridge my interests with the show!” He goes on to add, “Also, just being on the show fulfills so many of my interests. I get to watch directors, writers, camera operators, and other actors all doing what they love. Plus, I get to be surrounded by comics!”

When the actor talks about comics, he rivals the passion his character shows on Warped!. He’s knowledgeable, referencing specific arcs and characters, and clearly loves the storytelling of comic books. 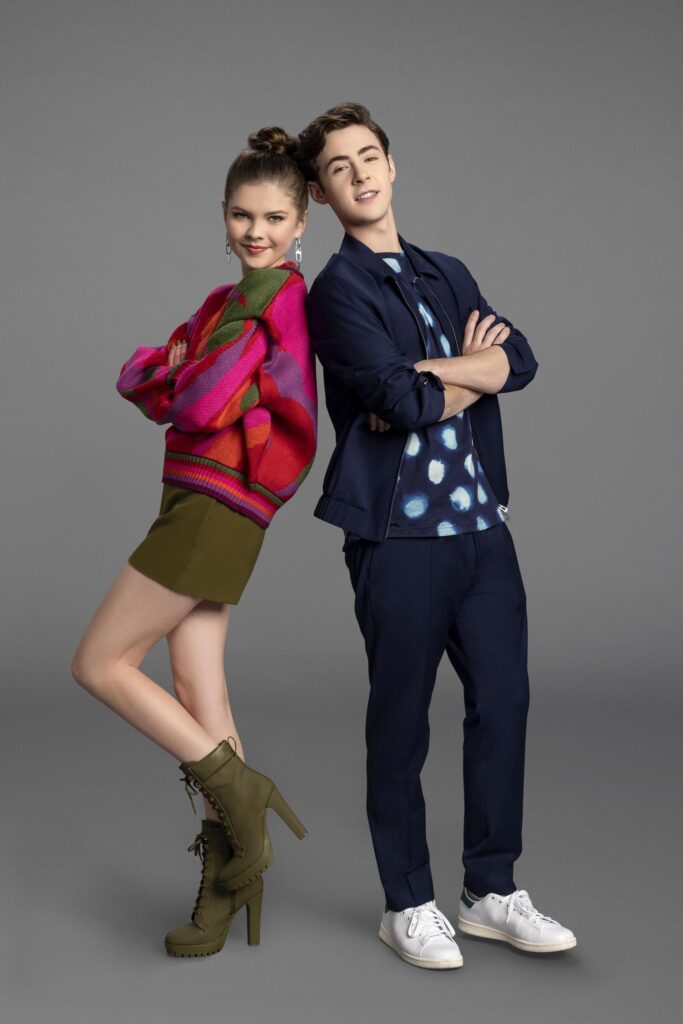 It is also no surprise when Anton chooses Spider-Man as the comic book character he’d love to portray. “I mean, the idea of Spider-Man has shaped my childhood and shown me what a hero should be. He’s powerful physically but also wicked smart,” he says. “It’s always been a dream of mine to be a character from the Spider-Man universe.” He isn’t limiting his options, though. “Other than that, there are countless heroes I wish I could be. One hero I’d love to be is named Wiccan. He’s the son of Scarlett Witch and Vision, and he’s super powerful and super intelligent. Plus we kind of look alike!”

The actor has plenty of ideas, too, if he could be added as a new character to any comic book. “There are so, so many comics I wish I could be a part of, but two specific ones are X-Men and Young Justice. I’ve always dreamed of having my own unique superpowers and the idea of being a part of a team that teaches teens to harness their superpowers is just so cool to me.”

But where does his mind take him when it comes to deciding a guest star for Warped! and what their character would be like? To Spider-Man himself – or at least one of them.

“One person I would love to have as a guest star on the show is Andrew Garfield. He is just an incredible actor and from what I’ve seen in interviews he’s an amazing person too! It would be so cool if his character was a comic collector and he was looking to buy a super rare comic from Warped!”

Warped!, despite his lengthy resume, is a completely new experience for Anton. With multiple films, shorts, recurring appearances, and guest spots, Milo marks the first time that Anton is a main character in a series and is working on a multi-cam sit-com.

“Being on Warped! has taught me more about being an actor than I could have ever imagined. I started acting when I was five years old and I’ve gotten the chance to work on a lot of amazing projects. However, this is my first time ever working on a multi-camera sit-com. Everyone works differently than how I’m used to.” The actor explains, “It’s all a faster process. A whole episode is filmed in one week. That being said, it’s such an amazing experience. I get to have more fun with the cast, I get to improvise, and I get to bring out a lot of my own personality, all while bringing this character to life.”

He adds, “This is also the longest running project I’ve ever worked on, so I’ve gotten a chance to grow and learn as this character, which is something I’ve never gotten to do before. I am just so thankful for the opportunity to play this character on such an amazing show.”

Warped! premieres on Nickelodeon on Thursday, January 20th at 7:30pm, with new episodes premiering every Thursday at 7:30pm! 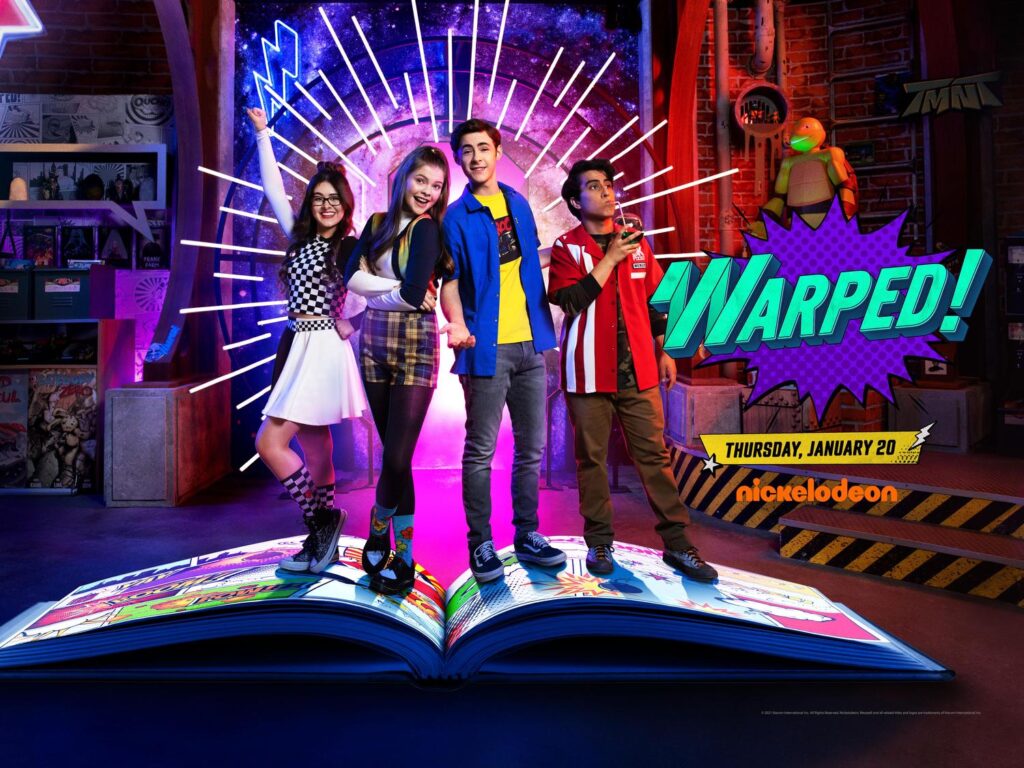