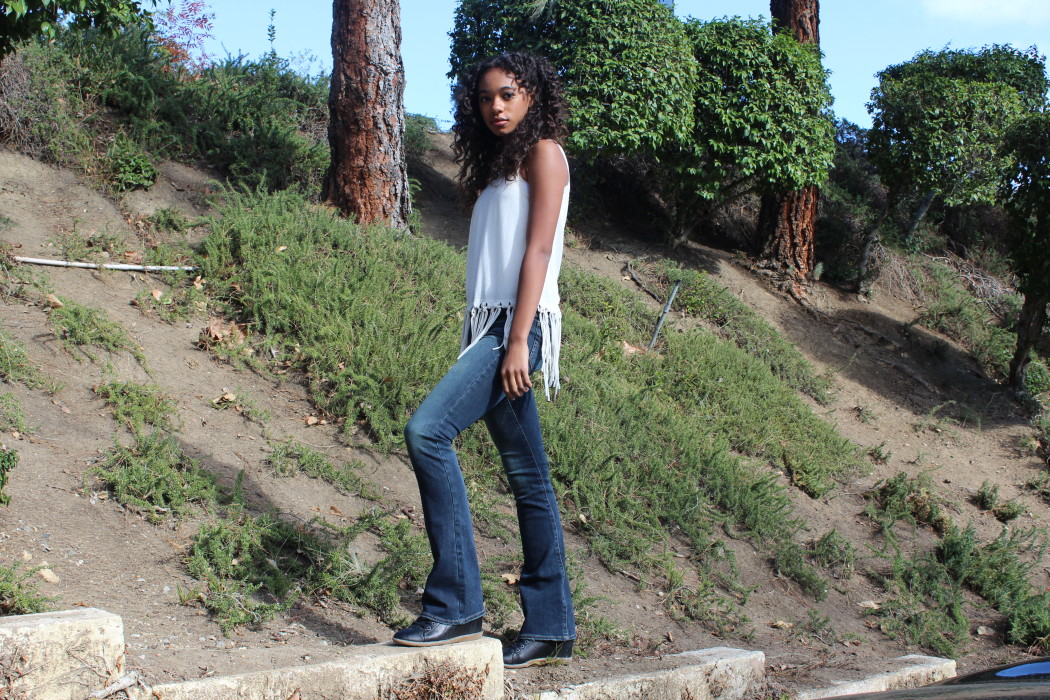 On Gortimer Gibbons Life on Normal Street, Chandler Kinney is passionate, intelligent, perfectionist Catherine Dillman. Off camera, she carries these same traits through different activities such as dance, Tae Kwon Doe, school, and of course, acting.

She began dance at the young age of three and upon moving to Los Angeles joined the Debbie Allen Dance Company ran by the award-winning director (Fame, A Different World), dancer, and choreographer Debbie Allen. “Working alongside so many talented dancers and people inspired me,” Chandler shared about her experience, “My time at the academy taught me how to work hard for the things I wanted in life.”

As a dancer, Chandler is trained in ballet, jazz, contemporary, pointe, and hip hop though she can’t pick a preference. “Each style is distinct. I’ve always liked a large variety of dance styles!” With each one being so unique, the dance styles allow for different skills and techniques to grow. “Ballet is the foundation of dance,” she explained, “[it] teaches you balance, grace, and elegance. It also gives you so much strength! And in hip hop, you can just let loose and add your own style to it.” 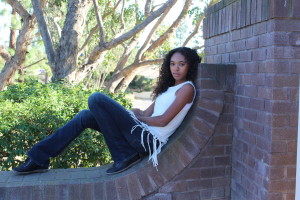 Studying Taw Kwon Do came about a little differently, she cited her brothers as her motivation to study the form of martial arts which she now has a first degree black belt in. “I started off taking classes just for fun and to spend more time with my brothers and it turned into something that I am really interested in.”

Through her balancing act of multiple activities and interests, Chandler has learned discipline and time management. She works hard to stay focused on the things that she loves and to achieve her goals avoiding the idea of the sky being the limit. “Also, they have both made me stronger physically and mentally,” she added referring to dance and martial arts, “dancing on your toes and breaking wood isn’t easy.”

Along with those skills, Chandler is also learning horseback riding and archery. “I have practiced both a little and if I could one day shoot arrows from horseback riding it would be awesome!” She added mentioning the amazing Merida-esque talent as one of her many dreams.

“Honestly, I did face a little doubt about being an actor,” Chandler admitted about pursuing her dreams of acting. “The business is unpredictable and certainly overwhelming at times. You have to have thick skin and a lot of determination. But if you’re truly passionate about it, you can make it through. Sometimes, it feels as if you aren’t moving towards your goal at all. I try to remember that success can be waiting for you right around the corner. And I also remember that everything you go through can make you stronger and takes you one step closer to your dreams.” 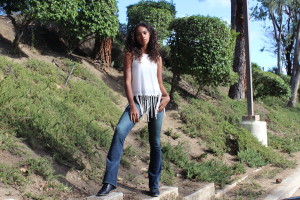 In an industry where very few girls of color are represented, especially in a multifaceted and real way, Chandler playing Catherine is important and inspiring. “One of the many things I absolutely love about my job as an actress is that I have the honor to represent young black girls in a non-stereotypical way.” Along with the likes of Amandla Stenberg, Yara Shahidi, Willow Smith, and Quvenzhané Wallis, Chandler offers the opportunity for young black girls to be able to see themselves on television shows and following their dreams. “To be viewed alongside such talented African-American girls who are doing just that is wonderful to me. In the show Gortimer Gibbon’s Life on Normal Street, I portray Catherine, an extremely intelligent and focused young woman. Playing this role has been a privilege and hopefully serves as a role model to black youth.”

In the hopes of breaking more barriers and accomplishing more dreams, Chandler would love to do an action movie. In a past interview, she mentioned that she admired actress Zoe Saldana who is known for starring in action and science fiction movies. I asked about her perfect action movie plot to star in which if I’m being honest, I am 100% behind, “the action movie would be about a group of teens who all have special skills or powers, and they would have to fight all kinds of evil forces or criminals to protect their world. The action movie would be kind of like a live action Teen Titans movie. I think that would be really cool!”

With Gortimer Gibbons now wrapped as a series, who knows maybe there is a chance we can see her on the big screen with Starfire like powers. Until then, the next season of Gortimer Gibbons, according to Chandler, is expected to come out within the next couple of months and is their best season yet. “As far as my character goes, Catherine grows more in the last season and she is put in tough situations in which she and her friends must try to fix. I’m really pleased with the way she matures. Our viewers will learn so much more about her and will get a glimpse into her life.”  Chandler stated that she’s proud of how season 3 turned out and can’t wait for it to be released.

Of course, she can’t be the only one proud and excited for season 3. The series has received much critical praise for its writing and storytelling, but rather than add on pressure, the praise has motivated them to make the show the best it can be. “When we hear that people enjoy the episodes we’ve released, it just makes us even more excited,” Chandler commented, it doesn’t add too much pressure on us.”

Aside from her role on Gortimer Gibbons, 2015 has been offering to her. Her first appearance as Zay’s (Amir Mitchell-Townes) Texas love Vanessa on the Disney Channel hit show Girl Meets World premiered late last year and she is continuing with her charity work among other things. “One of the most important things that this year has taught me is that confidence is very important. You always hear ‘confidence is key’ and now I fully recognize its significance. I am more confident in myself throughout the many experiences I’ve had in 2015.”

Currently, Chandler works with two organizations, one is called Chandler’s Friends which was created by her and her mother with the hope to give back to kids in need. “My mom and I make soft fleece no-sew blankets for a friend who is a foster mom in Missouri. She is always taking in new kids,” Chandler explained, “and a lot of her foster kids don’t have anything of their own. My mom and I really enjoy doing this and we had the idea to expand and make it into an official organization! So now we are working on making more blankets and we are going to find several charities to donate them to.” While the organization is still in development, Chandler and her mother are working hard and hopeful about the future of the organization.

The other organization is called Compassion International Organization. The Compassion International Organization works to sponsor children in the hopes of ending child poverty and taking a holistic approach to child development. Through the organization, Chandler sponsors a girl in Ethiopia that, through this new perspective and personal opportunity, helps her grow as a person. “Giving back and supporting people who are less fortunate than I am has always been something I’ve been very passionate about. So when they [her parents] showed me the website, I was immediately very interested.” As a sponsor, Chandler receives the experience of getting to be the pen pal of the young girl, “I really enjoy it because not only do I get to learn about another person’s life that is so different from mine, it has also taught me a lot and has expanded my view of our world. Having a pen pal on the opposite side of the globe is such a  beautiful and personal experience and I love it.”

You can stay up to date on all things Chandler Kinney by following her Twitter and Instagram accounts.

You can stay up to date on all things Gortimer Gibbons Life on Normal Street by following their Facebook.

You can learn more about Compassion International Organization by checking out their website.