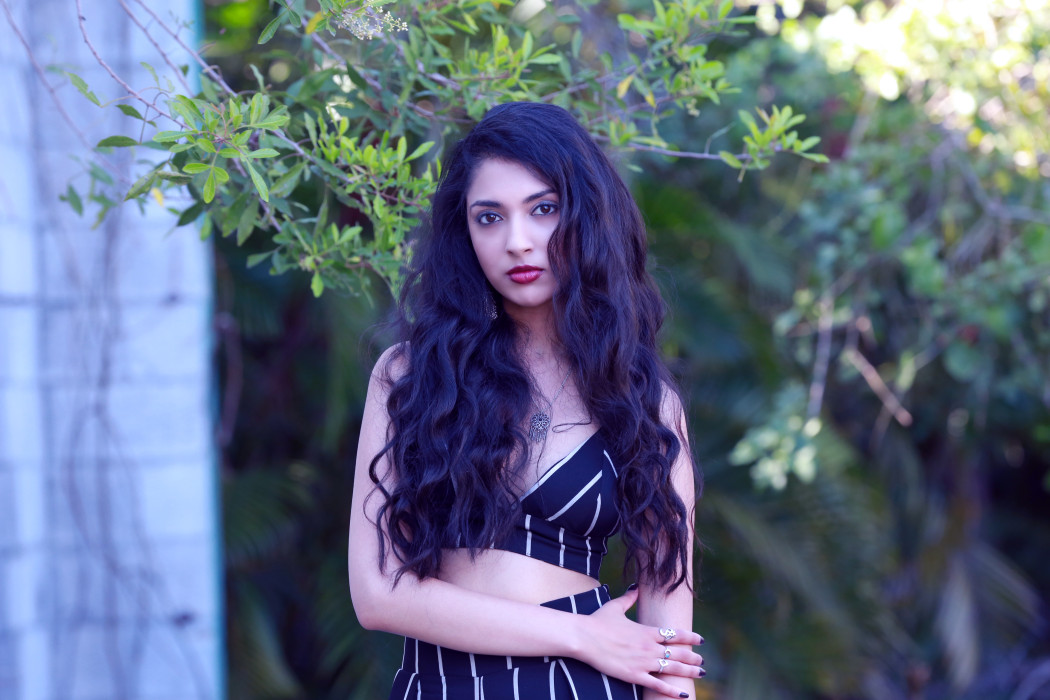 Sometimes, life gives you a curve ball (or curve balls) and regardless of whether or not you know what to do, you have to deal with them somehow, someway. Usually, these curve balls come at you when everything feels like it’s coming together. Other times, these curve balls appear when you’re already busy dodging other ones. It’s just a part of life that we all (hopefully) learn how to navigate. And if not, hopefully, you get close enough.

For singer/song-writer Sonali, she’s had a fair share of navigating and dodging while managing to stay focused on her goals, aspirations, and keeping an optimistic and hopeful outlook on life.

“This is so super cliché, but when I was three years old, I told my parents I was going to be a singer and I meant it,” Sonali reflects about how she set out her path. “I’m not sure how or why I knew with such certainty at that age, but I’ve loved it ever since and started working towards it right then.” In 2012, she attended Clive Davis Institute of Recorded Music at NYU’s Tisch School of the Arts. There, she learned from professors and music industry veterans along the lines of Questlove, Bob Power, Nick Sansano, and Amund Björklund. Throughout her journey as an artist, she admits that she’s experimented with her sound and style throughout the years, “I listen to a bit of everything, so I think that’s natural. I started out making very folk-inspired music, but now I’m making more indie/alt pop-leaning stuff.”

“I think to me, the common thread between everything I do is my songwriting and my voice. There are so many artists who bend genres and step outside the box, I can’t name a single person who exclusively listens to one genre only, and that’s exactly the way it should be,” she exclaims.

I want to be unapologetically myself and the most candid I can be, and I think that’s what people respond to.

In 2014, she released her first EP, Wake Up. A 4-track EP, Wake Up introduced Sonali through a pop sound that carried. Her song “Who We Are” from the EP, originally written as an anti-bullying song, immediately gained traction as a letter to the LGBT community explicitly through the music video. “Authenticity, that’s the first thing I like about any artist, so I strive for the same thing in myself. After all, I’m not sure I’d do a good job at being anyone else,” Sonali reflects on how she looks at herself as an artist. “Whatever I do I never want to be putting a fake show or image out into the world, there’s enough of that going around. I want to be unapologetically myself and the most candid I can be, and I think that’s what people respond to.”

I note to her that honesty and authenticity are clearly evident in her sound and her lyrics which she excitedly thanks me for. “For real, that’s my number one goal when writing anything ever, so that means the world. It’s so easy to get lonely or trick ourselves into feeling lonely, so I hope my music can act like a friend for people in the times where it feels like they might not have anyone to turn to. Whatever you’re going through, you’re not alone, and I hope my music helps people realize that” she assures.

“Kind of going off what I was just saying, for me, it can be really hard to open up sometimes, and I was even more so that way when I was younger. Songwriting has always been a way for me to express myself, both the positive and the negative emotions,” Sonali opens up about how her music has personally helped her. “It’s just the best way, to be honest with yourself.”

Looking back on her career starting out and where she is now, part of that honesty would come in wanting past her to know that it’s okay for her to slow down and take it all in. “I’m very ambitious and goal-driven, and this is an industry where it often takes a long time to get anywhere. That’s one of the hardest parts of doing this for me–it still is. I forget to enjoy the journey sometimes, but you learn so much on the way,” she reflects.

Songwriting has always been a way for me to express myself, both the positive and the negative emotions.

A specific bump in the road of Sonali’s journey hit her early on in her career shortly after she released Wake Up. As she geared up to go on her first tour, Sonali was diagnosed with Chronic Lyme Disease and took time off in order to recover. While still living with the disease and having to make adjustments to her life with that in mind, she explains that the diagnosis gave her an important lesson that she’s still learning. “As I said earlier, I’m a very driven person and when it comes to setting goals, I tended to charge towards them with blinders on, completely disregarding whatever effect that might have on me. Being sidelined by Lyme forced me to wake up from that unhealthy behavior and realize there’s more to life.” Sonali adds, “If you don’t have your health, you don’t have anything, and it’s not a weakness to prioritize your own well-being. That’s still something I have to remind myself.”

Now, being able to perform again, Sonali missed the vibe performing live offered when she was on break, “There’s a certain energy that comes with being on stage. When people are engaged and connecting with your songs it’s just incredible, and there’s nothing that can beat that real-time face to face connection. It’s great having that again!”

Recently, she opened for Pitbull at Sunfest, an experience that she’ll remember for the rest of her life. “I had never been on a stage that size or played for a crowd that large. Festivals are interesting because the audience isn’t there necessarily just to see you, so you don’t really know what kind of a reaction you’re going to get,” she explains. “I was so pleasantly surprised by the number of people singing along and clapping, they were super engaged and just an amazing crowd to play for,” Sonali continued.

She’s also released two new singles within the last few months. The first being “Turn It Around,” a song that addresses facing your insecurities through a vibrant and upbeat sound, “There’s something I do somewhat frequently. I do tend to lean towards sadder lyrics, both when I write and when I listen to music, I’m not sure what it is that draws me to that! But if everyone sounds sad too it’s a little heavy.”

“As much as I love reflective and challenging lyrics, I want to make music that makes you want to dance and feel good! A really great example of that is After Laughter by Paramore,” Sonali cites the bands latest album; a mix of new wave, synth-pop, and pop rock that addresses themes of “serious sadness” like anxiety, exhaustion, and depression.

Sonali relates on a level in terms of allowing honesty into her songs, “I think at first it just surprised me how vulnerable I was able to be while writing because that was something I really had a hard time doing when I was younger. I remember I was too afraid to keep a journal because I was paranoid someone would find it and know what I was thinking, and now I’m making a whole career out of sharing my most intimate and personal thoughts!”

“Funny how things work out,” she quips.

A huge motivator in me doing this is because there is such little representation for Indian-Americans in the entertainment industry, so to have their support and know what I’m doing means something to them is everything.

Her other single is “Close Enough” which is about trying to stay friends with an ex. “When I played ‘Close Enough’ for my friends and for my team, it was overwhelmingly the song that got the most response. The lyrics are so relatable, especially for anyone who isn’t the biggest fan of casual dating or hookup culture, so I think it’s easy for people to see themselves in it,” she explains about choosing the song as a single.

Drawing from her own personal experience, Sonali usually tries to remain friends with her exes depending on the circumstances. “I guess that’s why my friend described it as the story of my life,” Sonali jokes. “It’s definitely a situation I’ve related to on multiple occasions. Being friends with an ex is not always a horrible idea, in fact, some of my most beautiful friendships are with people I once dated, however, if the situation between the two people isn’t clear it can definitely lead to a lot of mixed signals and confusion, which is where this song came from.”

“I’m really pumped for the next single I’m going to release,” she hints about what we can expect from her for the rest of the year. “All my songs so far have been pretty fun and upbeat and danceable. but this next one is super chill and very emotional. I’m excited to get to show that side of myself as well.”

Moving on to artists whose careers she looks up to, she notes that there are many artists she looks up to but for different reasons. “I don’t think there is anyone who has a better understanding of marketing and branding than Taylor Swift, there’s a reason she’s been on top for so long and I really admire her intelligence,” Sonali explains. “Musically, I’m really influenced by artists like The 1975 and LANY. And it wouldn’t be a real Sonali interview if I didn’t bring up John Mayer somehow, he’s just the ultimate when it comes to songwriting in my opinion.”

On top of getting to create authentic music, Sonali looks to also be an example of positive Indian-American representation in American media. “It’s so incredibly cool, and really shows you the power of social media,” Sonali says about having fans overseas including India. “I’ve only played shows in the US, so the fact that significant parts of my fan base are in places I’ve never even been to is amazing. India, of course, holds a special place in my heart, since that is my heritage. A huge motivator in me doing this is because there is such little representation for Indian-Americans in the entertainment industry, so to have their support and know what I’m doing means something to them is everything.”

Close Enough is available on all music platforms.

The up-and-coming actor discusses the jump from theater to television, “On Becoming a God in Central Florida”, and the advice he got from some cast members.