In the upcoming indie film, Growing Up Smith, 14-year-old Roni Akurati will be known as Smith Bhatnagar, a young boy adjusting to life in America in 1979 when his family moves in order to live the American Dream. The film has already been highly praised at film festivals winning awards such as the Best Picture Audience Award at the Woodstock Film Festival in 2015 and Best Narrative Feature at the CAAMfest 2016.

Roni’s character Smith falls in love with his next door neighbor, Amy, and finds himself assimilating towards Western culture and drifting from his Indian heritage much to the dismay of his parents. 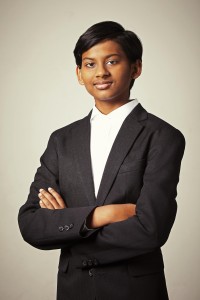 “When Growing Up Smith was being cast, I was in India at the time,” the Chicago-native says about how he got involved with the project. “In order to do my audition, I had to do a series of video calls with the director and producers. A couple of weeks later, I flew to Los Angeles to do a screen test with Brighton Sharbino who plays Amy. That was the final audition before I got cast.”

As Smith tries to woo Amy and adjust to this new life, he keeps a positive and hopeful outlook on life that Roni finds joy in playing, “My favorite part about playing Smith is how optimistic he is and how he is sometimes clueless. It leads to some very funny moments, which were the most fun to film.”

“Smith and I are both optimistic,” Roni explains about the similarities and differences between him and the character. “We both have Indian parents that are strict, especially about school. However, Smith’s parents are much stricter than mine, and they put a lot of pressure on him. They plan out Smith’s life and he just has to obey.”

Anjul Nigam, who plays Roni’s dad in the movie, serves also as a producer and a co-writer with him taking experiences from his own life in the story. “Anjul helped me a lot with knowing what Smith liked and what he was like. He told us stories about him as a kid and how it is represented in the film.” Having Anjul there helped to guide Roni with how he wanted to portray the character, “It helped me understand Smith more since he likes a lot of things that were wildly popular in America at the time and he wasn’t as interested in Indian things.”

Before booking Growing Up Smith, Roni performed as Mowgli and Tiny Tim in the Goodman Theater productions of The Jungle Book and A Christmas Carol. “With theater, everything is in one go and you do the same thing over and over again. There are a lot of rehearsals because on stage, everything ahs to go well,” Roni compares the two. “However, in film, we often rehearse just before filming. We do it over and over until it becomes perfect and the director has all the angles he wants. After that, you never repeat that scene.”

“My parents are incredibly supportive but they also make me remember my culture and what I have to do in order to continue acting,” Roni says when asked about how his parents are helping him set his goals and get through in the industry. “I set my goals naturally and they are usually very broad goals. I have set and reached for goals such as wanting to star in a movie.”

Currently, in Los Angeles, Roni recalled some of his favorite things about Chicago and memories with his family. “In Chicago, I love Millennium Park and Soldier Field. I have very special memories with my family at those two places,” he reminisces. “We often go to Millennium Park, especially when other family comes to visit. I am a huge football fan and a huge Chicago Bears fan. The day that I went to a Bears game is a day I will never forget.”

You can stay up to date on all things Roni Akurati by following his Twitter and Instagram accounts.

Get Ready To Catch April Kry

Some of the best surprises in life come in the most unexpected packages. A quick glance at country singer April Kry, one would assume…