Let’s be honest, everyone loves a good cult classic, especially a fun, cheesy comedy. Wet Hot American Summer debuted at the Sundance Film Festival in 2001 as a satirical romantic comedy directed by David Wain (They Came Together, Role Models). Taking place in the fictional Camp Firewood, the story focused on a group of camp councilors attempting to live it up on the last day of summer camp.

Featuring a group of current comedienne faves such as Amy Poehler (Saturday Night Live, Parks and Recreation), Elizabeth Banks (The Hunger Games, Pitch Perfect), and  Paul Rudd (Clueless, Ant-Man) the announcement that Netflix would stream a prequel series this Summer sparked excitement from fans. Set to begin streaming July 31st, Wet Hot American Summer: First Day of Camp is going to be an eight episode miniseries taking place on the first day of summer camp with the original cast reviving their roles and playing the exact same age as before, despite the real life fifteen year age difference in production.

Thirteen-year-old Hailey Sole plays the role of one of the new campers Amy. “She’ll definitely go through some ups and downs…it’s a very funny role and I’m really happy with how the character developed,” Hailey explained excitedly over the phone. She described Amy as “one of the nicer characters” stating that she was pretty innocent, something she can relate to herself, “I think I’m so much like that because I try to make a point to be friends with everyone and so does my character.” 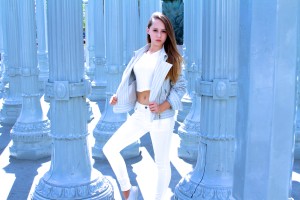 “Honestly it was a great set, it was a lot of fun. Everyone was always cracking jokes and being super funny,” Hailey revealed about the vibe on set working with so many comedic talents, “It was it an honor to be a part of the cast.” About working with the cast in particular, She revealed that the actors were just as humble as we hoped for them to be, “They really made a point to come up to and talk to all of the kids, be really nice, and just interact with all of us…It was just really interesting to just like hang out with them.”

She even managed to give us a minor hint at something to look forward to when watching the show, “I can’t really share too much, but there’s this one scene where an actress has to dress up,” she laughed before continuing, “I can’t say too much but once you see the show you’ll definitely know what I’m talking about and it’s really funny.”

Before joining the Wet Hot set, Hailey had already worked with Amy Poehler on her network show Parks and Recreation playing the role of Tina in the season five episode “How a Bill Becomes a Law.” As a fan myself, I couldn’t help but ask her if Amy really did carry the ‘maternal’ role I often heard her costars crediting her with to which Hailey responded definitely, “when I worked with her on Parks and Recreation, for example, she came up and introduced herself to me which, you know, she didn’t have to do because she’s, like, really famous. She’s really nice and always made a point to like come up and make jokes and play with the kids and laugh. She always interacted with us and that kind of means a lot because it made it really fun on set.”

Aside from her comedy work on Wet Hot, Parks and Recreation, and The Middle, Hailey plays the role of Meg Callahan on the crime drama Criminal Minds. She described the sets to be pretty similar describing the emotion on the set of a drama to be much more deep on camera rather than off, “After the director calls cut, everyone is joking around so there’s not really that big of a difference. I guess the biggest difference is that in the comedy it’s always fun and always joking and improv and stuff, but for more serious roles there’s laughing on set, but what you get on camera is all deep emotion.” Which is a good thing for Hailey considering she herself not only enjoys watching a wide range of television shows, but working on them as well, “I’m fine working on any of them, they’re pretty great, whatever comes my way I kinda just take,” she laughed.

Hailey even managed to tell us about her own audition process, “I used to get nervous, but I don’t really get nervous anymore.” Her voice had a hint of determination as she described how she got over her fear, “I’ve kind of realized that a lot of auditions will come and sometimes you’ll get rejected. It’s just the nature of the game, it’s just what happens, so basically, I go on an audition and I say ‘you know what? I’m going to go in, I’m going to do my best, and if I don’t get it then they’ll be other opportunities,’ so that’s kind of like my mindset.”

While having tricks for taking on her auditions, Hailey also has tricks for experiencing her childhood. She goes to what she calls “regular school” and is able to keep the peace with her nonacting friends because they don’t face any type of competition against each other for roles. “Acting is kinda like a sport for me,” Hailey added, “I go to school and hang out with my friends and on the weekends we go to the movies and the mall. I just make a point to have other distractions in my life and not just focusing on acting because I guess acting can be pretty demanding and it’s good to have other stuff in your life. I definitely salvage my life with that.” When she’s not hanging out with her friends or working on shows, she’s probably watching shows along the lines of Pretty Little Liars, The Fosters, and The Walking Dead, a few shows she listed as “binge-watching worthy.”

With a fun cast and already a fun original material to go off of, Wet Hot American Summer: First Day of Camp should no doubt be added to your summer binge watching when it’s released. The original film is already streaming on Netflix if you want to see all of your favorite comediennes as adults playing awkward and angsty 80s teenagers in true early 00’s score and feels.

You can stay up to date on all things Hailey Sole by following her Twitter and Instagram accounts.

“The Kicks” and Philanthropy of Gabe Eggerling

When introduced to Gabe Eggerling, a young actor on the brink of his teen years, it’s very easy to tell that he’s one-of-a-kind. His…