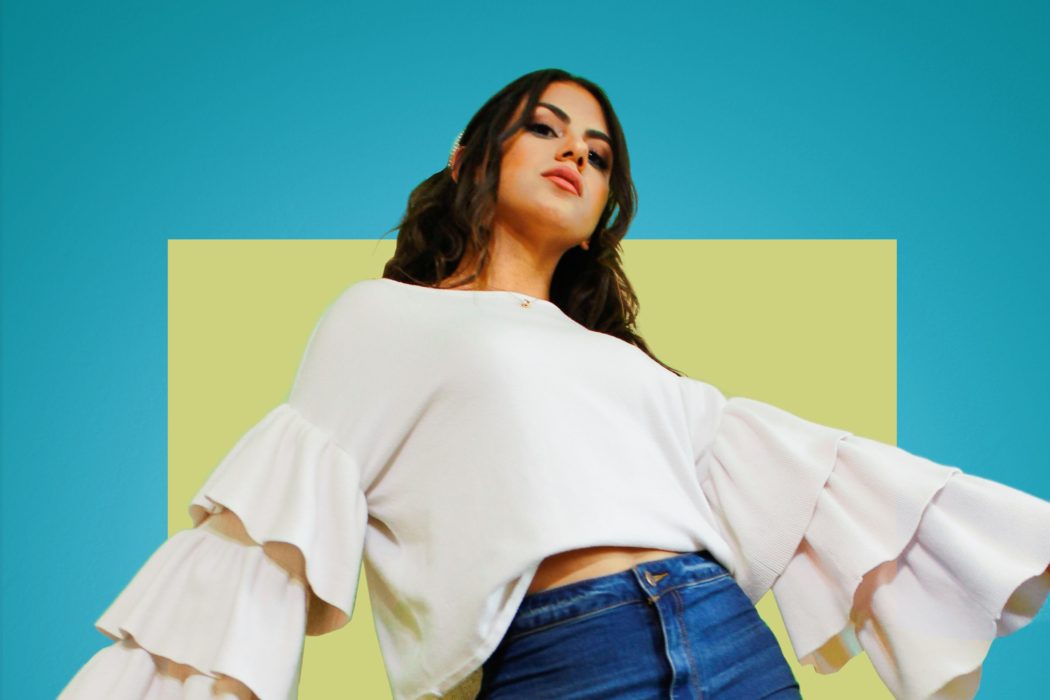 The actress discusses her role on AppleTV’s Little America, her experience filming, and more!

In a time when nearly every company and network is dipping their toes in the idea of their own streaming platform, Apple seems late to the game. Though some may view Apple’s own streaming service AppleTV as a latecomer to the field, given they’ve long been a venue to purchase and rent outside television shows and movies for more than a decade, they set their footing in a strong and diverse environment.

One of the shows available to AppleTV subscribers now is Little America, an anthology series that follows the stories of various immigrants and their experiences in chasing their dreams in America inspired by the real tales as featured in Epic Magazine.

Jearnest Corchado stars in the episode “The Jaguar” inspired by American professional squash player Reyna Pacheco. Living as an undocumented immigrant in California presented Reyna with plenty of challenges and she felt her life closing in on her amongst all her anger. Then squash gave her a focus and changed her life.

“I did [research], I read the article on Epic Magazine. I also saw the YouTube video Making A Champ: Reyna Pacheco Fundraising Campaign which helped me get more familiar with her essence,” Jearnest says of how she approached the project. “But I also wanted to bring my own vision to the character as well. The director and I got to talk about her story and together we tried to focus on bringing her essence yet finding the uniqueness of Marisol.”

I think the stories are very beautiful, heartfelt, and authentic. I thought, and still think, this was an amazing idea – it gives a voice to the stories that are often forgotten within the immigrant narrative.

Marisol is the character inspired by Reyna in Little America. Much like her real-life counterpart, Marisol is struggling in school, starting fights and feeling lost while her brother works construction and her mom cleans houses. In an effort to get free new shoes that she needs but cannot afford, Marisol joins the squash team. 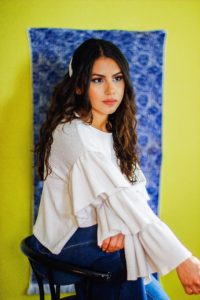 Jearnest brings an earnestness and warmth to a complex character who struggles to find a footing in who she is and what she wants in life. Discussing her character, she says, “I would describe Marisol as a very strong, caring, determined, and resilient young girl. Kind and wise beyond her years. She is a protector; she always takes care of her family and friends and wants to make them proud.”

Throughout her episode, Jearnest can frequently be seen running the court, hitting a ball with such fierceness and determination viewers can practically feel the wind of the hit fly past their face, and diving to make a shot in an unwillingness to not give her all in the sport. The actress trained for four days prior to shooting, something she thrived in and loved.

“[Training] was a bit of a challenge but I truly fell in love with the sport and was really excited every time I had to train,” she enthuses. “I wish I needed to train still,” she adds with a laugh. “I need to find a coach over here!”

Throughout the episode, Marisol’s relationship with her family is vital. She accompanies her mom to clean houses of the rich, which later creates an awkward situation in which she handles in a way that might be one of TEENPLICITY’s favorite moments ever, her brother dropped out of school to help make an income to support the family, and Marisol finds herself stuck with what is expected of her. Her drive for school is practically gone and her anger at the world, racism, unfair treatment, and more are starting to takeover and causing her to fight at school.

Through it all is the support of her family, especially her mother who wants her to be happy and succeed with a great life. The portrayal of the different dynamics of the family and how they communicate with each other struck a chord with many viewers, including Jearnest herself.

“That’s hard!” she admits with a laugh when asked about what parts of Marisol’s story resonated with her most. “She has so many parts of her and her life that I love and relate with. Especially her relationship with her family – I think it’s very similar to my own relationship with my family. They are very united, loving, trusting, and filled with a lot of respect.” Another aspect is the fierce nature within Marisol. “What also resonated with me was how driven and determined she was. She worked so hard to become a professional squash player and that journey is very similar to my journey with acting,” the actress explains. “I think we are both hustlers, determined, and perseverant with our dreams and what we want in life.”

Connecting with that part of her character was easy. “Working with my amazing cast and crew [was the easiest too]. They made me enjoy every second of it. I loved my castmates, they were amazing!!” she gushes happily. “Truly wonderful actors.” What was the hardest? “Most difficult was probably learning how to look like a professional squash player,” she admits with a laugh.

All her joy and pride regarding Little America is evident on her social media pages as she reflects fondly on the experience and gets thrilled at all the positive reactions she’s been receiving from audiences and critics.

Having a team that trusts you and guides you in the right direction is everything!

“I love that people are getting inspired by it!” Jearnest says of the responses to her episode and the series in general. “They are so happy with it and have told me how much they laugh and cry. I am really loving Twitter now! You get to read what people are saying and I’ve only seen positive reactions. It makes me really happy… people love Marisol and her story! They love how big of a dreamer she is.”

While her episode is continually praised as one of the strongest of the series, critics have been split regarding their feelings on the show as a whole. While some feel the series shows uplifting stories about overcoming adversity as an immigrant in America, others worry that the show glosses over deeper issues in order to play to a naïve audience who are more than likely unaware of the different immigrant experiences and challenges.

For Jearnest, she finds Little America to be refreshing. The actress was born and raised in Puerto Rico prior to moving to California as a teen to further pursue acting. She reflects on her own experience as an immigrant and appreciates the positive outlook the show puts a spotlight on. “I think the stories are very beautiful, heartfelt, and authentic. I thought, and still think, this was an amazing idea – it gives a voice to the stories that are often forgotten within the immigrant narrative.”

She continues, saying, “This series is fresh, unique, and it’s exactly what we need right now. It humanizes us immigrants, and it portrays us as complex, layered, beautiful, driven, and charismatic people with big dreams and aspirations. Very rarely do we see ourselves so beautifully portrayed.”

When it came to her audition for the AppleTV series, Jearnest found herself in the midst of a unique process as well. The process was pretty amazing, according to the actress. “A very rare process too. I submitted a self-tape and then they gave me a callback and I self-taped the callback audition as well. Then the last stage I think was a Skype call with the director, Aurora [Guerrero, 13 Reasons Why, Mosquita y Mari]. After that conversation, I got offered the role.”

Receiving the call that she was going to be in the series was an experience she will never forget.

“I think I was home – I was in shock and super excited!” Jearnest remembers of the day she got the news. “I got offered the role on a Monday and had to travel to New Jersey on Wednesday. And we started squash training on Thursday. It all happened super-fast, so I don’t think I had too much time to soak it all in.”

Looking back at the whirlwind of the entire experience, the actress gained more of an insight into who she is as a person and as an actor. 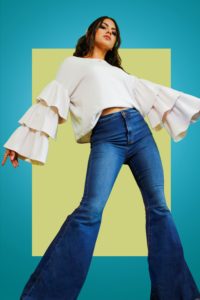 “I learned that I truly give my 100%, that I’m a hard worker, that I strive more when I’m trusted and have a team that listens and supports me in the process,” Jearnest begins. “I learned that I love working with directors like Aurora, directors who are talented and are good communicators and believe in me. Having a team that trusts you and guides you in the right direction is everything!”

The physical aspect of filming impacted how she approaches acting. “I also learned that I love doing stunts and athletic things. I truly love having to train for a role and being physically active. I would love to keep doing roles like this one. They’re fun and challenging!”

Going forward, Jearnest wants to carry that energy with her. “I hope to work on even more challenging roles, and I would love to work with A-list directors.” She also knows who she’d love to perform alongside in the future as well. “I would love to work with actresses like Jennifer Lopez, Gina Rodriguez, Salma Hayek, Penelope Cruz, Jennifer Aniston, Reese Witherspoon, or Sandra Bullock… I dream of working with actresses like that that I’ve admired all my life.” Another of her goals is to keep the joy and pride she has for the projects she’s recently worked on. “I want to work on projects I am passionate about with talent that I can learn from and keep growing.”

One of her future projects is film titled Raise Your Hand. “RYH is a coming-of-age drama based in the ‘90s about two girls who are trying to figure out life while also finding their voice in an incredibly poor and unjust neighborhood.” Jearnest describes the movie, “It’s a very impactful film, very complex and thought-provoking. One of the best projects I’ve had the pleasure of working on. I hope we get to find a home for it soon.”

In addition to Raise Your Hand, the actress also has a comedy series titled Sneakerheads. It’s about sneakers and sneaker addicts, according to the star. “I got to work with Allen Maldonado [black-ish¸ The Last O.G.], Andrew Bachelor (King Bach) [To All the Boys I’ve Loved Before, The Babysitter], and Matt Josten [Meet the Robinsons, Chicken Little] among other talents. I think it’s very funny and different. I hope sneakerheads all over the world get to watch it and love it as much [as] I do.”

Little America is available for streaming now on AppleTV!

Teddy Edwards Tells You His Name

Based in New York City, young singer-songwriter Teddy Edwards is gearing up to release his debut EP this year. Having already released his single,…