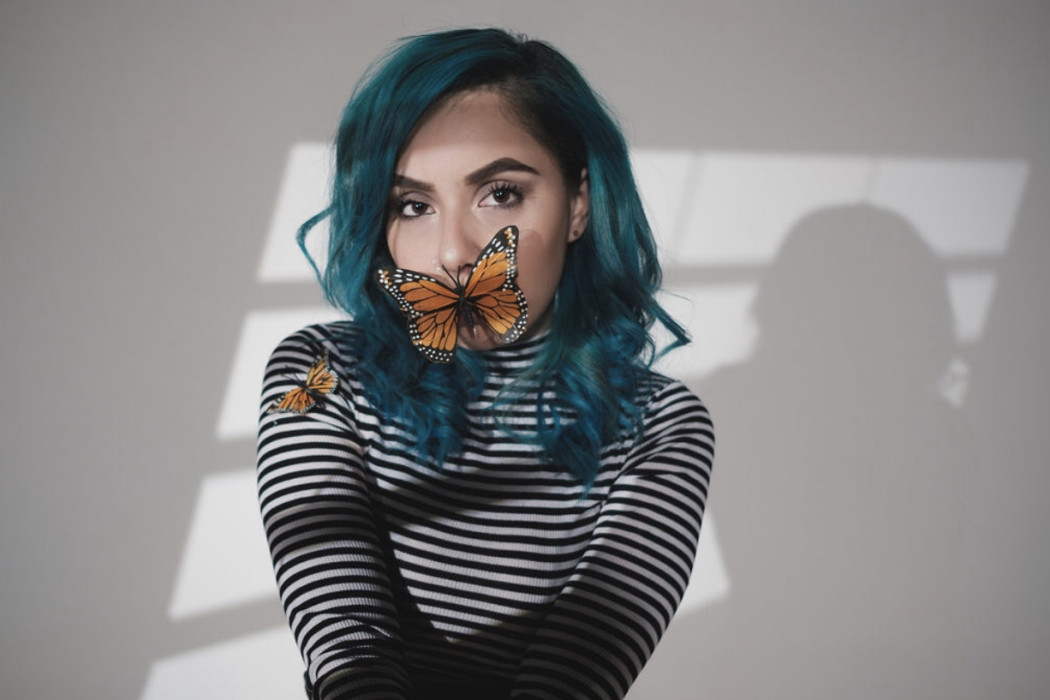 Jessica Morale’s social media bios describe her as a music maker and songbird. And like her music, she invites people to see the “inner workings of her mind.” Since the age of 4, she’s performed in choirs, musicals, and talent showcases growing up in South Florida. Just as her music is made through an honest and passionate lens from having such dedication to this craft since childhood, Jessica comes across this way through her answers too when we talk about her music, herself, and finding her place.

In her latest single, “Hunter,” the alternative artists’ voice and melody build like that of a wave in a storm as she reclaims her agency and personhood. “I think as women, we’re taught to please. We are taught to be subservient, obedient, and we’re supposed to smile,” she says. “Too often we find ourselves neglecting our own happiness to please others in the need for acceptance. We put our souls upon a shelf and hide it away, neglecting ourselves in the process. I wrote ‘Hunter as a reminder to not give a damn about what others throw at you.”

She delves in further about the song, “It’s about releasing toxic relationships that no longer serve you and learning to love yourself wholly in the most badass way.” Despite the confidence that can be felt in the song, Jessica notes that she’s still learning how to do this.

The single cover features a delicate butterfly on her lips and spreading its wings that juxtapose the rest of the cover design and the connotation of being a hunter. But, once listening to the song and how Jessica identifying as the hunter makes her empowered, you realize that the focus is on what butterflies are known best for–transformation and growth.

I wrote ‘Hunter’ as a reminder to not give a damn about what others throw at you.

“Hunters are smart, quick, and stealthy. But they don’t start off that way,” she begins about why she chose a ‘hunter’ to channel her growth. “During this past year, I slowly learned that a lot of the people who I thought were friends were ‘fake friends’ or didn’t have my best interest at heart. Like a hunter, I now tread lightly and be cautious of who I let into my life. The concept of becoming a ‘hunter’ is about being the prey and slowly becoming the predator–it’s about trusting your instincts.”

Jessica manages to show confidence through being cautious. “If someone or something is making you feel terrible about yourself, it’s important to trust your gut and know that you don’t need the approval of others to make you happy,” she advises.

With a visual for “Hunter” already in the works–which she teases will be her most visually stimulating and interesting one yet–Jessica’s current aesthetic seems to intentionally be meant to show how she’s transformed while also showing how she has yet to reach her final form. “I change my look a lot because I am forever changing. I’ve had my hair red, pink, magenta, and now blue, which I think is one of my favorite colors yet,” she exclaims.

“‘Hunter’ takes a step in a different direction into a much darker, mysterious, and ambient sound as opposed to my previous releases.” With this turn into a new era of her artistry and life, Jessica declares that blue reflects how she’s feeling in this time of her life, “Blue can be calming like a clear sky. Blue can be reflective of sadness. Blue can be deep and mysterious like the ocean and its abyss of secrets. Blue can be reckless like a stormy night. The color blue can be many things, just as I am a complex and forever evolving individual.”

I’d hope my younger self would feel inspired and empowered to do and be anything when listening to my music.

Her aesthetic and look can also be attributed to the fact that she grew up listening to alternative, emo, and metal music. Along these genres, she credits Evanescence, Nirvana, Linkin Park, Alanis Morissette,  The Runaways, Lady Gaga, Marina and The Diamonds, Tove Lo, Billie Eilish, and Halsey as some of the artists whose careers and work helped her realize she could be herself in her music and her look.

“I’d say my style is a mix of vintage, grunge, and glam,” Jessica says. Which not only shows but also defines how her eclectic and multifaceted music tastes and influences also extend to her fashion sense and expression, “I dress how I feel, so some days I’ll dress super girly while other days, I’ll dress super gritty. It all just depends on my mood.”

Still, Jessica acknowledges that her music can come off “more ballsy” than she is in person. “I’m super outgoing, strange, and clumsy in person. I consider myself pretty outspoken about issues I am passionate about, but I seldom get into confrontational circumstances if I don’t have to,” she makes the distinction between her as an artist and her in her personal life. “Sometimes I’d rather sing about how I feel rather than speak it out loud,” she adds.

For someone who has been singing for as long as she can remember, music has clearly always been a form of communication for her. She’s also noted in previous interviews how the music in her life and songwriting is therapeutic. “I knew I wanted to pursue music when I started performing my original songs,” she explains. “There’s no other feeling like telling your story and someone resonating with you. Nothing fulfills me like music does.”

“I think it’s important not to overthink and just write. I’m not afraid to be vulnerable to a certain extent, but there are plenty of things that I’ve written about that I haven’t had the courage to share with the world yet, not because of fear of rejection or public opinion but in part of the fear of being vulnerable about certain issues. I consider myself an empowered woman, but I am also someone who can be very insecure,” Jessica opens up about opening up.

This sense of self-awareness only goes further as she notes that the themes behind her songs can be interpreted as sharing her experiences while also being aspirations and reminders. “I think the reason why I always write empowering songs is that I’m constantly trying to give myself this sort of pep talk,” she explains. “‘I can do this. I’m worthy. I am enough.’ I’m learning and growing every day and this year, listeners can expect a much more vulnerable side. I’m not overthinking anymore.”

A lot of this strength and motivation comes from drive, determination, and a hunger. She shares a lyric from an unreleased song of hers as the lyric that describes her the best. The lyric goes:

“She’s an American girl with an American dream. Wanderess searching for something. Black ray bans she don’t give a damn. She’s got the pumped up kicks, yeah you know she’s out of hand. Oh, can’t shake the fear off her back. Oh, cause she don’t wanna die in Tamarac.”

“It’s all about the feeling of wanting something more. Of knowing you are bigger than this and are meant for something more,” Jessica explains. “It’s about the fear of rotting in your hometown and wanting to do everything it takes to make your dreams come true.” She nods that notion to being relatable not only to herself, but to struggling artists overall.

As a songwriter, her process isn’t pinned down as only one method; sometimes, the song starts out with a chord progression, other times a vocal melody, and other times (such as the case of “Hunter”) her songs start with a lyric. She does hint, however, that her upcoming music–as fitting with the description of her current era–will be a bit darker, yet, more upbeat.

“I’d hope my younger self would feel inspired and empowered to do and be anything when listening to my music. I’d hope she’d be encouraged to trust her intuition and understand that there is beauty in imperfection,” Jessica reflects.

I think it’s less about being accepted by the genre and trying to fit in, but more about paving your own way.

Since alternative pop/rock music found its way onto the scene, the influences of women and/or people of color have always been prominent while the groups rarely receive their dues. Instead, their music and image can get misinterpreted. Such as artists like Fiona Apple and Alanis Morrisette bearing their souls in their music being reduced to bitterness or “women being emotional” in the 90s because they were young women. Or the artist is assigned with a more “conventional” genre based on their appearance. Case in point: most Black and Brown artists making alternative music.

Jessica notes that she, fortunately, hasn’t experienced sexism from being an alt-pop/rock artist, but she has dealt with industry people attempting to take advantage. “I think it’s typical of any woman being in the music industry. We’re still viewed as less than our male counterparts. People think ‘there’s no way she could’ve written that.’ We’re viewed as objects and sexual machines rather than human beings. But slowly there is progress being made,” she starts when I ask her about music getting to be a place where she brings in her artistry and personhood.

“There are so many amazing women in the industry that are making dope music and breaking boundaries,” she praises. “Alternative pop and rock music most certainly is a predominantly white space. I feel there is a definite lack of representation in the mainstream, but if you take a closer look at upcoming and new artists, there are more and more women and men of color making alternative pop music. I think it’s less about being accepted by the genre and trying to fit in, but more about paving your own way,” Jessica explains revealing that she has hopes to make an alternative pop track in Spanish to honor her Latinx roots.

Since it’s Women’s History Month, we discuss more the women that she’s inspired by where she immediately sings the praises of Lady Gaga. “She is a true artist in every form, and throughout her career, she has continuously used her platform to be a voice for mental health awareness and is a change agent in every sense of the word,” she says.

Being inspired so much by Lady Gaga and other artists who have inspired her to be herself and include her honesty into her artistry, Jessica shares that her goal is to do the same for other girls, “With my music, I hope to inspire girls to be their authentic selves, to love themselves, and to not settle for anything less than they deserve.”

Jessica Morale’s Mini-Playlist for Readers [Listen Here]:
Love It If We Made It by The 1975
Break The Rules by Charli XCX
Savage by Lights
Top of The World by Kimbra
you should see me in a crown by Billie Eilish
Happy by Julia Michaels
Control by Halsey
Okay, I Believe You, But My Tommy Gun Don’t by Brand New
Cherry Bomb by The Runaways
Downtown by Allie X
Guys My Age by Hey Violet
disco tits by Tove Lo
Human Behaviour by Bjork
California by Yungblud
Baby Came Home 2 / Valentines by The Neighbourhood

Hunter is available on all platforms you buy or stream music.