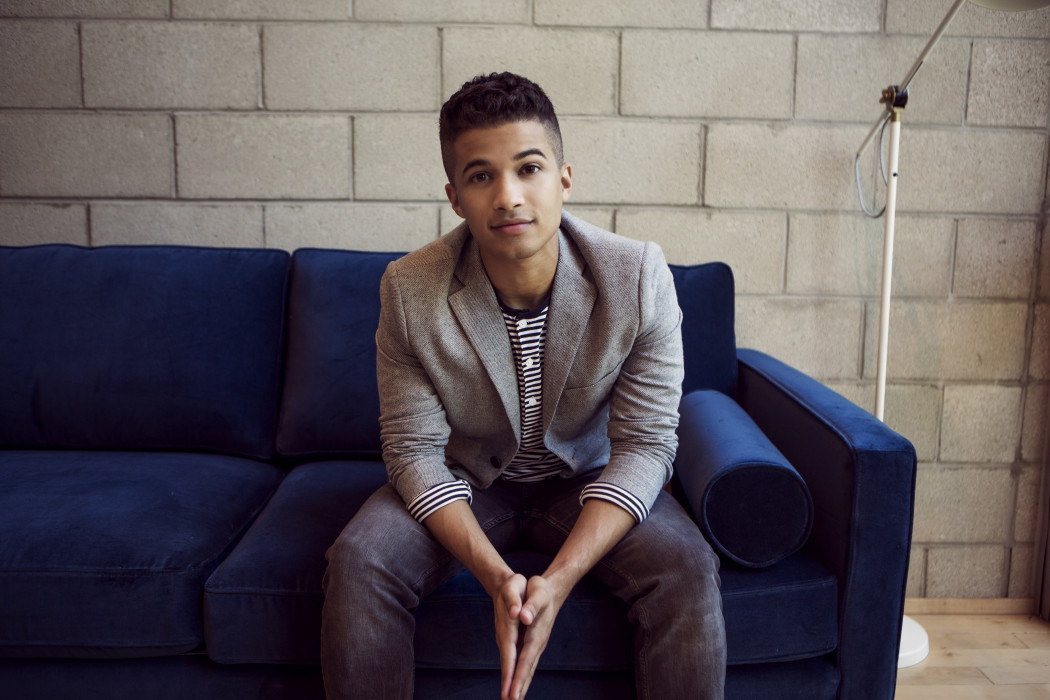 Two words to quickly describe 21-year-old Jordan Fisher would probably be “thoughtful” and “soulful”. But, of course, just like everyone there is much, much more below the surface; from Alabama native to a performer of the arts to Basketball fanatic to lover of the television show Friends and so on. During his lunch break from rehearsing on the upcoming musical Grease Live, I got the chance to talk to Jordan over the phone about a few of these interests, some of his music, and of course, the electrifyin’ grease lightin’ spectacular of the year. 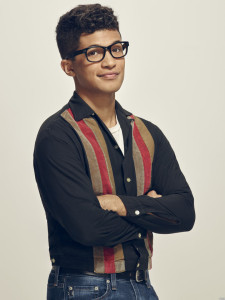 This Sunday, for three hours, live on television, Jordan will be known as Doody in FOX’s production of Grease Live. Musical Spectaculars, originating in the 1950s on NBC, are now making a comeback, especially with NBC’s hit The Wiz Live! that aired in November. FOX is now joining the fellow broadcast station with Grease as it’s first ever live musical.

“It’s a lot of hours,” Jordan laughed when I asked him about what the cast does when they find themselves getting tired. “It’ll be about nine weeks of production around the time that the 31st gets here. It’s insane to think about how we have done nine weeks of production for the three-hour window that you’ll see happening live and in real time on television.”

Performing a musical live on national television does involve a lot of hard work, in some ways, it’s done like a stage play in terms of the delivery, performance, aesthetic, and the fact that it’s live. But, it also follows the lines, rules, and cues of television. “It requires basically perfection in every sense of the word and just as well human beings can do that so, you know, I think having the kind of general energy and dynamic we have as friends and as a cast has been very motivating in keeping our stamina up, but I think the hectic and the apprehension of doing the thing 100% live and I think having the honor of being able to reintroduce Grease in this format is just another kind of shot of caffeine for everybody.”

The other trick to avoiding exhaustion working those long hours? Coffee. “I cannot stress that enough just tons of coffee,” Jordan laughed. “And taking the time to rest,” he added on. “Just knowing that when you have downtime you pace yourself and get as much rest as possible, you know, as much as you possibly can. This is a cast full of very talented, different people and if I’m not on set I’m either at a fitting or I’m at a meeting with my label getting ready to push music and all that, but that’s for everybody, everybody has multiple projects going on at one time so it’s challenging.”

While the cast may be working hard and feeling put to the task, Jordan notes that there is a feeling of gratefulness and excitement that makes the positives far outweigh any negatives, “It’s easily the most challenging thing I have ever done and that we decided as a cast that any of us have ever done. But, it’s just as equally fun and equally exciting and equally fulfilling so I’m excited for everyone to see what we’ve been up to.”

Jordan assures that through the process of creating Grease Live, fans should not fear too much about any dramatic changes, “There really aren’t a lot of changes, I mean the story you’re going to be seeing is essentially the broadway production with elements of the film that everybody loves and knows well.” That doesn’t mean the show itself is not going to be unique. “This is kinda its own version of the show between the ethnic diversity of the cast to the general energy and approach to the characters,” Jordan continued. “I’m playing a Doody that nobody has ever seen done, Aaron (Tveit) is playing a Danny that nobody has ever really seen done, and Carlos (PenaVega) is playing a Kenickie that no one has ever really seen done so on and so forth.” 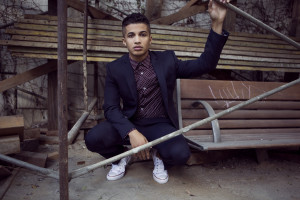 He explained how their goal is to reintroduce the beloved story in another format in their own special way. With this, Jordan will be singing a song from the original Broadway show titled, “These Magic Changes.” Keke Palmer as Marty will sing “Freddy, My Love” and Carly Rae Jepsen will be singing an original song written by Tom Kitt and Bryan Yorker.

“Just, kind of, what the entire experience will encompass is probably my favorite part,” Jordan laughed closing in on his response to me asking about his favorite change that they were bringing to the production.

Anyone following any of the cast on social media can witness the bond that they have all developed while working together. He’s been honored to work with, and become close friends with, someone who was a part of something that inspired him to get into television and film. It’s no secret that High School Musical made a cultural impact amongst the millennial generation, arguably similar to Grease’s. However, for Jordan, meeting Vanessa Hudgens was as normal and warm an experience as it could get when meeting during production for a live televised musical. “She came in, kissed my cheek, and said ‘Hey, I’m Vanessa’ and just sat down and started talking about her dog, family, and friends, and where she just got back traveling from,” he recalled about their first meeting. “We just immediately became friends very quick it was almost like it wasn’t really an introduction. She kind of just sat down next to me in the makeup trailer and it was like we were friends for years.”

He also knows a thing or two about being a part of a popular Disney Channel musical. He played the role of fun, surfer dude Seacat in Teen Beach Movie. “None of us had a crystal ball, none of us really knew how big the film was going to be, either of them, and we didn’t really know what the fanbase was going to do afterward. But, upon it coming out it came kinda clear pretty quickly that it made an impact,”  he spoke about the idea of there being young fans inspired by the films. “The idea that I could have potentially been a part of a project that may have inspired some kid that maybe I’ll work with ten years from now is a pretty incredible thing. My telling Vanessa that was a pretty cool moment, I think, in our friendship.”

While he admitted to not having any fanboy moment when first getting to work with Vanessa, Jordan can understand the hype and pull of being a diehard fan of someone. For him, it’s Golden State Warriors point guard Steph Curry.

“I’m a huge basketball fan, huge NBA fan, I would flip my everything if I met Steph Curry. When I meet Steph Curry, I don’t even know what I’m going to do. I was close to meeting him a couple times. I just think they’re superheroes, honestly. I mean, I love basketball, I love the sport, I love watching it, I love playing it, but I’ll never be able to play it at the level that they do. Like that to me is just…insane.”

Signed with Hollywood Records, Jordan has also been incredibly busy with working on his debut album. “The album is pretty much done at this point which is kind of insane. I just had an entire day with the label talking about what I can and can’t say,” he laughed. He can’t currently confirm much but, he was able to give announcements that are potentially in the works. “I’m excited to potentially announce that there might be a couple cool collaborations. I’m excited to potentially announce that you may be hearing something very soon, as in like very, very soon. I’m excited to announce that possibly I may be coming to a city near you, also soon. But those are all possibilities at this point,” he clarified.

While Jordan began his start in Hollywood in an episode of iCarly called “iSpeed Date,” Jordan originally received his start as a part of the Red Mountain Theatre Company in his hometown of Birmingham, Alabama. Jordan grew as an artist finding his talents and passion through music, acting, and dance. We talked for a bit about how coming from Alabama helped shape who he is now which he was more than appreciative to discuss. “You can’t replicate what kind of roots you get coming from the South. I’m coincidentally friends with a lot of people from the South. I’ve got a band full of friends from Tennessee,” he mentioned one of his longest, closest, and best friends Olivia Holt. “It’s just a different kind of mentality, just a different approach to life and people and I’m really glad I got my roots from there. I’m super grateful that my family ended up moving out to LA as well so, LA is very much home to me at this point, but I’m very, very proud to be from Alabama.”

Before having to hurry back to a fitting for the show, we discussed where he hoped to see himself in five years, “Where my personal life is concerned, it would be awesome if I found that special girl and was married and have a nice house somewhere in LA that we both love or what have you. Where my work is concerned, I mean happy really. For me, that’s making music and that’s making films and traveling and doing Broadway, you know. I mean, I’m an entertainer through and through,” he added closing out, “and I want to do that for the rest of my life.”

You can stay up to date on all things Grease Live by following their Facebook and Twitter accounts. Grease Live airs on FOX this Sunday 7/6c.

The Resolution – House of Blues Chicago

Check out these pictures from The Resolutions concert at The House of Blues Chicago on 7/27/14!