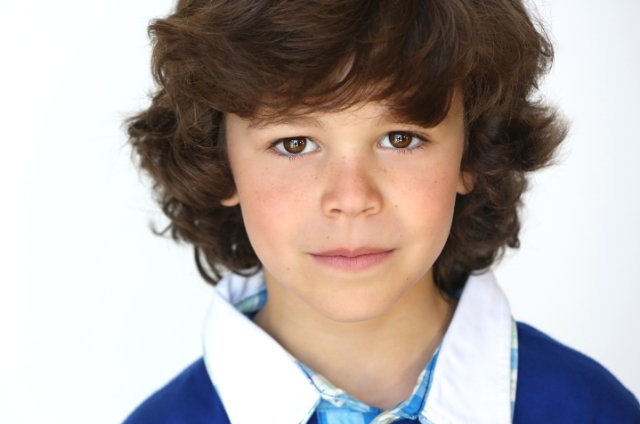 The 5th Wave is the newest science fiction film to hit the young adult market. Like similar blockbusters of its genre, the movie is based off of the first book in a trilogy by New York Times best-selling author Rick Yancey.

The film follows Cassie Sullivan [Chloe Grace Moretz] as her life turns upside due to a series of alien attacks that come in waves. When the teenager is separated from the rest of her family, she fights for her life and is willing to go to the ends of the earth to reunite with and save her younger brother Sam.

Sam Sullivan is portrayed by Zackary Arthur, a nine-year-old actor who is about to make a big splash with fans. Featured in the Emmy and Golden Globe-winning Amazon television series “Transparent,” Zackary has The 5th Wave to thank for making his transition to the big screen a great one.

Describing his character Sam, Zackary says, “Sam is a normal kid in a normal family and he loves them so much. We are so much alike in real life.”

Zackary thinks back to when filming began and recalls what he was most excited about, like meeting the cast and crew as well as Rick Yancey, the writer of the series. He also mentions bringing his character to life. “It was really important to me that I played the right character for [Rick] because he wrote the book. I was so excited about everything and since I want to be a filmmaker when I grow up, I knew I would learn a lot and I sure did!”

“I learned a lot by watching everyone and that every single person on a movie set has an important job,” Zackary explains about what learned on set. “The actors, producers, directors, wardrobe, make-up and hair, studio teachers, camera people, grips, lighting and sound people, publicity people, transportation people, PAs and background actors – all make a movie come together. And then the people that go to see the movie are super important too!” He encourages fans to go out to theaters to see the film and says, “I hope everyone will see The 5th Wave, especially on opening weekend because if lots of people see it on the first weekend, we can film the next two movies!”

However, focusing on the first film, he reveals some scenes that he hopes fans will look out for. One involves him, Chloe, and Nick Robinson, who plays Benjamin ‘Zombie’ Parish. “I like the part when Cassie sings to me and when Zombie and I sing a little bit together. I also love all of the action scenes and when Cassie finds me!”

Considering The 5th Wave has a lot of those action and adventure scenes, Zackary was able to participate in the fun. “Everyone was so nice and awesome,” he says. “I did get a few bumps and bruises but it comes with all of the fun action in the film! I loved all of the filming days!”

“Because they don’t film in order, my mom would always talk me through where we were in the film and we would talk about what I would be feeling during that part,” Zackary tells Teenplicity of his preparations for the film. “Sometimes the lines would change and I would need to make sure I learned everything as soon as the changes were made. That happens sometimes. Also, there are parts you learn for extra footage in case they need in. I loved it all.”

The transition from something like Amazon’s “Transparent” to this movie is different in the setup of how things are done and what filming is like. “They are different in many ways but the same in believing that all is true. Filming on location for a long time is one big difference. We did have so much fun meeting families in Atlanta and even spent one of my favorite Thanksgivings with a family that worked on the crew. It was amazing and they feel like a big part of our real family. If we film in Atlanta again, I will invite ourselves over again. They are so nice and the food was amazing!”

Fortunately, Zackary was able to create another family of sorts on the set of the film. Remembering his favorite aspect of filming, he says, “Making all of the friends with cast, crew, producers, directors, and everyone! It was so fun to be a 5th Wave family. They would all joke around with me and tickle me.” Zackary dishes that he is extremely ticklish and somehow, everyone seemed to know it. “I would also dance in my trailer and play soccer and basketball when there was time… Alex Roe [“Evan”] and Jake Yancey are great in basketball and soccer! Nick would let me play on his phone and the other cast members were all just awesome and amazing.”

“Just believe what you are doing and have fun… that was from Chloe and Ron Livingston too,” Zackary reveals about advice he received on set. “I love acting with them and everyone on the film because they all believed everything and it made me feel like it was really happening.”

On what fans can expect in 2016, Zackary says, “Just that I will keep working hard and hopefully you will like the projects I am in!”

To his fans on all of their support, Zackary left this with a big smile, saying, “Thank you for being so nice to me and I love your edits, your pictures, drawings, and the nice posts! I love when you think of me as your little brother! You are all awesome. You are important to me.”

If you want to see fun pictures and talk with Zackary, who loves hearing from everyone, you can reach him on Twitter at @1ZackaryArthur.

The 5th Wave is in theaters now.