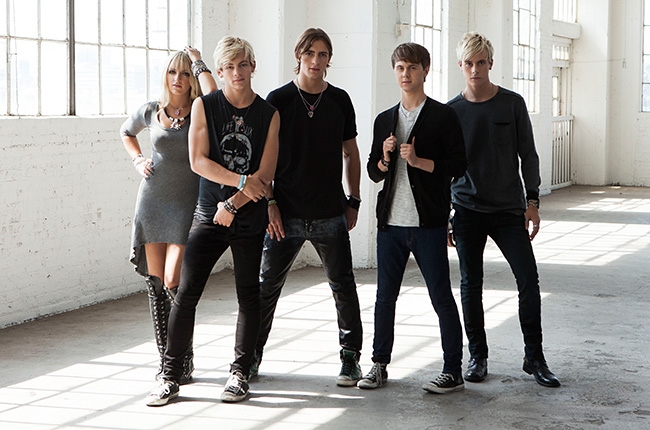 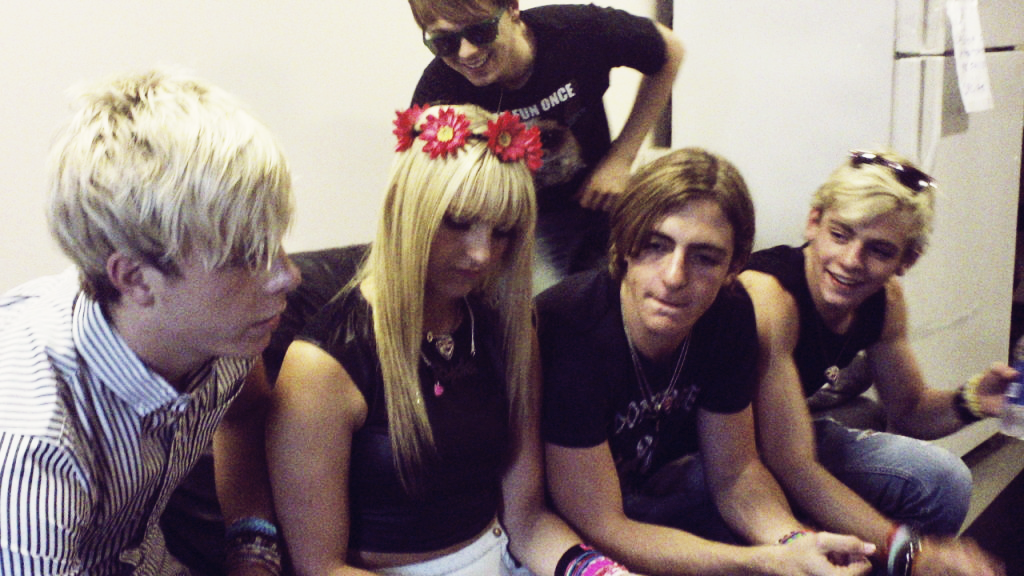 In the midst of R5’s crazy schedules, Teenplicity was able to get an interview with the amazingly talented and extremely humble group right before they went onstage at Rye Playland in Rye, New York!

If the influx of teenaged girls in the area doesn’t tell you enough, their enthusiasm featuring posters, custom made shirts, and even face paint will let you know one thing – a band is in town. Do not be fooled though, because R5 isn’t like many other bands.

The group is comprised of four siblings, three boys and one girl, and a friend; Riker (21, bass and vocals), Rydel (20, piano and vocals), Rocky (18, lead guitar and vocals), and Ross Lynch (17, rhythm guitar and lead vocals) with close family friend Ellington Ratliff (20, drums and vocals). Each one of them passionate about their music, easily seen in their stage presence or simply their voices as they talk about what exactly they do and what music means to
them.

Their joy as they take in every moment of the journey that they are embarking on is evident to anyone who encounters them. No matter how shy you are, a feeling of ease immediately enters your body at each member’s sweet personality and genuine smiles.

Get this dedication to their fans – they even play shows while sick! They never want to cancel a show and while each member has dealt with sickness on the road (Ellington was even sick on the day of the interview!), R5 powers through it just to play a concert for the R5 Family!

R5’s fanbase, dubbed the “R5 Family”, has expanded largely over the past two years, grossing over two hundred thousand followers on the group’s official Twitter account and sold out shows around the world. Fans have developed all over largely due to each member’s wide expanse in the entertainment industry. The entire group had been involved with a dance studio prior to their band days, this studio being where their met final member Ellington, who the band affectionately calls by his last name. From there on, each member has had roles on various television and commercial spots, Riker gaining a reoccurring role as Jeff the Warbler on Fox’s Glee
and Ross hitting it big on Disney’s Austin & Ally ultimately leading to the widely successful Disney Channel Original Movie Teen Beach Movie. Meanwhile, some fans have gathered from the internet. On their official YouTube channel, R5 posts videos called “R5 TV” which shows fans a behind-the-scenes look into concerts or just what they’re doing on a trip.

With success forming from second EP Loud, its worldwide successful tour, and their first ever full length studio album debuting on Billboard’s Top 200 at number 24, R5 has managed to stay grounded.

Walking into their dressing room following the VIP meet & greet which included a sound check, question & answer, and photo with the band, their animated voices echoed against the walls. Jokes were being shared as they settled in, laughing at Riker’s expense, having just eaten a puke flavored jelly bean (a box of “Rotten Jelly Beans” in hand, a gift from a fan).

Quick to inform them of the R5 Family’s enthusiastic response to Teenplicity’s tweets and tumblr postings asking for their questions, the group was honored, shocked, and in awe. Their love of the R5 Family is obvious, as they gave their fans a shout-out before the interview.

“Every time we get something done online, there’s no doubt that you guys are gonna take it over the top!” Riker is quick to say.

Starting off the interview, the band is immediately asked about their first full-length album that they finished recording earlier this summer. Rydel was quick to joke.

“I can tell you one thing,” she jokes. “There’s one song on it called ‘Loud’ and there’s another song called ‘Here Comes Forever.’” Rocky and Ross informed that the four songs from the band’s EP Loud were to be included on the album, plus an additional eight songs.

Here’s a bonus for the R5 Family! R5’s song “Wishin’ I Was 23” that has been included on the set list of their numerous tours will be on the album in the special Target Extended Edition! “‘Wishin’ I Was 23’ is going to be a bonus track somewhere,” Riker says. “I know people will like that. It’s got a little different vibe from how we play it live. It’s cool.”

“It works,” Rocky added on.

R5 had filmed their music video, for their first single off of their upcoming album, entitled Louder, staying up until 2 in the morning to film a few weeks prior. And what did they have to say about? It. Was. Cold!

Despite their lack of warmth, the group agreed that that the process was fun.

“It was the fun-est day of my life!” Rydel says, giggling and bubbling with enthusiasm.

Her younger brother Ross expanded. “It was really cool because we did somewhat sort of unusual things with our band performance on that one which was really, really fun. I was a little bit under the weather though which kind of sucked but it was worth it.”

Riker quickly divulged that they had the same director for this music video as they did for “Loud”!

Although the five of them click perfectly with each other, whether on stage or off, they still have different aspirations for their music in the years to come. Their family bond is apparent as each member can’t help but joke and tease each other, not letting the serious moments last for too long before they replace it with an easy-going, comfortable atmosphere.

“A world tour and to be played on Top 40 Radio. You know, like with Maroon 5 and Neon Trees. To have Ryan Seacrest be on KISS FM, ‘Here’s R5’s new single!’ I think that would be something really, really cool,” Riker dreams of happening.

Ross says as he adds his input, “I think we all have somewhat different goals with our music, which is cool in a way.”

“What’re your goals, Ross?” Rocky is quick to tease, Ross only giving a short laugh before answering.

Rydel, breaking the boys out of their joking manner for a moment, speaks as she points to Riker. “If people like it then we’ll be on his goals.”

Where does the band see themselves in ten years?

“With facial hair!” Ellington says immediately before adding on a more specific feature. “With a mustache.”

“I can finally grow a five o’clock shadow!” exclaims Riker as he jumps on board with Ellington’s hopes. Ross is quick to agree with Riker, excited for the day that will happen to him and thinking it will be cool.

As for Rydel, she jokes saying that she will be at the Bahamas, “On a very long vacation!” Giggling for a moment, she turns slightly more serious, though a smile is still wide on her face. “I see myself with two little blonde babies and a nice family.”

Riker adds on to his answer, saying that he can see the possibility of getting married, or at least close to it.

No worries, R5 Family! Riker and Ross are confident that they’ll still be rocking and putting out albums.

Ellington, the clear jokester of the group with his dry humor and on-the-spot hilarious comments doesn’t even breath before joking, “Nothing,” when the group is asked about the one trait they admire most in each other.

The group laughs for a moment before Riker zeros in on Ellington. “I love that Ratliff is always, always about making jokes. Totally, no matter what, he can joke about anything pretty much.”

“I disagree with that,” says Rocky.

Riker simply continues and moves on to Ross. “I love that Ross is so unbelievably creative. Like he’s always pushing to be different and better than what we did last time.”

Ross smiles for a moment as he points his water bottle in the direction of his oldest brother, stating, “I love that Riker is very-”

“Complimentary?” Ellington interrupts, earning a laugh from the room.

Ending the heartfelt moment, Rydel is quick to point to herself and joke, “My turn. Bring it on, bring it in. Haha!”

Ross speaks immediately while the other boys try to find words to fit what they wish to say. “Rydel has the best work
ethic.”

“I like Rydel’s sparkles in her hair,” Ellington speaks, reaching forward as if to grab one.

“That’s all I have to say about Rydel.”

Riker, Rocky, and Ellington all agree on one thing about Rydel – she “gets stuff done”. Whether it’s yoga at 6AM, doing her makeup on the tour, or making sure the boys aren’t running late, her determination is clear to have the day run smoothly.

While Ross admires the fact that Rocky always has an observing eye and mind, Riker says he thinks Rocky has the best street smarts of the group (earning a joking, “WOAH BRO!” from Ross).

Ellington’s humor returns to the room as he tells Teenplicity that Rocky’s the best “with the ladies”. He jokes, “I really take that, you know? I’m like, ‘Yo, Rock, help me out.’”

Not going to let the moment, Rocky turns to his younger brother and teases, “Yeah. How does that feel Ross?”

“But Rocky’s been having a rough patch lately, man,” Ross retaliates.

“I know. I don’t know what’s going on,” Ellington says, a mock sadness in his tone of voice.

There is rarely a quiet moment with the band, though the few that are encountered are spent deep in thought. When speaking to the group, one feels as if an old family friend, catching up after years of having lost touch. Quick
to involve one in whatever they are doing, there is a sense of equality, care, love, and support amongst its members. No one is placed higher than the other and each person is treated to the same degree.

On stage, each member plays a different role. At times, a role is more prominent than the other, whether it’s a guitar or drum solo, or a quiet moment when only the lyrics of one of R5’s songs is being sung to the crowd. Despite this, each role comes together to create a fantastically enticing mix.

Ross plays as the band’s front man on stage, his charisma and enthusiasm is unique in a way that can rally anyone in for a second glance. Though it is the band as a whole, with their creative dance moves, each member’s swoon-worthy vocals, and clear connection with each other and the crowd that is what keeps a person watching.

If given the chance and R5 comes to your city, be sure to check them!

R5’s debut album “Louder” is available online and in-stores now. Check their website for dates of their promotional tour through October and November as well as in 2014!