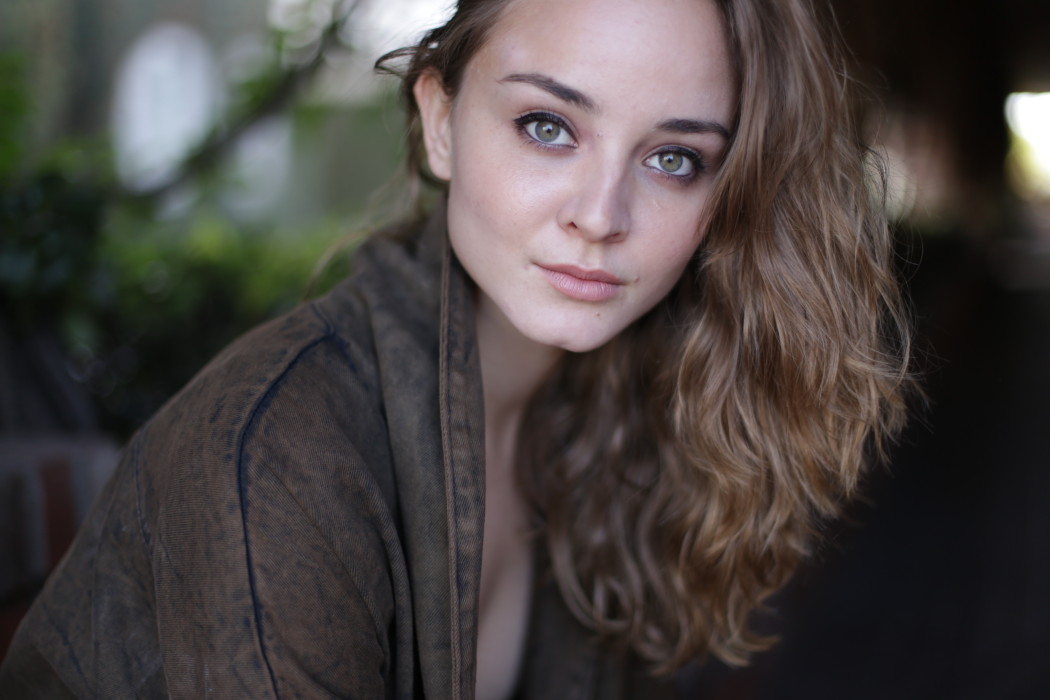 Going on trips to the woods and staying in cabins away from civilization always sounds like a fun summer vacation idea with your friends, right? At least, by cinematic standards if no place else. You know a group of characters is in for the worst case scenario when they get into that car ready to see what the great outdoors has to offer them. All that’s left is to figure out who the killer is going to be and who will survive.

But, what if there isn’t one distinct killer? Or better yet, what if what the group encounters in the woods are Wesley Snipes and an alien invasion? In Mauro Borrelli’s latest project, The Recall, five friends find themselves in the midst of an alien mass abduction during a friendship vacation. Deemed a sci-fi-action thriller, the film focuses on Jedediah Goodacre’s (Disney’s Descendants) character Charlie and Laura Bilgeri’s character Annie as they team up with The Hunter (Wesley Snipes) to get their friends back

“As soon as I heard the words ‘alien invasion’ and ‘action,’ I was completely hooked,” Laura begins about what drew her to the project. Finding interest in how the movie wasn’t just a ‘horror’ movie but put a spotlight on the characters as well, she found working on a movie with so many “fun, emotional, intense, and thrilling” layers and a great cast and crew to be a dream come true.

Starting off as the girl-next-door joining the group, Annie joins the group as a shy but sweet girl learning the ropes of the group and finding herself drawn to Charlie. “Like you said, she’s kind of shy in the beginning but has a very strong personality—definitely a daredevil. That’s what I love about her,” she explains about how she appreciates not playing a girl that just needs saving but rather can also stand up for herself and others while also having a kind heart. “I can also be rather shy at times, so I felt totally connected with the character right from the start. It was so much fun playing her.”

At the emotional core of the film is Annie and Charlie’s budding romantic relationship with the two going from first meeting to friends, to needing each other to survive. “I love that Annie never gives up on him. Their relationship doesn’t really start off that great, but they both keep fighting for it and with Annie’s caring and loving way, they find a way to make it work,” Laura says. “One of my favorite scenes in the film is actually where they’re walking through the woods and Annie’s trying to cheer him up but failing.” The two characters stop in front of a waterfall and it’s there where the two feel that there could potentially be more between them, “There’s not a great deal of dialogue in this scene, but the way they’re looking at one another says it all. They’re in love. It felt very real and their chemistry really comes through.”

Showing similarities to her character, Laura shares with a laugh that she’d be willing to step up if she were in the same situation. “One thing people don’t really know about me is that I’m a very adventurous girl. Although I might be a little scared, I would be excited about the new experience. I mean, who doesn’t wanna fight aliens with Wesley Snipes,” she asks with a smile.

Aside from The Recall being Wesley Snipes first movie in 2017, the movie also received buzz for being shot in Barco Escape an experimental multi-screen video format first used for the 2014 book-to-movie adaptation The Maze Runner. “The screen is a lot wider so you have to carry your acting three times further than you normally would,” Laura explains what it’s like shooting on that scope. “The blockings are more involved and a lot more choreographed because the camera sees a 170-degree field of view. It was quite challenging for us actors, but the help of our amazing camera crew made it an unforgettable experience. It was absolutely thrilling to be part of something so new and groundbreaking.”

With Mauro Borrelli (the illustrator for movies such as Captain America: The First Avenger and Star Wars: The Last Jedi among other projects) as the conductor of the project, the movie one of the goals was to help the viewers experience the movie in a more personal way. “When watching a film in Barco Escape, the audience is gonna feel like they’re part of the movie, part of the story. It truly is an immersive movie experience,” she assures. In theaters, the movie plays on three screens to help surround the viewer with imagery. However, if you can’t watch the movie in theaters, Laura recommends watching the version in VR by downloading the app from the Oculus store. 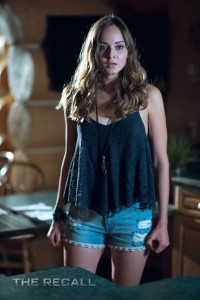 While the movie puts the characters into a life or death situation, the cast and crew got to have their own fun off camera. “We were having a night shoot; I remember it was like 4 in the morning or something. We were all tired and delirious,” Laura began about a moment that she’ll never forget from the set. “That night, we shot the scene where Wesley shoots the alien in the woods and because we had simulated gun fire, our special effects team handed out earplugs.” However, not everyone got the message that they were earplugs, “As they were handing them out, our wonderful director Mauro Borrelli was in the middle of giving scene directions and didn’t see or hear what they were handing him and popped them in his mouth thinking they were candy. After a few seconds [he looked] around and [said], ‘What kind of candy is this!”

Next, you’ll be able to see Laura in the Lifetime drama/thriller Dad Crush as the character Riley. A “shy and moody high schooler” Riley finds out that her dad (Rusty Joiner) and her best friend Kyla (Lucy Loken) are having an affair. “The first thing that came to my mind when I read the script was American Beauty—one of my all-time favorites,” Laura began about what drew her to the project. “The story was very intense and thrilling. I read the whole script within an hour. It was a real page turner. I fell in love with it immediately.” While the story shows similarities to American Beauty, Laura assures that she didn’t want Dad Crush to feel like it was just copying American Beauty, “I didn’t really use anything specific from American Beauty though. I tried to make it my own. Of course, I got inspired by the brilliance of the acting in the movie but I created my own little version.”

A fan of period movies, she cites the drama/romance Anna Karenina starring Kiera Knightley as one of her favorites, “I would have died to play her,” she explains about her dream role. “I also adore musicals that are turned into movies like Chicago. The role of Velma Kelly would be a literal dream come true. I saw it on Broadway once and was completely blown away.”

Born from a family of entertainers, Laura has roots in Vienna, Austria with her mom working an as actress/model and her father a singer/movie director. “I had an amazing childhood,” she explained about growing up there and in Italy. “I was lucky enough to experience so many different and interesting cultures when I was a kid. My family and I traveled a lot and I absolutely loved it. I also love languages. German is my first language, but I had to learn English, Italian, and French from a very early age.” Having some family in Paris, it was easy for Laura to adapt to speaking French.

“I personally feel like it’s a big advantage as an actor to be able to act in multiple different languages with no accent. But, I always loved everything American when I was a kid,” she shared about the decision to start her career here in the states. “There’s a big difference between working in LA and Austria. I feel like there’s so much respect for the craft here. Austria is a small country and so is the industry. So, moving to the entertainment capital of the world was quite an easy decision for me. However, I was very lucky to have been able to work on some amazing productions in Europe which helped me come to America in the first place.” Having the opportunity to travel at a young age is what gave her the confidence to move to America at 18 to act, she explained.

She also gives credit to her dad for giving her the helpful advice she needed. First: ‘What’s meant for you won’t pass you by’ “It reminds me not to take decisions by others personally,” she explained. The other piece of advice? Try not to take yourself too seriously.

“I grew up in a house where there was not one day without music or films,” she began about how she figured out she wanted to work in the industry. “My dad directed his first film, A Breath of Heaven when I was 14; my mom played the lead and I had a part in it. My dog was even in it so it was a real family experience. It was my first time in front of a camera ever. After the first take, I just knew that that was it! There was no plan B.” With her parents supporting her dreams, she graduated high school early and studied singing, acting, and dancing in Munich, Germany at a musical academy.

“Luckily, I was able to work on some unforgettable productions in Europe including the movie The Silent Mountain alongside the iconic actress Claudia Cardinale and William Moseley,” she finished explaining including her other credits such as The Chronicles of Narnia, The Royals, and Austrian/German police procedural SOKO Donau. “When I told my parents that I wanted to move to LA, they were so excited, happy, and supportive. Of course, it’s not easy for them, especially my mom because I’m still very young and an only child but thank goodness for Facetime and Skype. I couldn’t be happier though and I feel so blessed with all the opportunities I’ve had since coming to America.”

You can stay up to date on all things Laura Bilgeri by following her Twitter and Instagram.

The Recall is now available to stream on iTunes, Google Play, Youtube, Amazon Video, and Vudu.