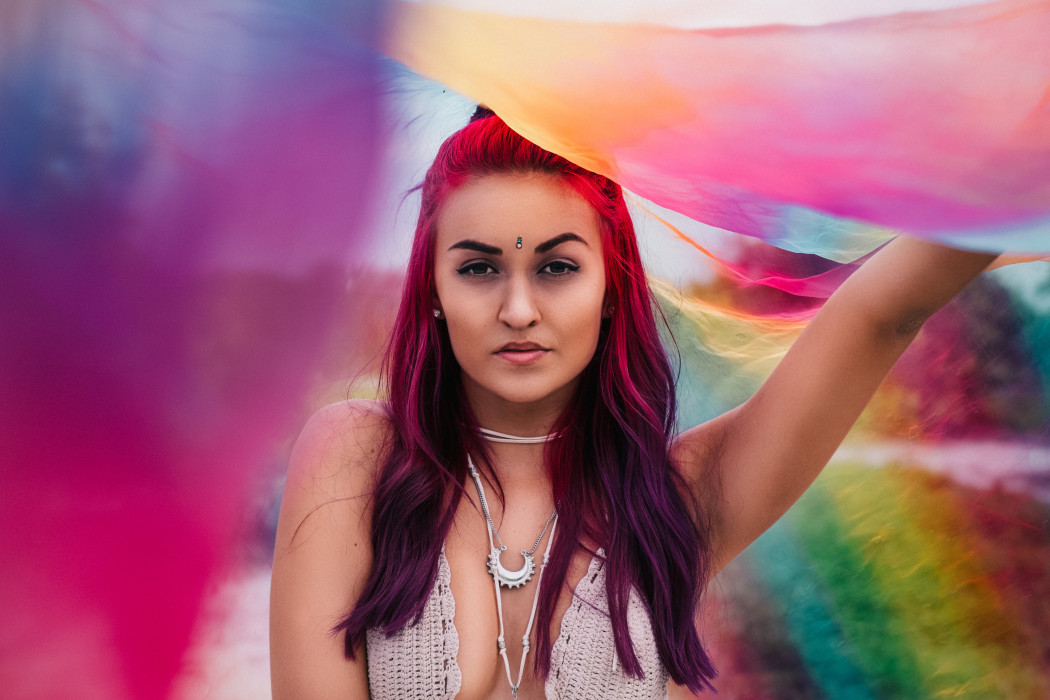 The state of being ‘iridescent’ is the state of being an ever-changing mystery, available to interpretation depending on the perspective and yet, being iridescent requires some kind of clarity. It requires an openness and vulnerability and in people, it requires a self-awareness. For singer-songwriter Ilana Armida, the inspiration to look into what it means to be ‘iridescent’ is only a portion of her journey into creating her latest EP, Iridescent Flower Child.

Graduating from Florida Atlantic University’s Commercial Music Business program, Ilana was given the opportunity to indulge her love for music that she realized at a young age. Working with the student-run record label Hoot/Wisdom Recordings, she was able to learn more about music and how to create her sound. This prepared her for the release of her first EP, Used Up, in 2013.

Used Up, a five-page R&B EP, according to Ilana’s description on Soundcloud, is an acronym for the titles on the EP. “My first EP was kind of a test run of the creative and recording process while I was in college still trying to figure out my sound,” she begins about how Used Up and Iridescent Flower Child compare. “I look at Iridescent Flower Child as my debut project and an introduction to who Ilana Armida is. The music has matured sonically, vocally, and I have a much better grasp on who I am and I’m not afraid to talk about my experiences.”

Now with Iridescent Flower Child, she hopes that listeners not only get a taste of who she is but that it leaves them wanting to know what more that she has to say.

“At this point in my life, I’ve grown pretty comfortable with being me,” Ilana says about how she allows herself to create personal music. “I’m forever evolving and sometimes it’s scary putting out music that is so personal but knowing that people out there can relate makes it all worth while.” With the goal of wanting to make genuine, feel good music that listeners can relate to, she focuses on staying true to herself.

The 7-track EP tackles different situations and feelings that Ilana has gone through herself. “It’s not necessarily autobiographical, but the lyrics of ‘This Feeling’ perfectly describe how I feel about music and performing,” she explains about the introduction track.

Meanwhile, she cites her upbeat breakup song, “Sweet Freedom” with presenting her the most surprising theme to write about, “I was driving one day after a breakup and realized how I had no one to answer to and no one to hold me back and it felt like this huge weight was lifted off of my shoulders and I kinda burst into the chorus of ‘Sweet Freedom’ and later went home to finish it.”

Having written fifteen songs for the EP, the seven that was selected was chosen because of their ability to fit together and represent Ilana’s artistry. “Most of Iridescent Flower Child was recorded in a week,” she says about the process. “‘Pretend’, ‘This Feeling’, and ‘Still Down for You’ were songs that I had been working on for a while. But the rest all happened pretty much at once. I had a lot to talk about and my producer and I worked hard to pump them out quickly. I recorded everything myself in my home studio and had it mixed by my wicked talented engineer ArTiChoKe.”

As you can read in our review or as you can hear for yourself when listening to Iridescent Flower Child, Ilana’s grasp on mixing pop and R&B with the sounds of funk and hip-hop is evident. “I’m a 90s baby so that music is embedded in me,” she says when I tell her I hear the likes of TLC, Bell Biv Devoe, Aaliyah, Britney Spears, and Mary J Blige among others in her music. “I also pull inspiration from singer/performers like Janet [Jackson], Justin Timberlake, and Bruno [Mars].”

“Music was always playing in my house when I was growing up. I remember dancing to Michael Jackson music in my living room with my dad. And we would sing Otis Redding and Aretha Franklin songs at the top of our lungs,” she reminisced on when she realized she wanted to pursue music. “I think I just loved artists who knew how to make us move and feel and I wanted to do the same thing.”

Now that she has two EPs under her belt and has worked with different recording studios including in college and EastPark Entertainment for Iridescent Flower Child, Ilana gives advice for what she wished someone told her before she got involved, “I wish someone told me earlier to learn how to produce.” With her new music, Ilana shares that she’s beginning to develop the skill. “I’m just getting into it now and it is so beneficial when you can not only write and sing but create the music as well or at least be able to explain your concept to a proper producer,” she smiles.

Gearing up to leave from Florida where she was raised to live in California, Ilana reflects on her family and the support system they’ve created for her in order to encourage her and help make everything she has accomplished so far come true. “I’m so lucky to have the most loving and supporting family ever,” Ilana mentions. “My parents have always pushed me to follow my dreams and that really let me explore what I can really do with my art.”

Iridescent Flower Child is available on all streaming platforms and available to buy on iTunes here.

When ABC’s mini-series When We Rise premieres on the network tonight at 9PM, it will be the first of four nights that document the…