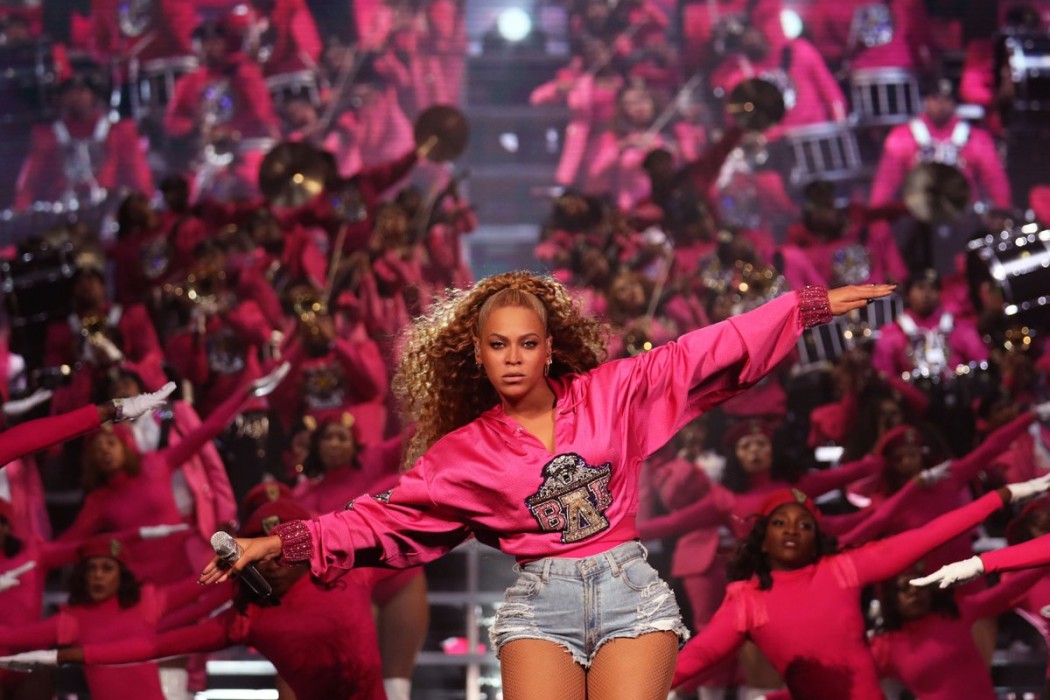 Somehow, Beyoncé manages to strategically 1-2, 1-2-3, strut the line between letting us into the personal, everyday ups and downs of her life and artistry while remaining one of the most private artists we know. She’s connected with her fans so much so that the Beyhive figured out Netflix was dropping her sophomore documentary Homecoming a week before the release and a few days before the drop of a trailer just from recognizing the font used in a graphic of the name.

Homecoming is both a concert movie and a behind the scenes documentary that intimately shows us the hard work, vision, and community that went into making Beychella a memorable, pop-cultural, empowering, and Black AF phenomenon. It’s also a masterclass on what it means to be an artist who makes stuff for the people by making yourself (and the things that make you, you) your target audience — something Beyoncé built her career off of.

I have always been vocal about my love for Beyoncé and all that she has done as an artist. When I say that I believe I’ve learned (and still am learning) from the best, I’m referring to a number of the forces life has given me. But, this cliche saying also means that Beyoncé taught me.

I was born in 1996. Pretty much for as long as I’ve been alive, Beyoncé has had a career. And pretty much since Beyoncé has had a career, I’ve listened to Beyoncé. It’s more than just the talent and the amazing music, although, let’s be honest: homegirl is so wonderfully talented with a range of music that shows she very much studies and enjoys the craft that she’s dedicated her life to. But it’s also that as a Black woman who is looked at as one of the most powerful and influential artists to ever exist when Black women (including herself) constantly face scrutiny for being Black women, she sees what she can do to uplift us and let us feel seen through anthems and performances meant to empower us.

And impact is more significant than intention every time, but that notion just adds to the point I’m making about Beyoncé which is that her impact has given me and countless other people this power to look at the things we do through both lenses and be assertive when something isn’t working out the way you need it to be. Her image, her work ethic, her humanity, and her mind have given space to this powerhouse career where she has intentionally centered her agency as a creative, passionate, intentional, and detail-oriented “country-ass” Black woman who wants her people to believe in themselves as much as she had to in order to get where she is today.

It’s easy to get caught up in the powerdom that Beyoncé holds as an artist that it can lead to dehumanizing measures. You can look at Beyoncé’s successes, talent, and dedication and it makes sense to easily attribute it to her being on a different level than all of us. But, amidst all of the chaos of her life and even the often boastful lyrics of her songs, confidence that drips in her videos, or even her tax bracket, there is nothing about Beyoncé that says she isn’t still humble and human. She, herself, has shown so much gratitude for the Beyhive supporting her enough to let her live her dream–even just the look of utter shock and emotion that shows when she watches a crowd sing her songs or sees a fan put together a replica of her first Beychella outfit, or sees the family that grows from her performers and crew.

It’s those little heartwarming and intimate moments that are used to interlude the interwoven two nights of Beychella in Homecoming. She speaks about getting inspiration for the performance from going to homecoming games when she was younger and rehearsing at HBCUs. She also notes that when she realized she would be headlining Coachella, she could either “put on a flower crown” and perform or bring our culture to the stage and make it a space for us. Due to her pregnancy, which she admits was both unexpected and rocky, she got an extra year to envision her perfect homecoming through both joy and stress.

Homecoming reflects on the tiring and hard, yet human process involved in the everyday details of living and of creating. We saw the fumbles and the mistakes that had to happen before the precision that we saw on stage. We saw the frustrating moments, the moments when nothing was working out, the moments where Beyoncé admitted all she wanted to do was be with her children, and the moments where she shared that she was struggling because she no longer felt like herself. But regardless all of those moments, she still had to continue creating, preparing for, and putting on this performance.

It’s honest and it’s inspiring to see. As she mentions in Homecoming, no one likes rehearsing because it humbles you. During any rehearsal process in life, you’re forced to reckon with the things you can and can’t do. Sometimes these things are things you can’t do temporarily, but you’ll get there if you keep trying. Other times, these things are things you just can’t do or you don’t have enough time to figure it out. Accepting that failure is hard and heartbreaking. Sometimes it can feel very embarrassing. That’s why we usually only want to show our successes. We don’t feel comfortable showing the mistakes and the amount of hard work, energy, unappealing trials and errors, and potential temptations for giving up/in that are required for final products to ideally look so seamless.

For me, it was a strong reminder that no ones behind the scenes work is glamorous and that just because something I’m working on feels helpless and stuck today doesn’t mean that I won’t figure it out tomorrow. I just gotta keep going. Maybe I’ll take a break first, but still, I just gotta keep going. I think it’s really easy to question if the things I’m doing and the art that I’m making is worth it. Sometimes dedication isn’t enough. Sometimes the endurance for messing up is low. Sometimes I’ll love something I’m making so much that I’m just ready for the finished product to be done already as opposed to me actually having to work on it because I’m afraid with where I’m at in that moment, anything I’m at the capacity to do is going to be bad and ruin what I envision. It sucks to take those down and out, pessimistic moments and smile as they keep you grounded. It’s tough love but it’s love nonetheless.

Beyoncé put so much of her passion into this beautiful love letter to her Houston roots, to her Black roots, to her people, to us. A love letter that is so complex and intricate and contains so many nods to the love, the appreciation, and the heart of the many layers of Black culture and what it means to educate yourself on and exist in it, of the many layers of what it means to be a Black creative, of the many layers of being a Black woman. She included the trials and tribulations as much as she included the triumphs through a performance that was so clearly planned to a T and yet the amount of joy, excitement, and energy that is on that stage is so natural, familiar, and real.

When it comes to groundbreaking Black legends, nonblack people immediately jump at the chance to talk about how what makes them legendary is their ability to “transcend race” or how they “appreciate” their work because their work is just oh, so powerful that the audience can enjoy it without acknowledging the artists skin color. Which ultimately translates into, the only way that person can be comfortable with such a talented Black person being so iconic and legendary is through the dissociation of blackness. Like we have not been queens and kings, artists and creators, groundbreaking and powerful and still, Black. And in a world that repeatedly erases the blackness from Black legends and masking that racism as a compliment, Beyoncé says that she’s taking where she comes from, her people, and all the dope interesting things about us with her. That you can’t and won’t uplift her, without uplifting her people and her roots because these things made her who she is.

It feels almost impossible to me to have lived through 2020 and not constantly want to be screaming. If the want is not constant,…