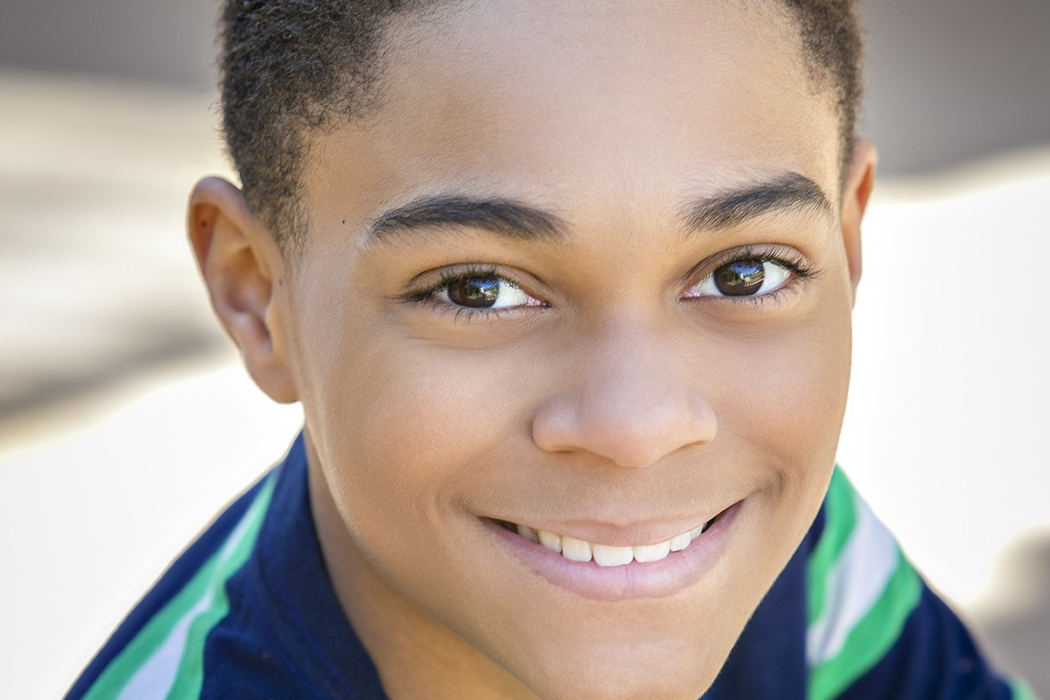 Starting tomorrow, Netflix’s collaborative efforts with DreamWorks Animation and Amblin Entertainment in bringing an animated Jurassic World series to screen will be on display for all to see. The show is Jurassic World: Camp Cretaceous and it is groundbreaking for the franchise in many regards – the first television series in the universe and the first animated venture outside of LEGO.

With fans highly anticipating the third film in the Jurassic World series, Jurassic World: Camp Cretaceous offers them a fill of their missing dinosaur desires, all the while hooking them into this new story that focuses on a group of campers during the events of 2015’s Jurassic World.

“Jurassic World: Camp Cretaceous gives viewers an inside look at what is happening on the other side of Isla Nublar, and let’s just say the grass isn’t always greener!” teases Paul-Mikél Williams, the voice behind lead protagonist Darius. “Six campers are chosen as a test run to explore a brand-new adventure camp in Jurassic World! Kayaking, zip-lining, arts and crafts, and all of these activities are done around larger than life dinosaurs!” Things don’t remain picture-perfect for long, however. “When dinosaurs break loose, these campers are left to fend for themselves! Secrets are exposed, friendships are on the line! These campers must go from kids that just met two days ago to a Survival Party that knows each other inside-out!”

Trailers and the few clips that have been released from the show have displayed the different thrilling and intense moments that the campers experience, especially Darius. From being chased and almost eaten by dinosaurs, to almost getting stuck in a cage with one, there are plenty of nail-biting moments ahead. 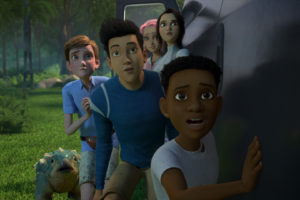 “Oh, you’re going to get a LOT,” Paul-Mikél exclaims of the high-energy situations the campers face in the series. “Camp Cretaceous is filled with crazy adventures! From teenagers driving cars to kayaking in water you REALLY shouldn’t be kayaking in, Camp Cretaceous is guaranteed to give you chills and goosebumps!”

The level of excitement and hype that stems from Paul-Mikél is as evident as that of his character Darius, whose lifelong dream of visiting Jurassic World has finally come true.

“I play Darius, the dinosaur genius. He is most excited about being at camp and seeing his one true love since he could walk – dinosaurs!” he says of his character. He continues, “He may be young, but there is nothing he can’t do if he sets his mind to it and has confidence! Darius’ love for and knowledge of dinosaurs, the ability to wear his heart on his sleeve, and his constant optimism and determination make him priceless to his camp family.”

Also, they’re herbivores – so no risk at getting eaten!

Optimism is a mindset that Paul-Mikél shares with his character, according to the actor. He says that they both try to make the best of any situation. “We’re always very enthusiastic and, no matter what, we always keep a smile on everyone’s faces.” Thinking of how he would compare to his character if he were suddenly thrust into a similar situation, he says, “Though I may not be perfect at it in the beginning, I would try my best to take the leadership role that Darius is capable of handling.”

It will be interesting for viewers to see how Darius fits into the dynamics of the group and how it will play out on screen, with the initial first impressions of each other not always showing who they truly are.

“To go more in-depth, none of these campers really connect with each other in the beginning of the show because they have nothing in common,” says Paul-Mikél of how the dynamics of the group changes as the season goes on. “But, like real life, they get closer to each other, discovering new things about one another that they do have in common – running from dinosaurs kinda being a catalyst for that – and building a strong family bond over the course of time.”

As thrilling and satisfying as it is to watch the group befriend and understand each other more over time, Paul-Mikél seems to tap into his character as he talks about what he is most excited for viewers to see. “The DIONSAURS!” he cannot help but exclaim. “Kudos to all of the animators, animation directors, and producers because I was in awe at how spectacular this all looks. The Indominus gave me chills, Ankylosaurus proved why it is still my favorite dinosaur, and you can’t help but let out a great big ‘Awww!’ when you look directly into a Brachiosaurus’ eyes. I know the viewers are going to love them as much as I do. I mean, how can you not?!” 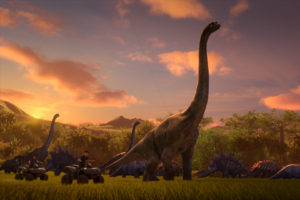 For Paul-Mikél, the opportunity to portray Darius has been more than just another job. As a lifelong fan of the franchise, this show has become a dream come true. “Jumping into such a franchise that has been idolized for nearly thirty years is… how do I put this… unbelievable! To be in the same club as Colin Trevorrow and Steven Spielberg is what so many people dream of.” He expresses his thanks, “I am so grateful that God has given me this opportunity.”

Thinking back to how it all began, the actor remembers the day he received the news he was cast in the newest adventure within the Jurassic Park universe. “My mother and I were jumping up and down, over and over!” he exclaims. “When we got that call from my agent, we were more than excited to be venturing into the controlled chaos of Jurassic World: Camp Cretaceous!”

With such a massive following for decades, it comes as no surprise that, when asked if he was nervous about joining this new pathway for the franchise, he says, “HECK YEAH I was nervous!” However, that wasn’t a bad thing. “I knew I had to step up my game to be more professional and skilled, and I intended to do just that for Camp Cretaceous.” Early reviews for the show already indicate that Paul-Mikél performs his heart out as Darius, going above and beyond to give an incredible performance.

“Camp Cretaceous has been one of the biggest highlights of my life,” Paul-Mikél says. He recalls recording for the series fondly, “Everyone loves to crack jokes on both sides of the glass, and everyone loves it. I have a great time recording and will forever cherish the memories.”

Unlike live-action shows where the actors interact with each other in real time, voice recording often finds the actors performing and recording their lines alone in the booth. The series calls on the acting talents of Ryan Potter, Raini Rodriguez, Jenna Ortega, Glen Powell, and Jameela Jamil, amongst others. Ryan Potter, coincidentally, is an actor that Paul-Mikél has looked up to for years.

But all in all, I’ll always have the same, if not greater, love for the franchise as a whole.

“Now, that’s a tough one!” the young actor begins when asked who he would have loved to perform alongside in the booth, before ultimately choosing Ryan Potter, the voice behind Kenji in the series. “From the get-go, my childhood was filled with animated movies, and fun fact: I purchased Big Hero 6 (which Ryan stars in as ‘Hiro’) to watch over twenty times!” He recalls, “My mom was furious with the rental bill, but recording with him just made my day in the best way possible.”

It comes as no surprise then, given his love of animated films and appreciation for voice acting, that when asked which actor – past or current – he would want cast in Jurassic World: Camp Cretaceous to join Darius’ group and what their role would be, Paul-Mikél says, “One actor that I would have loved to co-star with would have to be Robin Williams. He was a universal performer. God bless him for giving us all something to laugh at and reminisce about.” He describes the kind of addition Robin’s character would have made to the group, “His character would probably be the class clown of the group, or a third, more ‘by-the-book’ camp counselor to co-counsel along Dave and Roxie.” 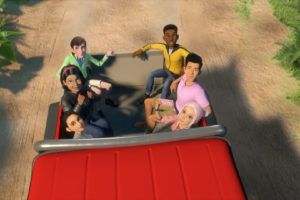 Considering the fact Paul-Mikél shares a similar enthusiasm for dinosaurs as his character, it particularly shines when he discusses which Jurassic World attraction he would love to ride if it were real, declaring the Gyrosphere.

“Gyrosphere rides alongside Ankylosauruses! The ‘Gentle Giant’ feels of an Ankylosaurus always puts a smile on my face. Also, they’re herbivores – so no risk at getting eaten!”

However, if given the chance to have starred in any of the Jurassic Park/World films that are out now, he has to stay with the original. “If I could have starred in any movie, it would one hundred percent be the first Jurassic Park. The reason why is because that scene when the Raptors opened the kitchen door was one of the most iconic moments,” Paul-Mikél says of the scene that unlocked a fear in kids and adults that terrified them long past the end credits, similar to the way Jaws did nearly two decades prior. The tense moments of waiting, not even wanting to breath in case it gave their location away after the talons of the raptor opened the locked kitchen door, haunted viewers memories, and forever etched the moment in their minds.  “Hiding in a kitchen with dinosaurs?! No way I could pass up that cinematic moment!”

Of course, if he were able to take a role in any of the live action films, he knows just what advice he’d go to his character for. “A question I’ve always wanted to ask Darius is, ‘How do you run so fast?’” Paul-Mikél says with a laugh. “Darius is shorter than most of the other campers, but dang, can he run!!”

Being a part of the Jurassic Park franchise through Jurassic World: Camp Cretaceous has heightened Paul-Mikél’s enjoyment of the films in a way he didn’t think possible.

“Even with being cast in the show, my fan love for [the films] has not changed. I love to point out Easter Eggs that I got to record and read about when I rewatch the films,” he gushes. “But all in all, I’ll always have the same, if not greater, love for the franchise as a whole.” 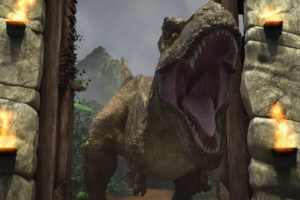 Tomorrow, audiences will get a slice of that same enjoyment. For now though, Paul-Mikél is wrapping his mind around the fact that the series is finally premiering.

“The main thought that I have in my head right now is how many young fans I am going to reach. This is the first animated Jurassic Park/World TV show!” Paul-Mikél exclaims as he discusses what is going through his mind ahead of the show’s release. “I want to be as much [of] a role model to younger generations as the Voice and On-Camera Actors that I have idolized have [been] for me.” He is sure to show his gratitude, saying, “Thank you so much to DreamWorks Head of Casting, Ania O’Hare, and everyone that worked to cast me. I couldn’t have done it without you.”

He spreads his enthusiasm once more as he addresses the shows’ expecting audiences.

“YOU ARE GOING TO LOVE THIS SHOW!!!” Paul-Mikél exclaims, showcasing the immense amount of enthusiasm, love, and pride he has for this series. “The dinosaurs are amazing; these characters are phenomenal! This show is made for all ages! So, all ages, be sure to check out Jurassic World: Camp Cretaceous, premiering Friday, September 18th on Netflix!”

“Stuck in the Middle” with Kayla Maisonet

Developed by Alison Brown and Linda Videtti Figueiredo, Stuck in the Middle follows middle child Harley Diaz (Jenna Ortega) as she and her large…