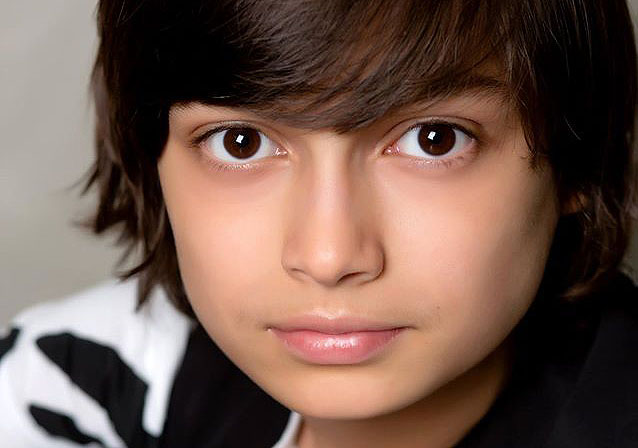 There are few better motivators out there than knowing that someone younger than you has already achieved so much. Such is the case with Rio Mangini, a twelve-year old actor and classical pianist prodigy who’s already played Carnegie Hall twice, the first time when he was only 9. “The first time I performed at Carnegie Hall I made a small mistake that I actually played an extra verse- no one noticed- I don’t think I even realized,” he says. I think my mom was more nervous than me.”

Since then, Rio’s appeared on shows such as Disney’s Kickin It!, Good Luck Charlie, Switched At Birth, and Nickelodeon’s See Dad Run and Marvin Marvin. He currently plays Ace McFumbles–the mustache-wearing school news reporter–on Nickleodeon’s Bella and the Bulldogs and is voicing a character in the animated film B.O.O.: Bureau of Otherworldly Operations alongside such actors as Matt Bomer, Seth Rogen, Rashida Jones, and Octavia Spencer.

“Voice acting is a little harder for me because you’ve got to put all your character into your voice,” Rio shares. “You’re making the voice of a cartoon and the cartoon can’t portray much emotion. You have to make all the emotion come out in the sound of your voice because the audience can’t see you make faces or expressions. Its really cool to finally see your voice on an animated character- I love it.”

When it comes to acting and performing, Rio says that he never gets nervous on set but that he does before performances. “When I play piano I have to be well warmed up and tight,” he explains. “I have to practice extra before a performance to make sure I’m solid and each song is in shape- kind of like an athlete. I’m always afraid I’m going to make a mistake.” It’s understandable: with live performances, there are no second takes.

Rio and the cast of Bella and the Bulldogs were recently nominated to be slimed at the KCAs, which he raves about. “The KCA’s were SO great , everything was so hype- I was so excited just to go! We were sitting behind 5SOS and the cast of Modern Family and right in front of the cast of Dance Moms- those girls can scream!” he shares. “They did a live audience vote DURING the show! (The coolest -the showed our picture up on the big screen!) The Thundermans got it but there’s always next year! (not gonna lie I wanted to get slimed!) The KCA’s are the greatest thing in the history of mankind.”

My life is my life.

Aside from the fact that I know work is work and I have to be responsible and professional- my parents, manager, agents, publicist and lawyer do all the business stuff. I just act. And answer questions in interviews 😉

“I just act,” he says, as if it’s a small feat. When it comes to future roles, Rio says that he wants to do an action film sometime. The catch? “I don’t want to play a little scared kid- I’d like to play one of those main characters that saves the day! [M]aybe something like X-Men. I love Teen Wolf too!”

Despite his atypical lifestyle, Rio argues that his personal life hasn’t really been affected. “I still live a normal life. I’m just busy like other kids. Instead of sports and school stuff- I have a auditions, piano practice, shooting our show and answering questions in interviews,” he says, complete with a winking emoticon at the end (I should’ve seen it coming). And it’s true–aside from acting and playing piano, Rio’s interested in drawing, video games (“I LOVE the original Super Mario Bros”), and EDM, or electronic dance music.

“I’m obsessed with this record label out of Vancouver called Monstercat. They release single tracks from independent artists and I love a lot of them. They release a song Monday-Wednesday and Friday. I wake up in the morning waiting for the songs to be released- then I play them over and over. Each artist has their style- and my style is that I’m going to morph my classical piano into my EDM and see what happens. When we were in Vancouver my mom found Monstercat studios just so I could take a picture in front of the building!” he says.

I admire our producers, directors and writers too- I learn from them everyday.

Amongst all of the success, Rio still manages to be very gracious. He lists his cast and crew as people who he admires, right up there with his idol Hugh Jackman. “He’s one of my idols- he’s a really great actor and performer – he’s a really good singer he can do anything.” He continues, “I admire my cast because they are all so funny and good actors. I admire our producers, directors and writers too- I learn from them everyday. I also admire a lot of EDM artists because I aspire to that. I love Haywire he incorporates his jazz and classical into his songs and I think its really unique and I’m doing some of that too!”

There’s a lot to admire about Rio himself, from his incredible talent to his sense of humor. We’re definitely excited to follow his career as he continues to prosper.

“Bella and the Bulldogs” airs Saturday nights on Nickelodeon.

For actors that will be starting a recurring role on a beloved show, there’s a lot that goes through their minds. Will the fans…