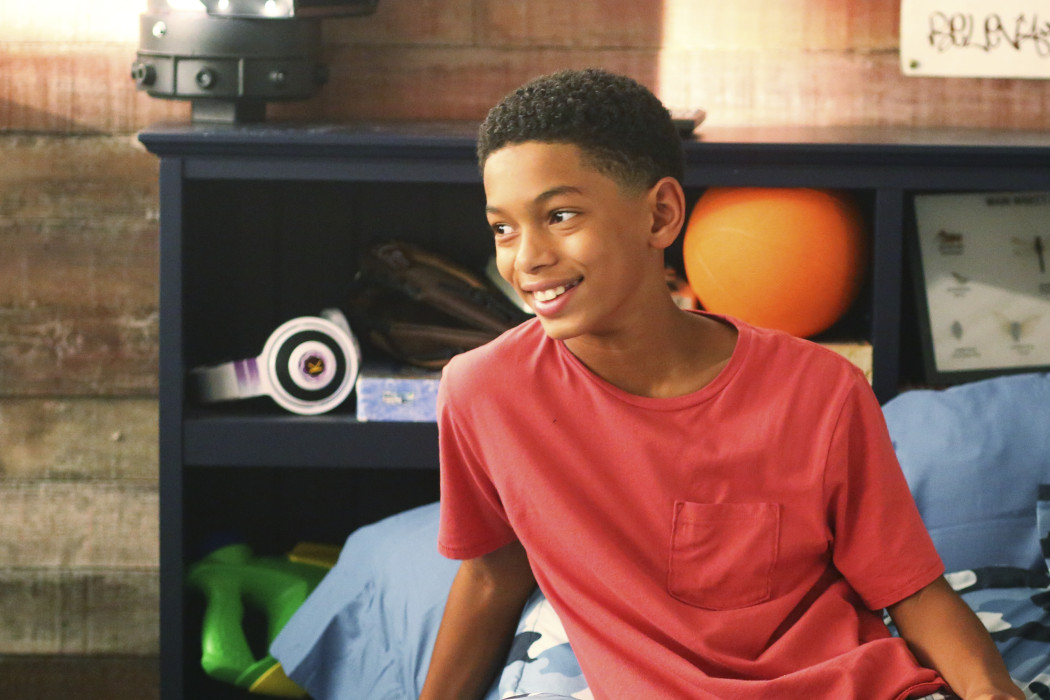 Originally a John Hughes movie starring John Candy, Macaulay Culkin, and Jean Louisa Kelly, Uncle Buck focuses on unconventional, fun-loving yet good-natured, Uncle Buck as he moves into his brother and step-sisters house to raise their kids. ABC’s latest show, Uncle Buck, developed by Brian Bradley and Steven Cragg follows the same premise, this time starring Mike Epps, Nia Long, James Lesure, Iman Benson, Aalyrah Caldwell, and Sayeed Shahidi. “So basically, once I heard that I was going to be auditioning for Uncle Buck, I had to go back and watch the original movie,” thirteen-year-old Sayeed explained about how he prepared for the role of Miles Russell, originally played by Macaulay Culkin. “It was really a lot of prep but it was also enjoyable at the same time. So I first went into the initial call and everyone was so nice they really told you what they were looking for and it worked so I had the callback and I read with a producer and it really just flowed.”

“Well, my character is somewhat of a mischevious guy ,” Sayeed laughed, “I’m not going to say I’m mischevious, but my character is wise above his years and I’m sorta like that.” In the pilot episode released early on ABC.com and Hulu, we’re introduced to Miles and Maisey (Aalyrah Caldwell) as they chase their nanny around and shoot her with a Nerf gun, which Sayeed says, through laughter, is his favorite scene. “At first, I felt a little bad and a little guilty, like ‘I don’t want to be shooting her’, and she was like, ‘Don’t worry about it.’ Then, I think after the third time we did it, I don’t know if this sounds bad, but it felt natural and it flowed a little better.”

While the episodes of the show were shot out of sequence, ABC plans to air them back to back so every Tuesday, two new episodes premiere. And according to Sayeed, his favorite episode is definitely one to keep your eyes peeled for. “One of my favorite episodes was when,” he laughs, “a glass window got broken and all the kids had to tell their own story and how they saw the thing play out and all of their little imaginations can come through. It’s hilarious.”

And of course, not only is the show hilarious on camera, the cast is hilarious off camera as well. “Well, really all of the laughs that we have outside of shooting,” Sayeed answered right off the bat about his favorite thing working on the show. “Just, like working with Mike [Epps], you never know what he’s going to say, and really, like, the family felt genuine. It felt like a second family for me.” Working with already established actors such as Mike, Nia, and James, Sayeed found himself learning a lot, “Well, really, we all sort of connected. And it wasn’t like a strange thing where I had to act like I have to be a certain way around them. It was really natural. But it also gave me like a little layer, a lot of different experiences, and just really seeing how professional I could be.” He then added,  “And they’re great people like, just in general. It was amazing working with them. Like, with Nia, she’s so motherly in a great way.”

“Yeah, my sister and my mom…my sister really acts like a mother,”  Sayeed said about his sister, Black-ish star Yara Shahidi, when talking about how similar the Russell family is to his own family. “She’s almost as motherly as my mom if not more because sometimes my mom will have to calm her down like, ‘Don’t worry, I got it, you can relax.'”  He laughed as he continued, “Yeah it’s a great thing, she’s always looking for out for us. But, everybody has an Uncle Buck in the family and it’s like, my little brother, I see him as like the Uncle Buck. He’s just all over the place.”

“Pilot” – Uncle Buck (Mike Epps) is a charismatic hustler who has gotten by on his charm for years. But when his brother Will and sister-in-law Alexis move to town and need help with their kids, he steps up to become their “manny.” Their lives will never be the same. This all-new comedy series based on the beloved hit film premieres TUESDAY, JUNE 14 (9:00-9:30 p.m. EDT), on the ABC Television Network. (ABC/Nicole Wilder)

With both his mom and his sister in the acting industry, Sayeed admits that he has learned a lot from them, “My sister is really the one who made me wanna star acting. I don’t know if I was like jealous of her as a little kid or because it looked really cool,” he laughed. “Probably a mix of those. But, they’re really my go to, they help me out a whole lot. My sister being so successful,I really can just see what right steps I have to take.”

Sayeed and Yara have already worked on the film Alex Cross together and an episode of Black-ish titled “Any Given Saturday,” which he said would be really cool to do again with her. But, his dream project to work on with Yara, involves them joining the Marvel universe, “Probably a superhero movie. I know that Yara, her dream is to become Nick Fury’s long lost daughter, that’s what she’s wanted for a long time. My favorite superhero at the moment is Black Panther, I just think he’s so cool.”

Sayeed has also recently starred in the short film, The Sand Box, written and directed by Jennifer Kramer. The film focuses on a young boy, Finn (played by Sayeed), as he tries to reconnect with his dad after he returns from Iraq ridden with PTSD. The film premiered at the Minneapolis St. Paul International Film Festival to rave reviews and awards.”Well, I was actually born in Minnesota so it was really great to go back to where I was born. That was actually my first winter there so it was a little overwhelming, like, negative 12 degrees plus 30 wind chill. But, it was really enjoyable. All of the cool experiences because I live out in California, I’m not really used to all of the snow and all of the differences, it was really cool, I had a great time,” he said about his experience working on the movie. “They actually sent a lot of information and I got to meet my cast members pretty far ahead of the time, before we started shooting. But, it was a really fun process.”

A soon to be high schooler and hopefully a member of his school’s team, Sayeed is more than prepared to balance multiple things at once. “It’s really about what decision I make,” he answered about how he manages to do basketball, acting, and school. “But, actually, this morning I had my second high school basketball tryouts. So, it’s really about time management. Like on the set of Uncle Buck, the schooling process is actually very simple and the teachers at my school are very willing to help us out and do what it takes to make it as simple as possible. And I have amazing teachers on the set. It’s really about balancing time.”

Instead of being nervous, Sayeed is actually thrilled for high school, looking forward to the different atmosphere it has to offer, “New experiences, new people, I mean, this is really general, but high school has a whole different feel to it than middle school. It’s like the general feel that you get when you go into a high school. So I’m just excited for that.” He’s also not worried since he’s not going through this big change alone, “Not really because it’s going to be a really simple transition because I think, only three boys from my school are not going to Saint Francis.”

Similar to his sister, he’s also a big fan of school which for him came from the influences of his teachers and his family, “Well, my middle school teachers are just really good at intriguing kids. I mean, when I was a kid you always claim nobody likes school or, ‘I don’t like school.’ But, I really got into that and also history. My whole family is a big history family and I really got into that. My parents, my sister, my grandfather, just talk, talk, talk for a long time about history and I was just like, ‘Oh! I wanna do that with them!’ And I really got into it.”

As we began to close out our interview, I asked Sayeed about his volunteer work with St. Judes Children’s Hospital. “I actually had a family member who had to go to St. Judes because of cancer and they really helped him along the and helped him live a lot longer than he would’ve if he hadn’t gone,” Sayeed opened up. “So I’m very appreciative of them and what they do is so great and their events are so fun and everything is great about it.”

Featured Image: UNCLE BUCK – “Ride Along” – Alexis insists on riding along with Buck on his first day as nanny. But as Buck deals with a cranky school principal, searches for gluten-free cupcakes and stages a small break-in to obtain special food for the family’s allergic dog, he drives Alexis to the brink. Back home Will tries to prove that he’s capable of taking care of Miles, who is home sick from school, on “Uncle Buck,” TUESDAY, JUNE 21 (9:00-9:30 p.m. EDT), on the ABC Television Network. (ABC/Michael Ansell)

For Star Wars fans, there’s no greater gathering than Star Wars Celebration. The convention brings together fans from across the globe over the course…